4 Reel Kings is a rather simplistic-looking slot game by developer Novomatic. What sets it apart from most other slot games, however, is the fact that it has 4 sets of reels. The backdrop is a simple blue color with fleur de lis stamps across the whole thing. This simple design continues onto the reels, where you will see typical slot machine symbols. Interestingly, though they do feature the lower value playing card symbols, they’re actually not the lower value symbols here. Those would be the plum and cherry symbols, which are also typical slot machine icons. Following them are the 10, J, Q and K playing cards. Finally, there is a bag of gold coins and three different colored lucky 7s: red, yellow and blue. You can collect matching colors to make winning combos, but a combination of 3 different colors will also offer a payout.

Each of the four sets has 5 reels and 3 rows, with a total of 20 paylines each. After every spin, you will move on to the next set of reels for your next spin. The paylines are fixed, so there’s not much to regulate there. However, you can set your desired bet amount anywhere in between 20p per spin and £100 per spin. The RTP may come across as a little bit disappointing, though, at only 94%.

This slot game features a jester hat, which is the Wild symbol. It doesn’t have any value of its own, but it can replace any of the other symbols to help create winning sequences. But note that it will only appear on the three rightmost reels 3, 4 and 5.

4 Reel Kings has only one bonus feature to offer, and it’s a random one at that. It can occur at any point during the game, after any given spin. At this point, anywhere up to 5 Reel Kings will appear. They have a very close resemblance to Humpty Dumpty, so you can’t miss them. Depending on the exact number of these chubby characters, you will receive a certain multiplier on your total stake. The maximum possible amount you can count on is up to 500 times your stake. 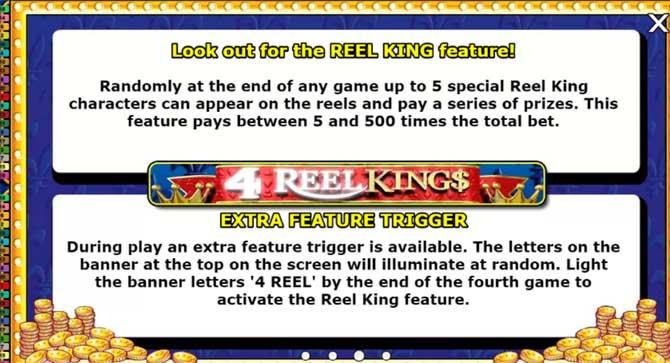 What’s more, you can even retrigger this feature, which isn’t really all that common with random bonus features. You will have four spins to manage to light up the ‘4 Reel’ part of the title above the reels. If you manage to do this, this will automatically retrigger the Reel King feature, making for another multiplier on your total bet amount.

4 Reel Kings isn’t exactly the most exciting slot game on the market – that much is certain. However, the fact that there are four sets of reels on the screen may add a bit of diversity. All in all, though, we can’t really say that it makes up for the lack of genuine bonus features and not particularly high potential winnings.