Super Diamond Deluxe is all about the sparkles and pizzazz. Brought to us by software manufacturer Blueprint Gaming, this game will greet you with a silky red backdrop that reaches beyond the controls and spills down beneath them. The graphics here are very simplistic, but also of pretty high quality as well. The symbols on the reels picture the lower value playing card symbols, including A, K, Q, J and 10. Each comes in its own color and following them is a set of different jewels. First up is the green emerald, after which is the blue sapphire, red ruby and finally – the dazzling white diamond. The soundtrack is rather simplistic and primitive even, and you’ll be hearing it exclusively when the reels are spinning.

The setup is also pretty simple, featuring 5 reels and 3 rows. There are only 10 paylines here and you will not be able to adjust their number. As far as stake amounts go, you can enjoy a pretty flexible range of between 10p per spin and £500 per spin. However, the RTP is a rather low 92.03%.

The highest paying symbol on the reels is – you guessed it – the diamond. It offers payouts of up to 500 times your line bet for 5 symbols in a row. However, if you manage to cover all the positions on the screen with diamonds, you will score a whopping 10,000 times your line bet.

You will notice that gameplay here is pretty much as simplistic as the design would suggest. That means there are no special symbols to benefit from: no Wilds, no Scatters. But that’s not to say that it doesn’t have anything to offer at all. Unlike with most other games, players can actually land winning combos here that don’t necessarily start with reel 1. Here winning sequences can begin from any one of the first three reels, so that’s certainly something worth considering. 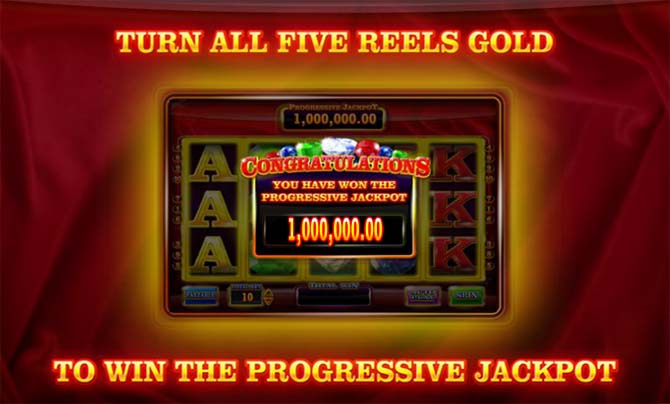 And the second most attractive feature here is the Progressive Jackpot. This is a random feature, and as a result of it you will need to turn all the reels gold. Once this happens, you will score the jackpot.

Super Diamond Deluxe may not be a game for everyone, especially those expecting more action and variety in terms of bonus features. Frankly put, there are not bonus features here. Nevertheless, gameplay can prove to be pretty dynamic and even rewarding thanks to the way you can form winning sequences.