Flame Dancer is a colorful and very visually rewarding slot game by software developer Novomatic. It centers on Hawaii as its theme and pictures the beautiful island landscape in the background. The developers have avoided using the cliché, daytime scenery, and have instead focused on a more subdued, early evening color scheme. The soundtrack here is for the most part the same as in most other Novomatic slot games. The symbols include the regular playing cards, which hold a lower value, with 10s being the least valuable symbol. Following them are some iconic Hawaiian objects, such as the coconut cocktail, a guitar with a flower garland, a set of hand drums and a picturesque volcano. We ought to point out that the quality of the graphics here much exceeds that in previous games by this developer.

The layout here comprises of 5 reels and 3 rows, with a total of 20 paylines, whereas you are free to adjust that number to less. Stakes here have a comfortable range of 20p per spin up to £100 per spin. The RTP here is also rather typical for games by this particular slot manufacturer at about 95.29%.

Flame Dancer features a dancer, blowing flames out of his mouth, as the Wild symbol here. He can appear only on reels 2 and 4 and will replace any symbol, save for the Scatter. What’s more, though, he’s also an Expanding Wild, meaning he can cover the entire reel he lands on. This automatically increases your chances for higher wins. 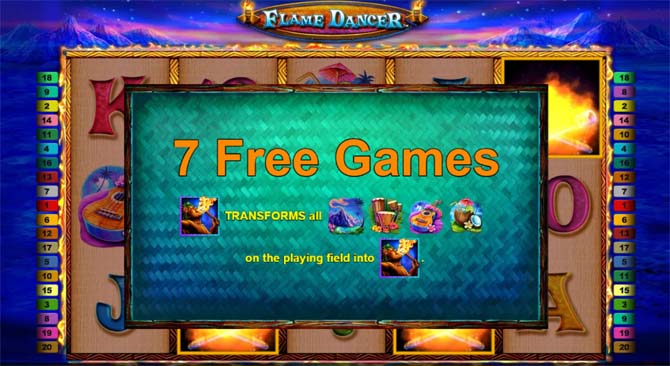 Moving on to the Scatter symbol, it represents two crossed flaming torches. The Scatter symbols can appear anywhere on the screen, but in order to make the most out of them, you will need to land at least 3 at a time. This will trigger the freespins feature, awarding you 7 freespins. But there’s a juicy extra to these spins. Any time you land a Wild symbol on the reels, all higher value symbols in sight will turn into Wilds. In addition, you can also retrigger the feature by landing another 3 or more Scatters on the reels. This will give you 7 more freespins on top, making for a total of 14 freespins.

Finally, this slot also has a Gamble feature, to spice up gameplay in the base game. Each winning spin will give you the opportunity to either collect or gamble your prize. If you opt for the latter, you will get to play a simple card game, in which the objective is to guess the correct card color. You will have a 50/50 chance of either doubling your prize, or losing it altogether. 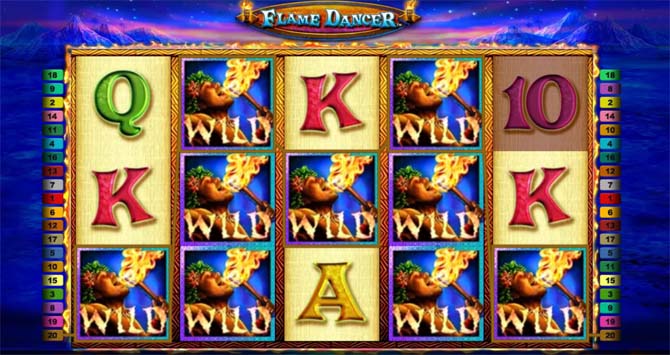 Flame Dancer has surprisingly much to offer. You wouldn’t normally expect to see a graphically rich piece from this developer, and while it’s not all 3D and HD, it’s still a very pleasant change. In addition, the freespins feature in combination with the Expanding Wild is also an appealing treat. The volatility of this game is not as high as we have come to expect from Novomatic, but you can still win some very big wins with the maximum payout of 400x in a spin during the bonus feature. Flame dancer is a very fun machine from Novomatic, with a innovative bonus feature with good potential.