Alice in Wonderslots is an online slot game by software provider Playson. The Alice in Wonderland theme isn’t the most popular one for casino slots, but we’ve certainly seen different takes on it from different developers. This one here is ablaze with fine detail, an enchanting soundtrack and really great graphics. The backdrop pictures a leafy, dense forest, intentionally pushed back in the distance to bring out the reels – and with good reason, too. You will notice that even the low value card symbols that are present here are worthy of admiration. They include A, K, Q and J. And as for the character symbols, they include a mouse, the White Rabbit, the Mad Hatter and the Queen of Hearts, among others. 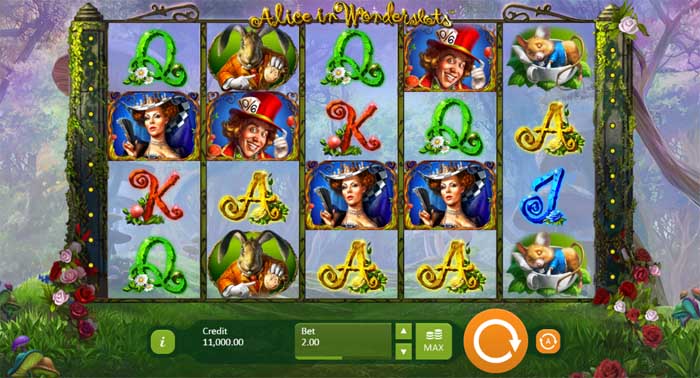 The setup here is slightly more unusual: instead of the typical 5×3 grid, this one features 5 reels and 4 rows. There are 20 paylines in total here and they cannot be adjusted by the player. On the contrary, you are very much free to regulate the betting amounts to your liking. Stakes here start as low as 20p per spin and reach up to £60 per spin. The Return To Player here isn’t all too high, though, at only 95.21%.

The Wild icon in Alice in Wonderslots features none other than the Cheshire Cat. It is also the second most lucrative symbol on these reels after the Scatter. In addition, it can also substitute for any of the regular symbols to help create winning combinations. The only exceptions to this rule are the Alice and Scatter symbols.

Starting with Alice, she’s certainly a one of a kind symbol in this game. She isn’t tied to a specific value, instead, each pair of cells you land with her will reward you your stake amount. And just as we know it happened in the popular Lewis Carrol story, Alice has the tendency to grow. This means that every time she appears on the reels, she can expand. If she is on the second row, she will expand one up, and if she lands on the bottom – she will cover the whole reel. 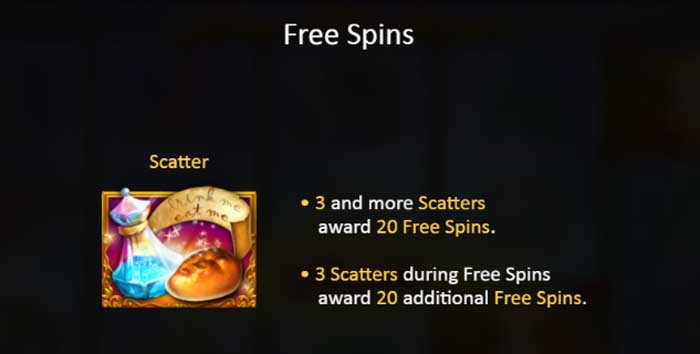 The Scatter symbol pictures the bottle and bun with the ‘Eat me, drink me’ labels. As we already mentioned, it is the most valuable symbol on the reels. And not only because of its payouts – it is also responsible for triggering the freespins bonus feature. You will need to land at least 3 Scatter symbols in order to receive 20 freespins. And if you manage to do the same during the bonus round, you will receive another 20 freespins. All in all, you will have the potential of receiving a total of 40 freespins.

Alice in Wonderslots is a great slot game with lovely graphics and a compelling soundtrack to reinforce the theme. Gameplay is pretty simple and straightforward, but watch out for the variance. This is a highly volatile slot game, meaning it won’t take kindly to careless playing.