Blazing Star is a retro styled slot game by software provider Merkur. If you are a fan of old school slot machines, you’re certainly going to enjoy this one. We know that all the biggest slot game developers have been creating slots that mimic the way the vintage one-arm bandits look. While some are better than others, Blazing Star certainly has a very charming appearance. In accordance with the title, the backdrop displays the blazing sun, which we all very well know is a star. The symbols represent the typical fruit icons. They start off with the cherries and go on to include oranges, lemons and plums. Following them are the higher value symbols: the grapes, watermelons and finally – the sun.

The setup of Blazing Star is just as simplistic as the style would imply, but not overly so. There are 5 reels and 3 rows in total, with 5 paylines. The paylines are not subject to adjustment, however, you can enjoy a rather flexible betting range. Stakes start with as little as 5p per spin and reach up to £10 per spin. The RTP is average for most Merkur games and is at the 96.31% mark.

As this is a retro styled slot game, it stays true to its theme even with the special features. Namely, it has none. There are no Wild symbols, no Scatter symbols, no freespins and bonus rounds. This may automatically turn some players away, but for others – this may be precisely what they want in a game. And as we already pointed out earlier, there is one unusual symbol on these reels and it’s the sun. It is also the highest value symbol, offering payouts of up to 100 times your total stake. So that may be something you might want to look out for, while spinning these reels. 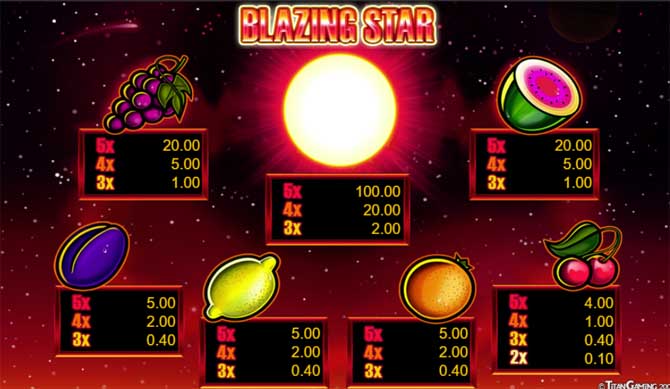 Other than that, however, it’s all just the base game and the traditional Merkur Gamble feature. What’s remarkable about it is that you can actually select the type of Gamble feature you would like to play. After each winning spin you will have the opportunity to either gather your winnings or gamble them and potentially multiply them. Your first option in the Gamble feature includes the familiar side game of guessing a card color. It will present you with a deck of cards and it will be up to you to determine the color of the top card: black or red. This is a double or nothing game, where you may have several attempts. The second option will involve climbing a ladder, where you can win cash prizes. The maximum you can gain in both features is £140.

Blazing Star offers a very high quality gaming experience, even despite the lack of elaborate bonus features. The graphics are great and the nifty Gamble feature offers just the necessary amount of diversity to gameplay. Furthermore, this is a high variance slot game, so big wins can be just around the corner.