Magic Mirror is a slot game by software provider Merkur Gaming. As is often the case with this developer, Magic Mirror has a medieval and fairytale kind of theme and features all the mot typical imagery that comes with it. From unicorns, to magic rings and mysterious women in green robes – it’s all as magical and 80s TV series like as you can imagine. The graphics aren’t the most modern and sophisticated kind, though. However, Merkur slots are notorious for their high volatility, so large payouts can be waiting for you, just around the corner. But that’s also an equally important sign for caution – you wouldn’t want to lose your entire bankroll in just a few spins. Aside from the higher value magical symbols, you will also see the neatly styled lower value playing card icons. They range from Ace to 10.

The layout of Magic Mirror features the regular 5 reels and 3 rows, with a total of 10 paylines. Their number is, however, not subject to adjustment. But you will have a relatively flexibly betting range of between 10p per spins and £20 per spin. As for the RTP, most Merkur games tend to be around the 95-96% mark, with the RTP of Magic Mirror set at 95,94%.

The Magic Mirror symbol – you’ll recognize it by the mystical energies in it and golden lion head above – is the game’s main special symbol. It acts as both the Wild and the Scatter symbols at the same time. And as such, it can substitute for any of the other symbols to help create winning combos. In addition, it can also appear in any position on the reels, which also doesn’t hurt. 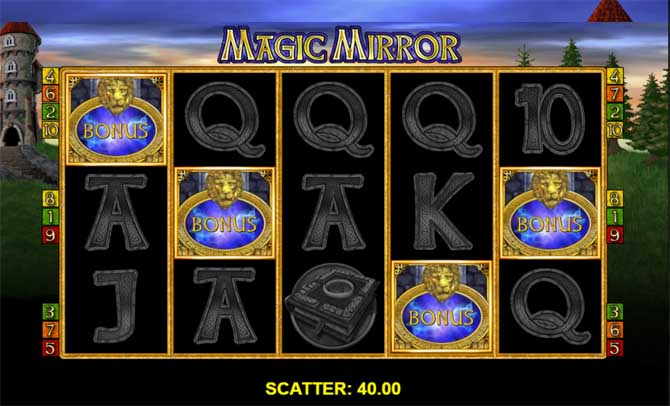 But as this slot’s Scatter symbol, it can trigger the single bonus feature. Keep an eye out for it, because three or more Scatters during a spin will trigger the freespins bonus round. As a result, you will receive a total of 10 freespins, but with a little extra something. One of the regular symbols will randomly be chosen to become a special symbol, and it will be in your best interest to land a winning combination with it. If you do, it will then expand to cover the rest of screen, which can make for very high payouts. 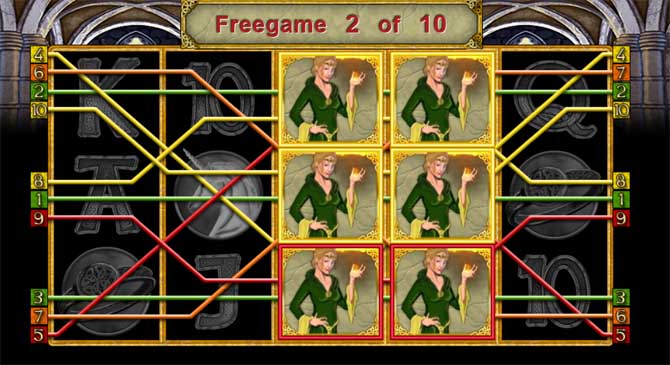 What’s more, you can also benefit from the Magic Mirror Gamble feature that this slot boasts. It will allow you the opportunity to increase your winnings in the base game, in case you aren’t satisfied with your payouts. Similarly to other games by this provider, you will have two Gamble options. You can either play the very familiar card game, where you will need to guess the color of the top card. Alternatively, you can play the ladder-climbing game, which, however, isn’t at all as easy, as you might think.

Magic Mirror doesn’t offer a whole bunch of diversity in terms of elaborate bonus features. But there are much cash prizes to be won here. But do be careful, as the high variance of this game can prove dangerous for your wallet.