Knight’s Life is a fun, enticing and potentially also a very rewarding slot game by provider Merkur. Medieval styled slot game fans will agree especially, but we’re sure that other players will find it just as amusing. For one, the theme features knights in shining armor, their faithful steeds and heavy swords. But there’s more – enchanted castles and powerful wizards are also present in this slot, which adds more excitement to gameplay. The symbols also picture the lower card icons, each in a different color and all decorated with characteristic ornaments to fit the theme. They include A, K, Q and J. Following them are knight accessories, such as the sword, helmet and shield. After them comes the castle symbol and the three character symbols of different knights. 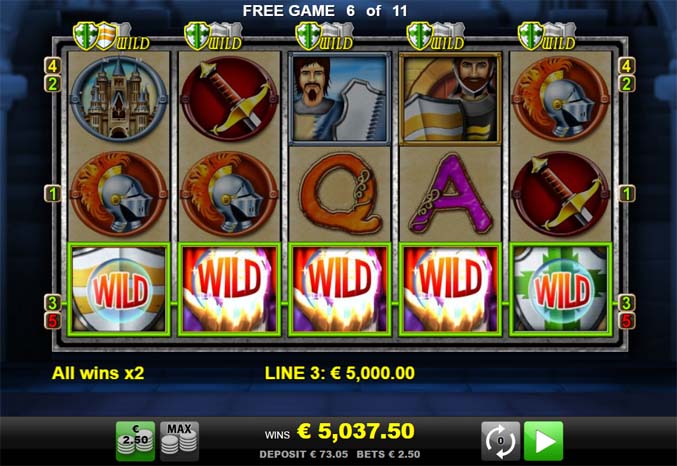 Knight’s Life has a rather familiar layout of 5 reels and 3 rows. Oddly enough, there are only 5 paylines in this slot game, those are, however, not subject to adjustment. The betting range isn’t too large either, however, it starts at a very comfortable 5p per spin and spans up to £10 per spin. The average RTP of this slot is 95.84%.

The powerful wizard we mentioned earlier is the game’s Wild symbol. You will recognize him by the purple robe, long white beard and the crystal ball he’s holding. The wizard Wild can appear in any position on the reels. It can also replace any of the regular symbols to help to generate a successful spin. The only symbol it cannot substitute for is, of course, the Scatter. But there’s one more thing. The Wild will also double the wins of any combination it becomes a part of.

Knight’s Life main attraction, though, is the freespins bonus feature. If you want to benefit from it, you will need to keep your eye open for the game’s Scatter symbol. It comes in the shape of a horse and can appear anywhere on the reels. If you land three Scatters during a spin, you will get 10 freespins. Likweise, 4 or 5 Scatters during the same spin will grant you 15 or 30 freespins, respectively. 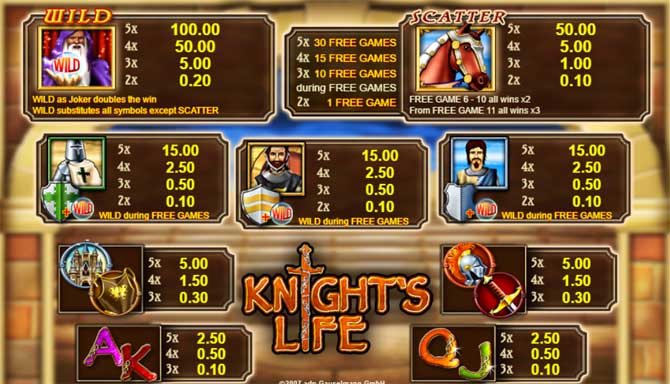 You will get to play the freespins on a separate set of reels, but even that’s not all. After your sixth freespin, you will benefit from a 2x multiplier. And after the 11th spin, it will increase to become a 3x multiplier. What’s more, all the character symbols will act as Wilds throughout the duration of the feature, which will greatly improve your winning chances. And you can also retrigger the feature, even with as little as only 2 Scatters. They will award you a single freespin, but more Scatters will, naturally, award more freespins.

Knight’s Life is perhaps one of the best slot games by this developer. Even though it doesn’t have fancy HD graphics, it still never fails to attract players to its reels. This slot machine is very popular amongst many veteran slot players due to it’s potential for very big wins, as you can see in the screenshot in this review. But play wisely, as Merkur slots are particularly well known for their high volatility.