Blood Suckers 2 is a video slot game and sequel to another iconic slot title by Netent. The original offering was a huge hit and is still very popular with players to this day. This new version offers improved, higher quality graphics, animated features and an engaging soundtrack. In addition, it also has an array of bonus features to offer, but we will get to those shortly. For the moment let’s have a closer look at the game’s appearance. In the backdrop you’ll see a very menacing depiction on the far wall of one of the blood suckers. And standing beside the reels is a female vampire hunter in a very extravagant outfit and holding a crossbow. You will see here beckon to you from time to time, inviting you to spin the reels. And another very neat feature is the drama that builds up when you have landed 2 Scatters, but there are still more reels spinning. That will really get you to sit on the edge of your chair. 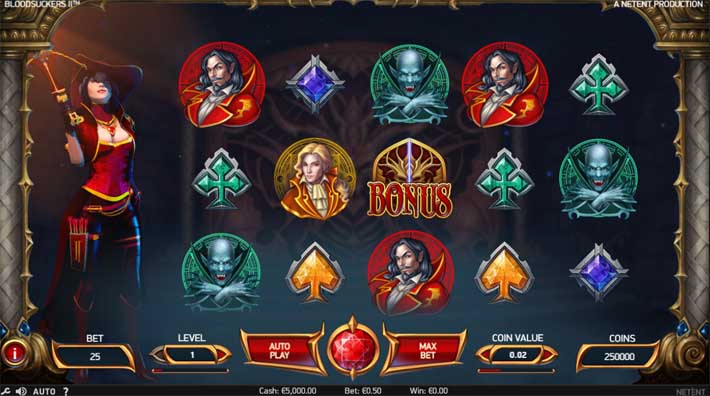 As for the icons in this game, we have the lower valuable icons first. Each of these comes in the shape of a gemstone in a metal frame. The symbols in question are those of the Diamonds, Clubs, Spades and Hearts. The gemstones also come in different colors, namely blue, green, yellow and red. Next up are the higher value character symbols – all different blood suckers. First is the female vampire with bat-like wings behind her. After that there’s a very gruesome green creature, baring its sharp teeth. Next is a fair-haired duke or prince, following whom is an older gentleman. This brings us to the layout in Blood Suckers 2, which features 5 reels and 3 rows. It also has a total of 25 available paylines, but these are fixed. There are two settings to help you regulate your betting amount, which can range from 25p per spin and up to a maximum of £250 per single spin. With this in mind, the RTP in Blood Suckers 2 is a fairly satisfying 96.94%.

The highest paying symbol on these reels is the game’s Wild, which can grant you up to a whopping 10,000 coins per single spin. The Wild can land everywhere and can stand in for all of the other symbols. And in doing so, it will help you create better and more winning combinations, so you can boost your winnings. However, the Wild will not be able to replace the game’s Scatter and Bonus symbols. 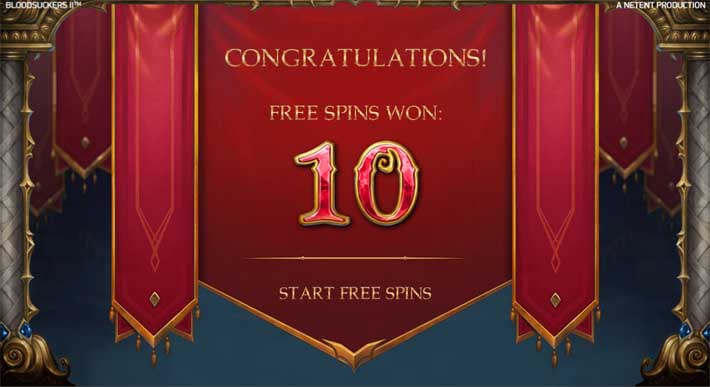 In turn, the Scatter is also quite lucrative, though nowhere near as much as the Wild. And it can also appear in any position on the five reels during gameplay. Better yet, landing as few as just 2 Scatters during the same spin will already award you a cash prize. But its main attraction is that it will be able to trigger the Blood Rose freespins bonus round. In order to activate the feature, you will be looking to land a minimum of 3 Scatter symbols anywhere on the reels. This will award you a total of 10 freespins with a 3x multiplier on all winnings. On top of that, you can also retrigger the feature and gain an additional 10 freespins. 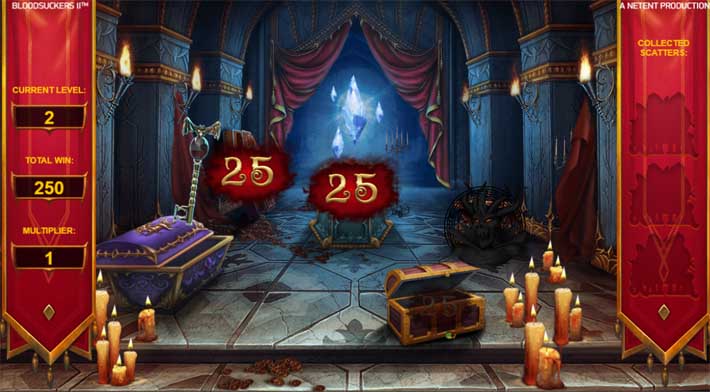 Another special feature in this offering is the Hidden Treasure Bonus game. To trigger it, you will need to look out for the 3 Bonus symbols landing all at the same time in the base game. The Bonus symbols need to land on consecutive reels, though, starting from the leftmost reel. As a result, you will enter a new chamber with a coffin and several chests. Take your pick to reveal cash prizes, Keys, Scatters or Demon symbols. If you triggered the bonus with 4 or 5 Bonus symbols, all cash prizes will be subject to a 2x or 3x multipliers, respectively.

In addition, there are also 2 random features that can take place at any point during gameplay. One of them is the Scatter Shot feature. It can award you an extra Scatter symbol, potentially triggering the freespins round. And in addition, all character symbols on the reels will offer a certain cash prize. Finally is the Bonus Shot feature. It in turn, can award you an extra Bonus symbol and thus help trigger the Hidden Treasure bonus feature.

If you are a fan of the original Blood Suckers online slot game, you will be sure to appreciate the sequel. It certainly offers better visuals and quite a bit more entertainment. Furthermore, the winning potential is also higher with a bunch of special features to go around. This is a medium volatile slot game, though, so don’t expect to trigger all the features right away. You can, however, count on some pretty satisfying rewards when you do. Blood Suckers 2 also have a fairly high RTP of 96.94%, so it should be a good choice for clearing bonus wagering requirements.

Blood Suckers 2 is not the best or most innovative slot NetEnt has produced, but it is another decent offering, with the high RTP and the good graphics being the best traits. Good for bonus wagering, but it could soon become pretty dull.