Not quite what you may be associating this title with, if you’re thinking about the popular comedy. Instead, this online slot game will provide you with more of a Parisian barber shop feel. Brought to us by software developer Thunderkick, Barber Shop Uncut boasts cartoonish visuals and an overall fun kind of vibe. Now, we know this provider to always deliver a very innovative and high quality take on gameplay. We’ll say that this particular title isn’t at all over-the-top in terms of appearance, perhaps more so with the setup. But it has a very pleasant, French-style soundtrack playing in the background and lighthearted graphics to go along with it. In addition, the reels spin at a very high speed, almost faster than you can blink, which implies that behind all the cute and smiling faces on the screen – this means business. 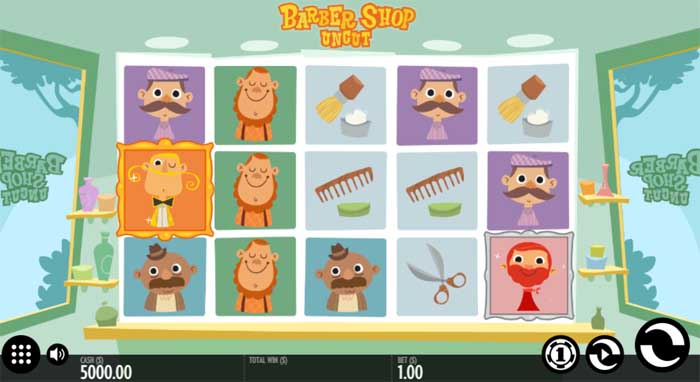 The symbols in this online slot game depict some of your most typical pieces of barber shop inventory. Starting with the lower value icons, we have a wooden comb and a small green can of styling gel. Following it is a symbol picturing a shaving brush and a scoop of shaving cream. Then there’s a pair of scissors, after which is the ultimate barber tool – a straight razor. This brings us over to the higher value symbols, namely the five characters – all happy beard and moustache wearers. First is an elderly gentleman, with no hair on his head, but a bushy moustache. Then there’s a ginger bearded man, following whom is yet another proud moustache wearer. Finally, we have a very full red beard and last but not least, we have the wearer of a long, thin, curly moustache. That latter one is also the highest value symbol on these reels. As for the layout, it’s fairly simple, featuring 5 reels and 3 rows. There are 40 paylines here, but they’re fixed, so you cannot regulate them. But the stakes are very liberal, nonetheless, ranging from 10p per spin up to £100 per single spin. And in addition to that, there’s also a refreshingly high theoretical RTP of 97%.

Barber Shop Uncut doesn’t have a traditional Wild symbol the way that most conventional slot games have. But it does have another special symbol and with it also a few special features. First in line is the Bonus symbol in the form of a barber’s pole. It can land in any position, on any of the five reels. This symbol will be able to trigger the game’s freespins bonus round. And in order for that to happen, you will need to land a minimum of 5 of these symbols simultaneously on the reels. It doesn’t matter if they land on active paylines or not. Once you’ve done this, you will receive a total of 10 freespsins. Furthermore, these freespins also come with a 3x multiplier! This means that all payouts will be subject to that multiplier for the duration of the feature. And you can also retrigger it by landing even just a single Bonus symbol at a time. For each extra Bonus symbol that you land you will receive an extra 2 freespins, whereas the maximum you can receive in total is 30 freespins.

In addition to the above, there’s also the Inwinity Spin feature, which you can trigger at the end of the freespins. Once you have played them all, the Inwinity Spin kicks in awarding you infinite freespins, until you land a winning one. But aside from this, there’s also the Respin feature to consider in this online slot game. This may not seem all that great when comparing to the freespins. But do watch out for it, because it can sort of provide you with a second chance at triggering at. 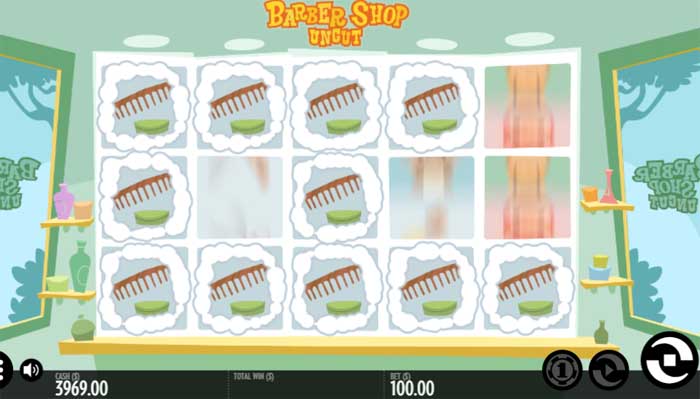 You can trigger this respin by landing a winning combination and/or by landing 3 or more Bonus symbols. As a result of this, the symbols that triggered the respin will remain in place, while all the others take a spin. That way, you can potentially increase your payouts from a winning combination by adding more symbols to it. Alternatively, you can get a chance to land extra Bonus symbols on the reels and potentially trigger the main feature – the freespins bonus round.

Barber Shop Uncut certainly offers plenty of action on its reels. Typically for this developer, there’s always something that’s slightly out of the ordinary. And we see that very clearly with the lack of a Wild, but plenty of other extras in place instead. All in all, it’s a fun theme with cute graphics and a charming atmosphere. And more importantly, there are plenty of more than decent winning opportunities. The game’s medium variance will ensure that you get a fair chance at the freespins round and also get to pocket some pretty satisfying prizes.