Software developer Thunderkick is yet again ready to surprise players with new and unique gaming possibilities. Thus, one of the most unusual and innovative titles by this developer is Fruit Warp. It’s a slot game alright, but not like anything you have ever played before. Before we get into the details of the setup, let’s first remark that this game boasts stunning graphics. The visuals, also typically for Thunderkick, are fantastic and extremely realistic. There isn’t much going on in the backdrop of this game, though. It’s just a pale green with some air bubbles here and there. There’s a rather laid back, tranquil soundtrack playing in the backdrop, too. And that makes for a nice kind of neutral atmosphere. 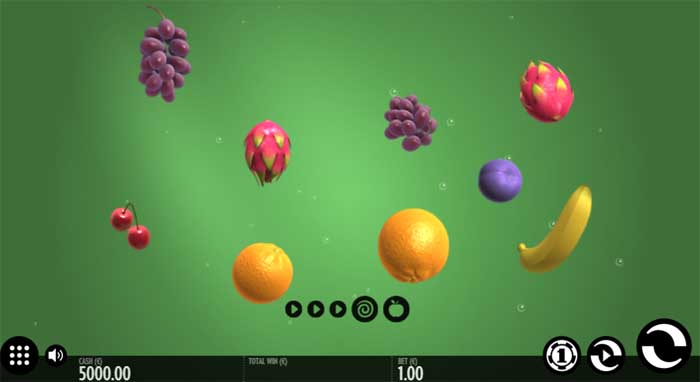 But the real charm in this game is its symbols. First of all, the icons in Fruit Warp are all, from start to finish, different pieces of fruit. And whoever knows their classic slots well enough can guess that the lowest value of them must be the cherries – and you’d be right. After that, we have the plum and strawberry symbols. And following them the value moves up to the mid-paying symbols, namely the oranges, bananas and grapes. Finally, the three higher value symbols in this title aren’t the kind of fruit you see in other games. They are starfruit (aka carambola), African cucumber (aka horned melon) and last but not least, pitaya or dragon fruit. That last one is in fact insanely lucrative, so keep that in mind during gameplay. This brings us to the point of interest: the layout. There are no reels, and there are also no paylines. As you spin… the symbols, they will simply be randomly thrown onto the screen. To form winning combos, however, you will be looking to land at least three of a kind on the screen. Stakes here are very liberal, ranging from 10p to £100 per spin. And there’s also a very satisfying RTP of 97%.

So, let’s emphasize this one last time to be clear. In order to get a win, you will need to land at least 3 of the same symbols anywhere on the screen during the same spin. It’s really even simpler than your regular slot game. With that said, we should point out that there are no other symbols besides the ones we already mentioned here. This in other words is to say that there will be no Wilds, no Scatters
(as essentially every symbol in this game acts like a Scatter) or Bonus symbols. So, that in turn translates to no substitutions and no traditional bonus rounds.

But that doesn’t at all mean you won’t get to enjoy some juicy extras in Fruit Warp. So, once you land 3 symbols of a kind, this will generate an instant win. But if you land 4 of a kind, you will get a portal respin. This means that the winning symbols will lock in place, whereas the others will respin. So, potentially you might gain additional symbols of that same type for a larger prize. 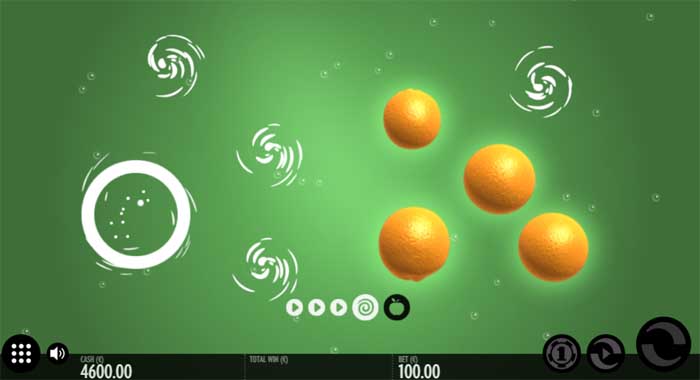 And finally, if you land 5 or more symbols of the same type, you will trigger the Fruit Mode. Once this happens, you will notice a Warp Meter appear at the bottom of the screen. From here on, you will receive an extra spin for every symbol of the winning type that you land on the screen. And while this happens, the Warp Meter will also show you the increasing multiplier. The multiplier increases with each win that you land and also depending on the number of symbols in that win. So, if you land 3 orange symbols, for example, the meter will move forward three steps. 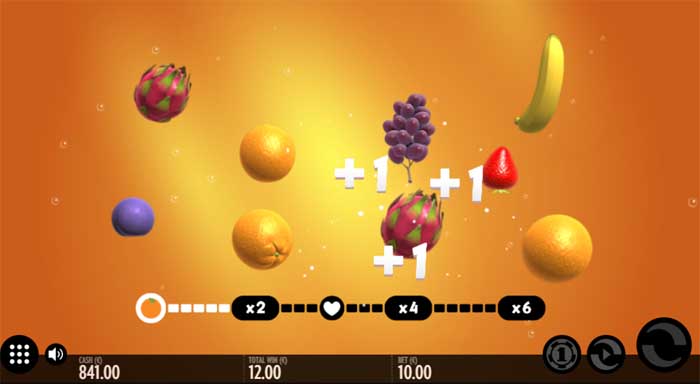 And as you move along the meter, you can also gain extra lives. These come in the shape of a heart symbol. Each extra life that you earn will award you a free respin, in case you don’t land any more of the winning type (the one that triggered the Fruit Mode to begin with). However, be aware that a respin with an extra life will not grant you any further movement along the Warp Meter. Once the feature comes to an end, the cumulative multiplier will be applied to the total amount by the end of the Fruit Mode. And this can be quite rewarding. 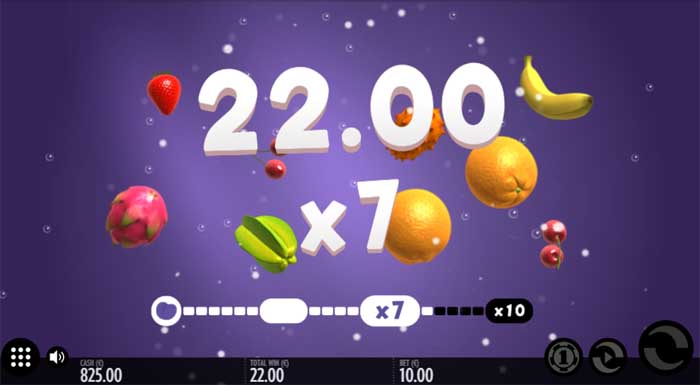 Fruit Warp is a very unique and entertaining online slot game. We love Thunderkick’s devotion to delivering things that aren’t like everything else and doing it with such high quality. The graphics, as we mentioned, are great. And as soon as you catch on to the way the Fruit Mode works, gameplay will become super engaging and fun. However, beware that this is an extremely volatile title, too. Most of the payout in Fruit Warp is designated to the bonus feature, so you won’t really see any big wins in the regular game play. The feature is super exciting though, especially with the higher value fruits like the pitayas, carambolas and kiwanos as a high multiplier win with these fruits can be really big.