Book of Ra Deluxe takes you on an epic journey alongside a very Indiana Jones-esque explorer, who is of course, searching for the book belonging to Ra. As such, the game from Novomatic provides players with some decent graphics and animations, offering up reels that are filled with Egyptian imagery of Pharaohs and scarab beetles, as well as appearances from the regular culprits in A, J, K, Q and 10 symbols. Unfortunately, the added soundtrack that is included in the game does little to stick to the theme, instead choosing to play out some wildly arcade sounding ditty every time you spin the reels. 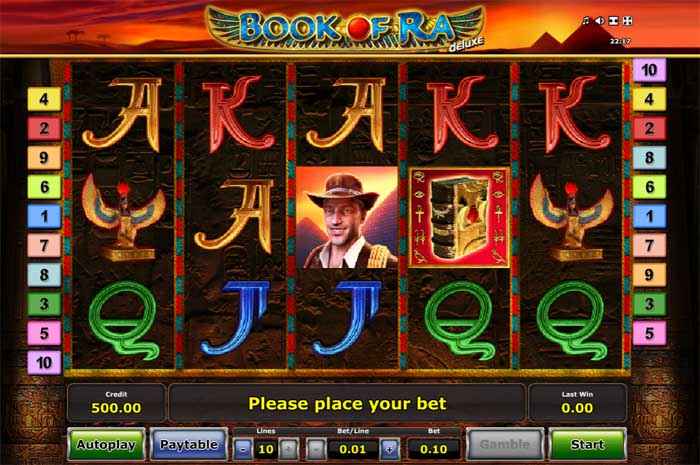 The product itself is a five reel and three row product, which also offers up a total of 10 separate paylines. These can be customised if you prefer to play with less active lines. The bet is fixed at a minimum of 10 coins, but this can be increased by utilising the bet per line buttons to change the maximum wager to €5 per line, therefore allowing a maximum wager of €50 coins per spin. The RTP in Book of Ra is typical for Novomatic slots, and set at 95.10% long term return to player.

The game has a wild and scatter symbol all incorporated into one. This is represented by the icon of the actual book belonging Ra. Should it appear anywhere on the reels, it will substitute for other icons in order to make a winning combination.

It comes into effect as a scatter icon when three or more of them appear on the reels. This not only provides a multiplier to your pay out, but will also give you 10 freespins at the same time. During this round, you’ll also be able to welcome a special expanding symbol, offering up extra chances to claim bigger wins.

Book of Ra is perhaps one of the most played games from Novomatic, and once you have tried it, you can easily understand why. It is without a doubt one of the best slots of all time and one of the best high variance slots online today.

Another thing to love about Book of Ra, and Novomatic slots in genera0l, is that while it can be very hard to trigger the bonus feature, it is much easier to re-trigger it. It is not unusual to get 3 or 4 re-triggers in a single feature on Book of Ra. The reason for this being that there are more scatter symbol present in the free spins bonus feature, than there are in regular game play. So when you finally get that elusive bonus feature, you are all set for a good time.