Ever felt like playing Indiana Jones and going on exciting adventures? Well, Novomatic’s Book of Ra slot game may just offer you that opportunity. This slot centers on the ancient Egyptian pyramids, with their silhouettes against the setting sun overlooking the reels. The reels are set in between two massive pillars and enclosed with a golden frame. As appealing as the graphics are, though, the soundtrack is as generic as can be, which doesn’t really help the overall gaming experience. Then again, is has become more of a Novomatic hallmark. The symbols here include the lower value playing card symbols A, K, Q, J and 10. Following them are a scarab beetle and a winged statue. Finally, there’s the sarcophagus of an Egyptian pharaoh and the depiction of an adventurer or archeologist. He is also the most lucrative of the lot, so be sure to keep an eye out for him.

The layout features the customary 5 reels and 3 rows, with a total odd number of 9 paylines. You are free to adjust the number of paylines to a lesser number, if you so choose. The controls in the game aren’t quite obvious, so you might need to fiddle a bit in the settings. But if you decide to play with the maximum number, you can enjoy a betting range of 9p per spin up to £90 per spin. The RTP you can count on is a meager 92%.

The Wild symbol here comes in the shape of an ancient book. It can appear anywhere on the reels and can replace any of the other symbols to help form winning combinations.

What’s more, the Wild symbol here is also the Scatter – two in one. And as such, it can trigger the single bonus game here. In order to activate it, you will be looking to land at least 3 Scatter Wilds anywhere on the reels during a spin. This will trigger the freespins bonus feature, granting you a total of 10 freespins.

This game also features a handy Gamble feature, which always makes for a great way to increase winnings and diversify gameplay. After each winning spin, you will have the option to either collect your win or gamble it. By opting for the latter, you will enter a side game, featuring a deck of cards. It will be up to you to guess the correct color of the top card: red or black. A correct guess will result in doubling your amounts, whereas you may have several consecutive attempts. Each next correct guess will double the amount of the previous attempt.

Watch out, though, because a single wrong guess will make you lose your wins and will end the side game. 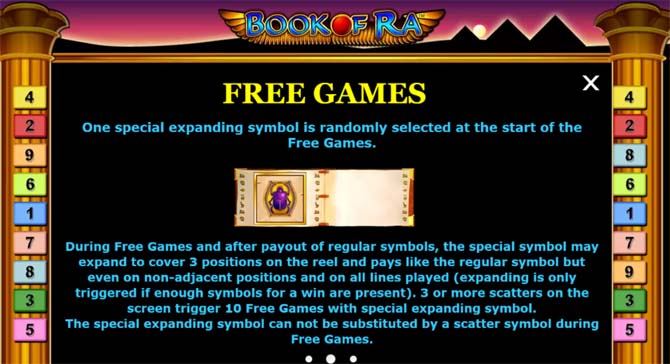 The original Book of Ra slot machine was a gigantic success for Novomatic back in the day. It offered up some really innovative features and was a favorite among many slot players, both in land based and online casinos. A lot has happened since it was released back in 2004, and by modern standards we have to say that it looks a bit dated to say the least. The RTP of 92% is also very low by modern standards, and we would advise you not to put to much money in to a machine with this low RTP.