Bruce Lee Dragon’s Tale is an online slot game by software developer WMS. Obviously, the slot centers on the legendary Bruce Lee and Chinese martial arts, so you can already get a whiff of what the overall vibe and theme will be like. First of all, we would like to point out that the graphics here aren’t all that great. They aren’t too flashy, don’t have that 3D or HD touch that most modern day slots chase after and frankly just appear dated. The color scheme of the backdrop is fairly typical of most Chinese and Asian themed slot games. Namely, it features plenty of gold and red with darker undertones. You will notice the traditional Chinese rooftop over the main set of reels. And speaking of which, one of the main attractions of this slot is that there are multiple sets of reels. 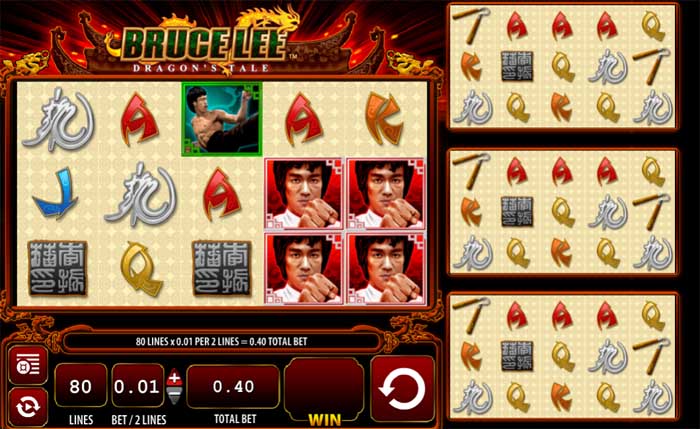 As for the symbols in this title, they include the lower value playing card icons. These are neatly styled to fit in with the theme and come in different bright colors. There are only four of them, however, and these are A, K, Q and J. This brings us to the higher value symbols, of which there are a bit more. First are the nunchakus, a silver hieroglyph and a slab with several hieroglyphics on it. Then there’s an increase in value for the temple symbol and an icon depicting Bruce Lee in action. And last but not least is a close-up of the famous actor, which is the most lucrative icon here. Now as for the layout, we did mention that there are several sets of reels – four, to be exact. Each of them features a grid of 5 reels and 3 rows, and there are 80 paylines in total across all sets. The paylines are fixed. And players can enjoy a betting range spanning from 80p per spin, which is kind of steep, up to £80 per spin. The RTP isn’t too overwhelming at about 95.9%.

This slot game also features a Bruce Lee logo symbol, which happens to also be the Wild. In addition, it’s also just as lucrative as the close-up of Bruce Lee. And on top of that, you can expect to see it in just about any positon, anywhere on the reels. So, as any Wild symbol should, it will be able to replace any of the other symbols to help create better winning combinations for higher prizes. Another very important feature that the Wild possesses is its ability to duplicate from the main set of reels to the other. So, wherever it lands on the main set, it will then transfer to those exact same positions on the other reels. However, the Wild will not be able to substitute for the game’s Scatter icon. 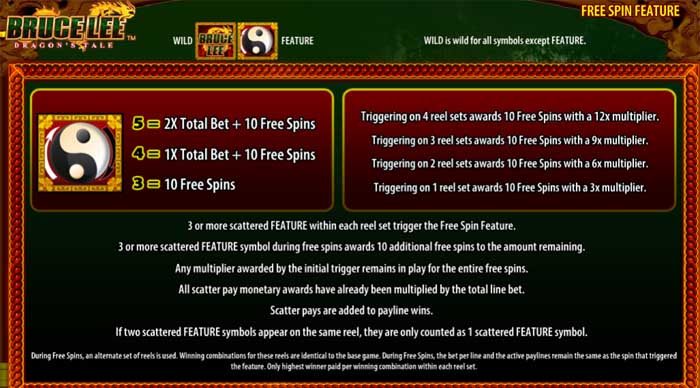 The Scatter, in turn, comes in the form of a Yin Yang symbol. And just like the Wild, it will be able to land anywhere on the screen. In addition to that, it too can duplicate onto the three remaining reel sets from the main one. And on top of that it also happens to be responsible for triggering this slot’s single bonus round – the freespins feature.

To trigger this feature, though, you will need to land a total of at least 3 Scatter symbols on every set of reels. This’ll award you a total of 10 freespins, but if you land more Scatters, you can count on better rewards. So, 4 Yin Yang symbols will award you a 10 freespins with a cash prize equal to your stake. And of you land all 5 Scatter symbols, then you can also count on 10 freespins and a cash prize that’s double your total bet.

But there’s more. Depending on the number of reel sets you land all these Scatters on, you can expect those rewards to become even more promising. So, if you only trigger the feature from one reel set – you get your 10 freespins with a 3x multiplier. If you do so from 2 reel sets, on the other hand, those freespins will come with a 6x multiplier. Then 3 reel sets will award you a 9x multiplier on your winnings from the same 10 freespins. And last but not least, triggering the bonus from all 4 reel sets will give you a 12x multiplier.

Bruce Lee Dragon’s Tale doesn’t quiet dazzle players visually, as one might hope for. There are no stunning graphics, entertaining animated sequences or anything to really call eye candy. However, this is an extremely volatile title with the potential for very high wins. Therefore, be sure to look out for your bankroll, because it can easily be eaten up in no time. But for those with enough patience, it will be well worth the wait.