Buffalo Blitz was created by the developers at Playtech and released in July 2016. It is set somewhere in the vast wilderness of North America and focuses mainly on its wildlife inhabitants. You will see animals like moose, raccoons, mountain lions and others. In the backdrop of the game you can clearly see the beautiful mountains, still with snow on the peaks. And a massive plane of green grasslands extends all the way from the foreground to the foot of those tall mountains. The colors of the sky would suggest that it’s taking place either at dawn or sunset, with the pinkish clouds near the horizon turning deep purple and blue on their way up. There’s an oddly dramatic orchestral soundtrack playing, which we think is a little bit much for this theme. But the controls are at your disposal to mute the sound if you would prefer. Another thing you will notice is that the graphics in this slot are a bit dated. 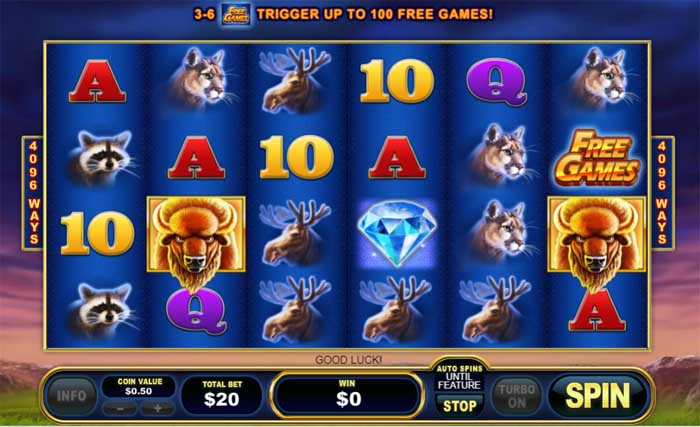 As for the symbols, we have the traditional playing cards you find in almost every slot, and as is custom – each in a different color. The symbols include A, K, Q, J, 10 and 9. This brings us over to the higher value symbols, of which there are five in total. And all of these represent a different animal, indigenous to North America. First are the grizzly bear and the moose. Following them, we have the raccoon and puma or mountain lion. And last but not least is the buffalo symbol – the most lucrative on these reels. Keep a special eye out for it, because it can appear stacked on all reels. The layout in Buffalo Blitz is slightly unusual, featuring 6 reels and 4 rows. And there are a staggering 4096 ways to win. But those are not subject to adjustment on the player’s part. As for the available betting amounts, you will be looking at a range of 40p per spin up to £200 per spin. The theoretical long term RTP in Buffalo Blitz is set at 95.96%.

The diamond symbol in this title acts as the Wild and it can appear on reels 2, 3, 4, 5 and 6 only. In addition, it won’t grace you with any prizes of its own. However, it will be able to replace any of the other symbols on the screen. And thus, the Wild can help create better winning combinations. The one symbol that it will not be able to replace, though, is the Freespins (Scatter) icon. And the Freespins symbol is really one you will want to look out for during gameplay. It will be able to trigger Buffalo Blitz’ single most attractive special feature – the freespins bonus round.

So, kind of like the Wild, you can expect to land the Scatter symbol in any position, anywhere on the 6 reels. And better yet, landing a minimum of only 3 symbols during a spin on this large grid will be enough to trigger the freespins. Of course, the more Scatters you happen to land – the higher the number of awarded freespins will be. 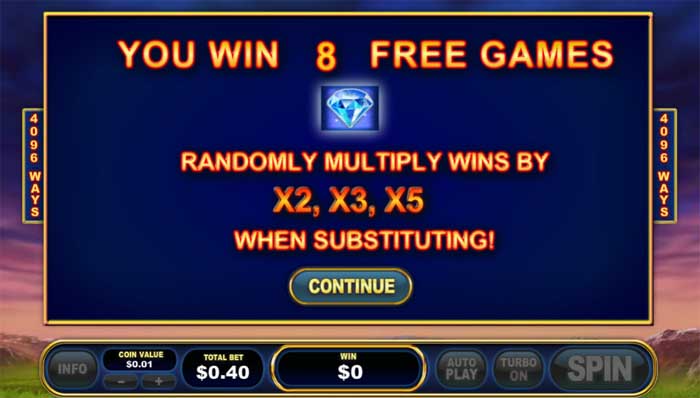 So, the minimum of 3 Scatters will also award you the smallest amount of only 8 freespins. 4 or 5 Scatter symbols will grant you a total of 15 and 25 freespins, respectively. But what you will really want to aim for is landing all 6 Scatter symbols at once. This will reward you with a massive 100 freespins in total! Furthermore, you can also retrigger the feature with even only just 2 Scatter symbols as a time. Landing 2 Scatters during the freespins bonus round will result in an additional 5 freespins. Again, the more Scatters you land – the higher that number will be. And from 3 Scatters on that number is the same as when triggering the feature from the base game. 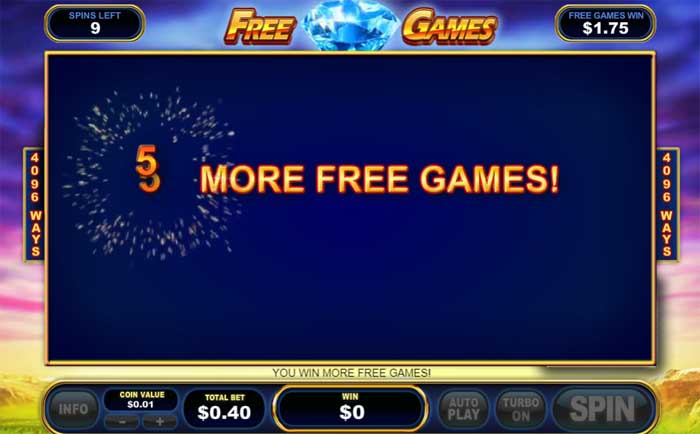 But that is not all yet. In addition to all of the above, the Wild also comes with a special little extra during the bonus round. Whenever it lands on the screen and becomes part of a winning combo, it will multiply the payouts of that combo by a random multiplier. The value of this random multiplier can be 2x, 3x or 5x. Thus, Wild wins during the freespins feature can prove to be exceptionally lucrative. 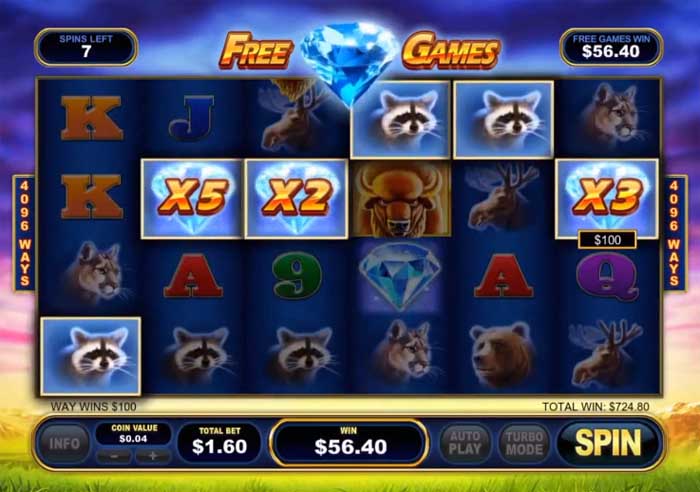 Buffalo Blitz is a pretty high variance title with its biggest rewards coming from the freespins round. Of course, triggering that bonus feature may take some time. So be sure to be able to stretch your bankroll if this is the kind of slot game you’re looking for. As far as the visuals and such go, we did point out that they’re a bit dated. However, that doesn’t really take much away from gameplay itself. It’s a pleasant overall setting and the structure of this slot is fairly simple, so it makes for a very decent gaming experience. If you like Raging Rhino from WMS, you will probably enjoy Buffalo as well, as they are quite similar in game play. All things put together, Buffalo Blitz is one of the best online slots out there.