Casino Zeppelin is an amazing online slot machine by game provider Yggdrasil Gaming. Traditionally, this developer always delivers the best quality graphics and Casino Zeppelin makes no exception in this sense. And you can also often trust Yggdrasil to often provide a new, innovative theme, which is also the case here. First off, this slot game features a steampunk theme. And the setting actually takes you to the inside of an airship. So you’re basically looking through the windshield onto the reels. And behind them, the backdrop features the evening sky, with the pink and orange colors of the setting sun. And beyond that you will see the holographic shape of the airship. We would also like to point out the very compelling soundtrack playing in the background. It really helps conjure up that air of romanticism and adventure that is usually associated with steampunk. 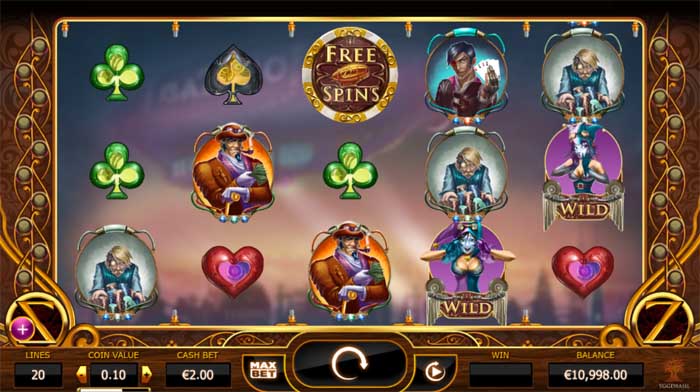 Besides the unusual setting, Casino Zeppelin has a number of strange characters on the reels. But before we introduce them, let’s first have a look at the lower value symbols. These are the playing card suits, and there are four of these. Each comes in a very unique form that does the theme justice. And the icons in question are Clubs, Diamonds, Hearts and Spades. Following them, we have the higher value character symbols, of which there are also four. And they all appear to have something to do with gambling, hence the title. The first is hunched over a very large amount of casino chips, whereas the next is holding a hand of four Aces. The third character is shown very confidently rolling a pair of dice. And last but not least, the highest paying symbol is of a classily dressed man holding a stack of money. As for the game’s layout, it’s pretty conventional for a change, featuring 5 reels and 3 rows. In addition to that, there are 20 paylines in total. These are fixed, however, so you can’t adjust them. The betting range reflects as much, but doesn’t give too much room for high rollers. Stakes span from 20p per spin up to £10 per single spin. And the RTP on this slot is a solid 96%.

Casino Zeppelin features not one, but five different Wild symbols on its reels. And their appearance depends on the reel they land on. So each reel has its own Wild symbol. The thing they all have in common is that they each depict a female character, with Joker-like characteristics in their appearance. However, despite looking different from one another, their main purpose is still very much the same. They will also be able to replace any of the regular symbols on the reels in the name of creating better winning combinations. They don’t offer any payouts of their own, though. And in addition, they can’t substitute for the game’s Scatter symbol.

Landing two or more Scatters in any position on the reels will award you an instant win of 40 coins. However, your real aim will be to land at least 3 Scatters during the same spin. The Scatters can land in any positon, anywhere on the five reels. And on top of that, they will also be able to activate this title’s most attractive feature – the freespins bonus round. 3 Scatters will also give you 10 freespins on top of the cash prize. And 4 Scatter symbols will award you a total of 15 freespins. Last but not leasing, landing all 5 Scatter symbols will grant you a total of 20 freespins. 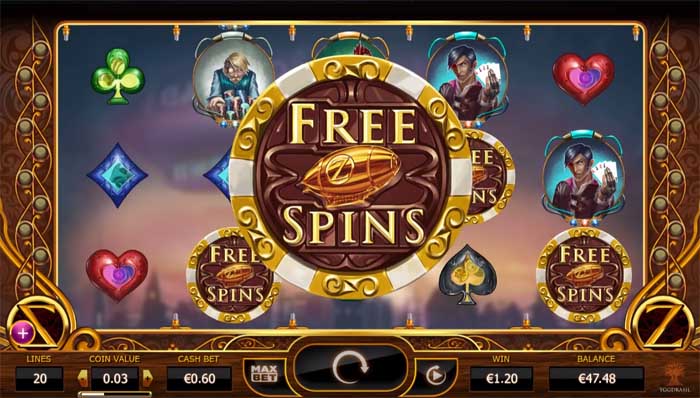 Now, if during the spin that triggered the bonus round you happen to have also landed one or more Wild symbols, those will remain sticky for the duration of the feature. Furthermore, any Wilds that you land during the freespins will also turn into Sticky Wilds. But the Wilds here will also have another valuable quality, as well.

If you manage to collect one of each type, in other words one on each reel, this will retrigger the feature. As a result, you will receive another 5 freespins in addition to what you have left. However, you can only do this once throughout the duration of the bonus round.

What you really wan’t is of course to get that ellusive wild line that everyone is talking about. If you manage to get a wild line, you are guaranteed a big win on every spin. It is not unusual for your total win to be well over 1000x if you hit the wild line in Cazino Zeppelin, depending on how many spins you have left when you hit it. 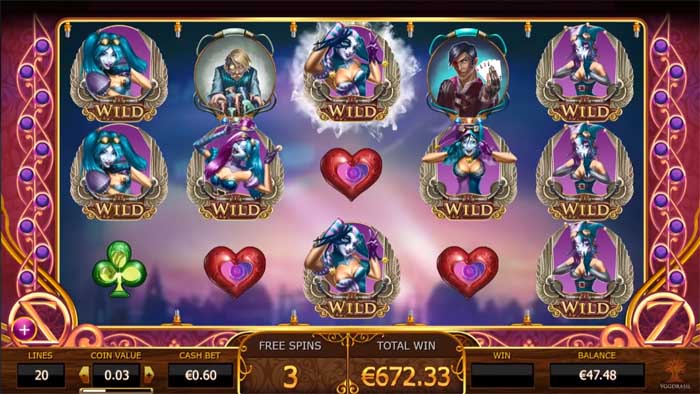 Despite the stakes not reaching for the skies, Casino Zeppelin is nevertheless still a title that caters to high rollers anyway. This is a very volatile online slot game with the potential for wins of up to 2,000 times your total stake per spin. And where there’s a high variance, there are also prolonged periods of losing spins. So be sure to brace yourself and pace your bankroll accordingly. Triggering the freespins bonus round will prove to be the most difficult. But that’s also the most rewarding part of the whole slot. Thanks to those sticky Wilds, this feature can prove to be very lucrative indeed. If you like other slots with sticky wilds, such as Dead or Alive from NetEnt, we are certain that you will like this one as well, as they have a lot in common.