Valley of the Gods Slot

Valley of the Gods slot review

Valley of the Gods is an epic online slot game by software developer Yggdrasil. Be sure to watch the intro of the game to get a feel of what we mean by that. Typically, Yggdrasil is known for the high quality graphics and generally just very entertaining visuals of their games. And Valley of the Gods fits those descriptions perfectly. The theme is ancient Egypt, which is nothing new in this industry. But the layout, the setup and nearly everything about this slot is unique and different from what most games have to offer. In the backdrop you have the gateway to an ancient tomb, with two Egyptian god statues guarding it on either side. One of them is Anubis – the god of mummification and the afterlife; the other is Horus – god of the sky. Both look rather menacing with glowing eyes. And there’s a matching mysterious soundtrack to accompany gameplay, too. 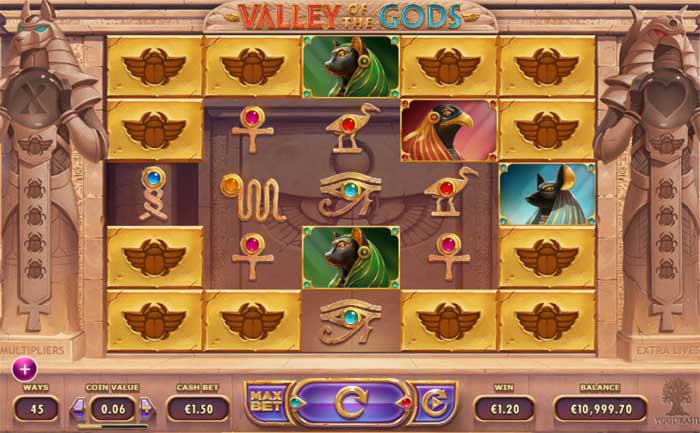 The symbols here include the lower value hieroglyphics with gemstones in them. First is what resembles a spiral with a blue gem and an ankh with a purple stone. Then there’s a slight increase in value for the cat figure, which has a green gemstone, and the snake symbol with a yellow one. Then finally we have the Eye of Horus symbol, with a bright blue stone and the bird – with a fiery red gem. This brings us to the four higher value symbols, three of which are deities. There’s Bastet, the cat goddess and Tutankhamun – one of the most prominent Egyptian rulers. And last but not least there’s the familiar Anubis and Horus. As for the layout in this slot, you will notice it’s rather unusual. There are 5 reels and 5 rows, with 45 up to a whopping 3,125 ways to win. And as for the betting range, it’s pretty flexible. Stakes here span from a minimum of 10p per spin up to the maximum of £100 per single spin. The slot RTP here is also pretty decent at about 96.2%.

Valley of the Gods special features

The structure in Valley of the Gods, as you may have already come to realize, is unusual. The first unusual part is that there is no Wild symbol in this slot game. So no symbol replacements or anything like that. Instead, a very important part in the game’s setup is played by the two pillars standing on either side of the reels. But we will get to them in just a little bit.

First, let’s cover the respins feature. Triggering it doesn’t require anything special – just land a winning combination and you will activate a respin immediately. But in addition to the respin, you will also unlock more ways to win. And if as a result you land at least another winning combination, you will trigger a consecutive respin. This will keep going for as long as you keep landing winning combos. 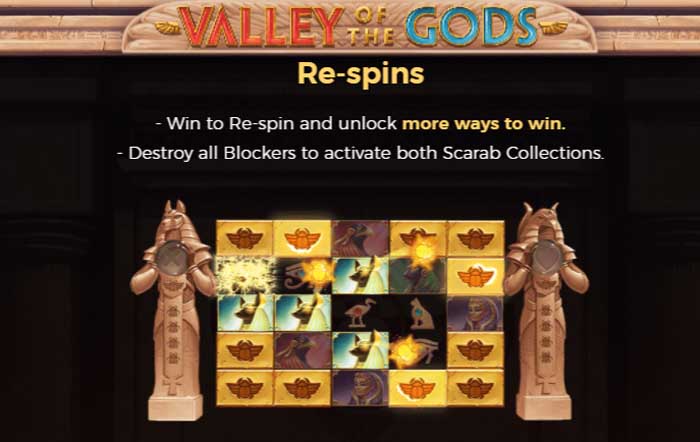 One more thing that will occur during the respins: all winning symbols will turn into golden scarab beetles. These golden scarabs will then fly off and destroy the blockers, which is what will increase the number of paylines. Once you have destroyed all the blockers on the screen, any remaining scarab beetles will turn into either red or blue scarabs. And that’s where the two statues come into play.

By collecting red scarab beetles, you will fill the pillar that Horus holds (to the right) and for every 5 scarab beetles you will receive an extra life. We should point out that the act of destroying all the remaining blockers will already reward you with 1 extra life to begin with. And from then on, each extra life that you collect will award you a respin, even in those instances where you’ve landed a losing spin. Then there’s the blue scarab beetles, which will go towards the pillar held by Anubis – to the left. Filling up the pillar with 5 blue scarab beetles will award you a +1x multiplier. Initially, the multiplier will be x2 once you destroy all the blockers on the screen. And the multiplier value will apply to all respins that follow.

So ideally, you will need extra lives to keep those respins happening. And in addition to that you will also want to keep on collecting blue scarabs to increase your multiplier and therefore – you prizes. 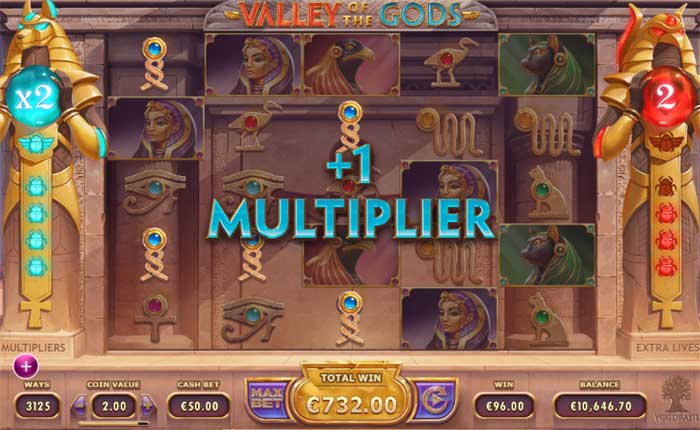 Valley of the Gods is certainly a very entertaining title with a different gaming experience. You don’t have the conventional bonus features that most other slots offer, such as freespins, pick me games and cash trails. Instead, the respins feature is the main attraction. And the layers of extra lives and multipliers make it all the more exciting and lucrative. All in all, this is a medium variance game. So you can expect there to be a very decent balance of winning and losing streaks with fairly satisfying rewards.