Dead or Alive is a slot game by software developer Netent and is also by far one of the most popular games in online casinos. It’s been around for quite a while now, but players still never tire from it. And that’s very well understandable, too. For one, the graphics are amazing. Featuring a theme of the Wild West with explicit details, this game provides a very sophisticated atmosphere and authentic feel. And for another, this game is notorious for its monster wins. Players just keep on a posting screenshots of enormous payouts on various gambling forums and that is part of what allows this game to maintain its appeal for so long. 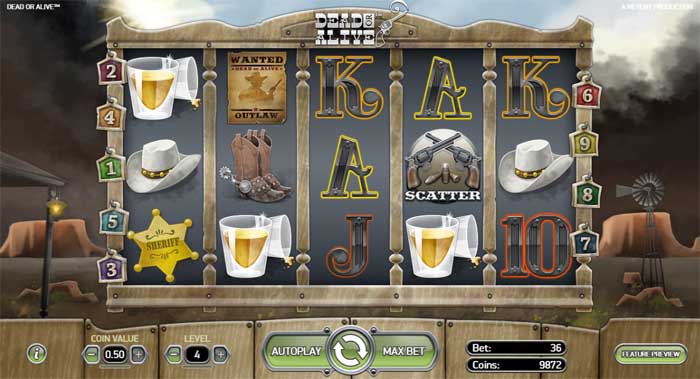 In addition to the pleasing visuals, Dead or Alive also has a matching soundtrack, reminiscent of that in some of the most famous westerns. The reels showcase the uniquely styled lower value playing card symbols: A, K, Q, J and 10. Following them are several typical cowboy attributes, which we all associate with life in the New World back in the day. First are two shot glasses – can’t be a proper cowboy if you don’t have a few drinks. In addition to them, there’s a pair of cowboy boots, complete with sharp spurs. Following the boots is a white cowboy hat and a gun belt, with bullets and a revolver. Concluding the list of regular symbols is the sheriff’s badge.

The slot features a very familiar layout of 5 reels and 3 rows. Players have a whole lot of freedom to adjust the different settings here, including the number of paylines. Their maximum number is 9 and the stakes can range anywhere from 9p to £18 per spin. In addition, the RTP is a satisfactory 96.8%.

What Wild West themed slot doesn’t have a ‘Wanted’ poster? Not this one. In fact, it also happens to be the game’s Wild symbol and it can appear anywhere on the reels. As it should, it can also replace any of the regular symbols to help create winning combinations and secure payouts. However, as is custom, the Wild cannot substitute for the Scatter symbol, which this slot also has. It depicts two crossed revolvers and a few bullets and can also appear in any position on the reels.

The Scatter symbol is also responsible for triggering this game’s freespins feature. This is the most lucrative and attractive feature, so you will really want to keep your eyes open for it. You will need to land at least 3 or more Scatter symbols in order to activate it. Regardless of the exact number of Scatters, you will receive 12 freespins with a 2x multiplier on all freespins wins. The number of Scatters will, however, affect the amount of the cash prize you will receive before the freespins start. It can be anywhere from 4 times your stake amount up to an unbelievable 2,500x your stake! 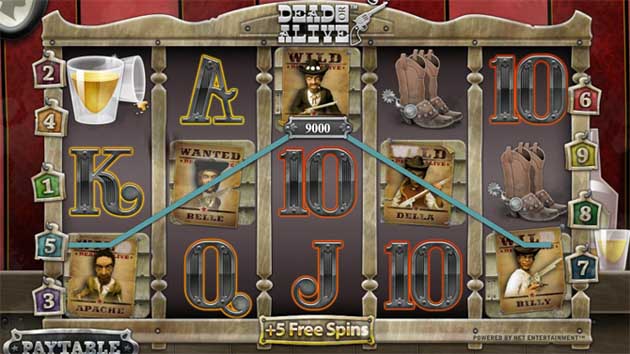 Sticky wilds for the chance of really big wins

The freespins bonus round also comes with a Sticky Wilds feature, which makes it all the more worthwhile. If the Sticky Wilds appear on the reels, they will remain in place throughout the duration of the feature, increasing your chances for higher payouts. What’s more, though, you have the chance of gaining more freespins during the feature. One or more Sticky Wilds that appear on all reels will award you an extra 5 freespins on top of the ones you already have. Thus, players can count on a potential maximum of 17 freespins in total.

The possible maximum win you can count on in this game is crazy high. In order to score a big win on this game, you will be looking to land a bunch of Sticky Wilds during the freespins feature – at least one on each reel to be exact to get the five extra spins, and preferably five on a payline for the wildline. However, do keep in mind that doing to isn’t all that easy. It might take you a while before you collect all the necessary Wilds during the feature. But when you do, you can be certain that this will almost always result in high payouts.

Dead or Alive is a slot game that offers fantastic winning opportunities like few others. That is mainly why it has become so legendary, especially among seasoned slot players. You can often come across screenshots, as we pointed out earlier, of players, who landed fantastic payouts upwards of 5,000+ times their stake. That’s huge! But as this game is in the very high variance range, it requires a decent amount of respect and apprehension.

What you really want to achieve in this slot game is to hit that elusive wild line. Five wilds beautifully lined on a pay line are guaranteed to give you a monster win. And the sooner you get the wild line in the free spins feature, the more spins you will get with the wilds locked in place thanks to the sticky wilds. If you go hunting for that wild line however, keep in mind that you can go thousands and thousands of spins before you hit it, so be sure to adapt your bet size so you don’t go bust early on.

Dead or alive is a legendary slot machine from NetEnt, and probably one of the slots who has produced the most wins over 1000x in the history of online slots. It deserves a place in the hall of fame of slots just for that.