Columbus Deluxe takes players to the Age of Exploration, distant expeditions and treasure hunting. Centering on arguably the most famous figure of that era, this game is all about ships and navigating the vast seas. The backdrop pictures old maps with numerous courses drawn on them. As for the soundtrack, it’s juts your regular Novomatic sound, nothing special or overly thematic. The symbols here feature the lower value playing card symbols A, K, Q, J and 10. In addition to them there’s an old sextant, a golden necklace, following which is Queen Isabella and finally – Christopher Columbus himself. He is also the highest value symbol on these reels. Graphic-wise, this isn’t the most sophisticated slot game.

The layout features the customary 5 reels by 3 rows. You will notice that the maximum number of paylines available here is 10. You are, however, free to use less than that if you so choose. Betting amounts range from as little as 20p per spin and soar up to a maximum of £100 per spin. Players should know that the RTP is set at 95.02%, pretty standard for Novomatic slots.

Columbus is the Wild symbol in this game and he can appear in any position on the reels. And as any Wild should, he can replace any of the regular symbols to help create winning sequences. However, he cannot substitute for the Scatter symbols.

That is correct, there are multiple Scatters here, that wasn’t a typo. In fact, there are exactly 3 Scatter symbols. Each of them represents one of Columbus’ ships, and each can only appear on a single designated reel. Thus, you can essentially land Scatter symbols only on reels 1, 3 and 5. You will be looking to land all three of them, in order to trigger the freespins bonus feature. 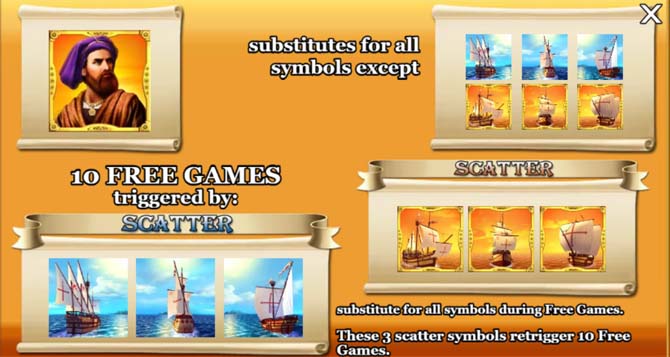 And when you do, you will receive 10 freespins. During these freespins, the Scatter symbols will also start acting as extra Wilds, which will increase your chances of winning bigger. What’s more, you can again land 3 of them simultaneously to retrigger the feature. This will award you an additional 10 freespins, and you can keep on retriggering the feature after that, too.

In addition, this game also benefits from a Gamble feature, which will allow you the opportunity to increase your wins during the base game. It will offer you to gamble your prize after a winning spin and potentially double it – up to several times. The side game comprises of a simple 50/50 chance game, where you will need to guess the correct color of a playing card. If you guess wrong, you will end the feature and forfeit your prize. Guessing correctly, on the other hand, will double your amount.

Columbus Deluxe is a low to medium variance slot game, so don’t expect massive payouts. But if you’re looking for a long and steady gaming experience, this could be your slot.