Crystal Waters is a slot machine brought to you by RTG. If you’re feeling like extending the last summer days and reminiscing about that awesome holiday at the beach, this is the game for you. Turquoise waters, clear blue skies and fluffy white clouds, reflecting the whiteness of the sails below them – this title has it all. And below the surface of that turquoise water in the backdrop you can see the rich underwater life. There are corals of every shape and size and in every color of the rainbow. And above all that, on either side of the reels, you have pristine beaches with tall palm trees and golden sands. It’s a genuine summer paradise. But do keep in mind that the game isn’t exactly new, and you can tell as much from the graphics. There’s also no soundtrack that would accompany gameplay. 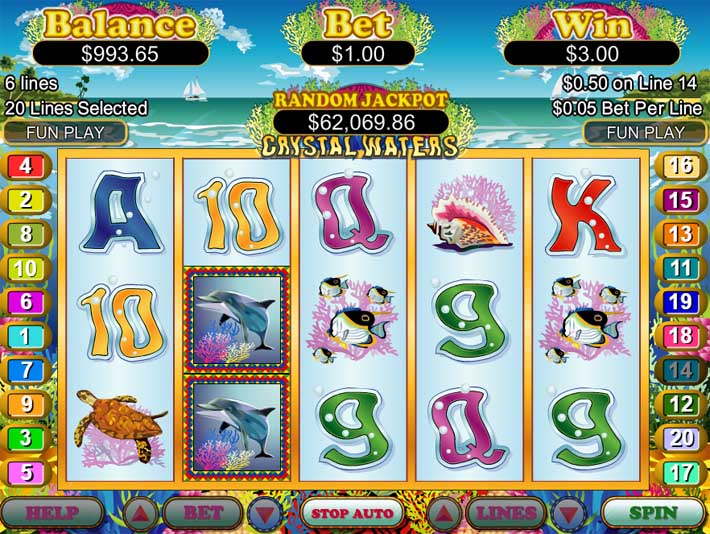 As for the symbols here, we have the lower valuable card symbols. These are in a squiggly kind of font, mimicking their distortion from above the water’s surface. And the icons in question are A, K, Q, J, 10 and 9. After them we have some sea creatures as the higher value symbols. These, in turn, start with a sea horse and a rather large seashell symbols. After that, there’s a bump in value for the symbol depicting a school of fish. And last but not least, there is a sea turtle as the highest paying icon on these reels. With its help you can gain up to 2,000 coins. This brings us over to the game’s layout, which features 5 reels and 3 rows. There are 20 paylines in total, but typically for RTG, you can regulate these as per your preferences. And this also makes for a rather flexible betting range. Wager amounts in this offering range from a minimum of just 20c per spin up to $100 per single spin.

For starters, the first special symbol in Crystal Waters is a dolphin and it acts as the game’s Wild. This is a fairly elusive symbol, because it will only be able to land on reels 2 and 4. And it doesn’t offer any real payouts either. Instead, however, it will be able to replace the other symbols on the reels. Thus, it can help create more winning combinations and potentially also better your winnings. Aiding that statement is the fact that the Wild will not only substitute for other symbols, but it will also double the payouts of any winning combinations it helps complete.

However, the Wild will not be able to substitute for the game’s Scatter, so be sure to keep this in mind. As for the Scatter itself, it comes in the form of a yacht. And unlike its Wild counterpart, it will be able to appear on any of the five reels during gameplay. It’s not particularly lucrative, though. But in order for you to benefit the most out of it, you will be looking to land at least 3 Scatter symbols all at the same time. This will trigger the freespins game and this title’s main attraction. 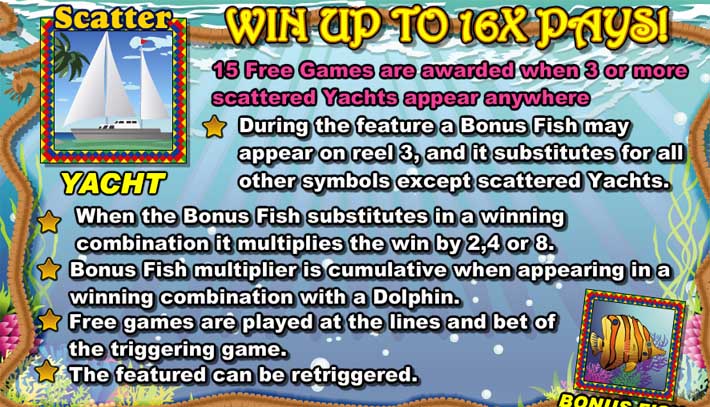 As a result, you will receive a total of 15 freespins. Players will also enjoy a 3x multiplier on all freespins winnings! But there’s even more where that came from. Keep your eyes open for a new symbol that is only present during the bonus round – the Bonus Fish symbol. It can only appear on the middle reel 3 and it will also take on the role of the Wild. So, it will also be able to replace the other symbols, except only for the Scatter.

Furthermore, whenever the Bonus Fish contributes to a winning combo, it can give you a multiplier of 2x, 4x or 8x. And if it’s in the same winning combination with the Dolphin Wild, then their two multipliers will add up. What’s more, you can even retrigger this feature and gain a total of 30 freespins. To do this, you will need to land another 3 or more Scatters at the same time on the reels. And another thing we should mention is the Progressive Jackpot that you can win randomly at any point during gameplay.

As far as the variance of Crystal Waters goes, we would put it in the medium range. This means you will get plenty of wins coming in all throughout the gameplay. However, they will be considerably smaller in size. Bigger wins will be sure to come from the freespins feature, though, that much is certain. And you will also get a healthy chance of triggering it at frequent intervals. It’s also a very simplistic offering from RTG with no complications or distractions. And the jackpot is of course also an attraction of its own.