Head back in time to the distant, feudal Japan, back to the era of the samurai with RTG’s online slot game Ronin. As you may well know, a ronin was a samurai, who had for one reason or another lost his master. The term itself means drifter or wanderer, and that is pretty much what ronin did back in those days – roaming the Earth without a purpose and with no one to serve. Be that as it may, let’s have a closer look at what this title has to offer. First of all, you will be sure to notice the graphics are a bit older. They don’t have the fancy animated features, 3D or HD quality to them or anything like that. But they are nonetheless fairly decent and do the theme justice. The backdrop shows us a beautiful landscape, with a tall mountain towering above the reels. You can make out a palace in the right side of the reels, and blossoming sakura are visible in the remaining three corners. 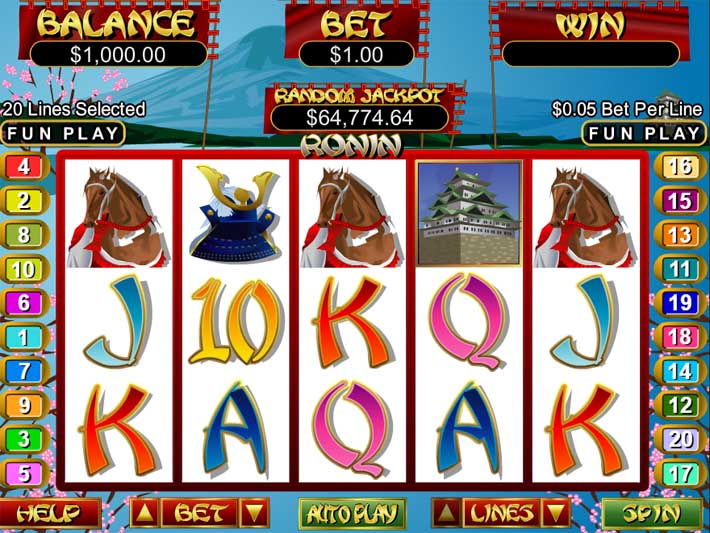 As for the symbols here, they feature the lower value playing card icons. These come in their typical bright colors and have an appropriate font for this theme. The symbols themselves are A, K, Q, J, 10 and 9. However, the more interesting icons are of course the thematic higher value symbols. These, in turn, start off with a dark blue banner with Japanese inscriptions on it. Next up is a traditional samurai helmet, or Kabuto – as the Japanese call it. Then we have the symbol of a horse, following which is that very same palace you can see in the backdrop. And last but not least is the Ronin symbol, offering the highest wins. The layout in this title features 5 reels and 3 rows, with a total of 20 paylines. However, the paylines are not fixed and you can adjust them as you please. This will also affect the betting amounts accordingly, whereas the minimum stake on these reels is only 20c per spin. The maximum amount available to bet per single spin here will set you back a total of $100.

Look out for the Koku symbol, which can only land on the middle reel 3. It acts as the game’s Wild symbol. And as such, it will be able to replace any of the ordinary symbols on these reels. And in doing so, it will also ensure that you have better winning opportunities and can score higher rewards. But just to reinsure that statement, the Wild will also double winnings for a winning combination that it helps complete. However, keep in mind that the Wild does not have the capability to replace the game’s Scatter symbol.

The Ronin icon we mentioned earlier can also act as a Scatter. Furthermore, it can even possess the qualities of a Wild symbol and replace the other icons when forming winning sequences. Thus, it too can be of great help when forming winning combos. But it won’t be able to replace the Koku Wild. In addition, Ronin Scatters and Wilds can land in any position, anywhere on the five reels at any point during gameplay.

However, the real magic begins when you land both Ronin and Koku symbols on the screen at the same time. In fact, if you land the Koku icon on reel 3 and at least 2 Ronin symbols anywhere else on the reels, you will trigger one of three different special features. One is the respin feature, where reel 3 will be covered with Koku symbols and will remain in place. The other reels will respin anywhere from 3 to 10 times. And any two or more Ronin will award you an additional 3 to 10 respins.

The other two features both involve freespins, where the first one will give you a total of 5 freespins. They will also come with an initial multiplier of 1x, which will increase by 1 for every consecutive freespin. And you can even retrigger the feature once, after which the multiplier will continue to grow. Last but not least, you can also receive 25 freespins with a 3x multiplier! This feature you can also retrigger and receive another 25 freespins on top.

Ronin may seem like a very basic online slot game at first, but that’s only until you have triggered the special features. Especially the freespins rounds can prove to be delightfully lucrative. Besides that, like with many titles by RTG, this one also has a Progressive Jackpot to offer. You can trigger it at any point during gameplay, completely randomly during any spin. As for the game’s visuals and overall appearance, of course it’s not the latest thing on the market. But it still manages to conjure up a nice vibe.