Software developer RTG has proven to have a bit of a thing for prehistoric themed slot games. So online slot game T-Rex isn’t the only one of its kind by this developer, nor is it the best looking one either. However, it still boasts some pretty terrifying animated sequences during gameplay and cool dinosaurs on the reels. This is despite the fact that T-Rex isn’t the newest offering and the graphics are still visibly quite dated. The backdrop in this title shows us a steaming volcano, far, far away in the distance. And surrounding the reels is the rich tropical vegetation of the Jurassic Period. You can even see clouds of mist hiding some of the dense forests. This game does not have a soundtrack, though, like many other older RTG slots. However, we should warn you that there can occasionally be some pretty startling sound effects from time to time. 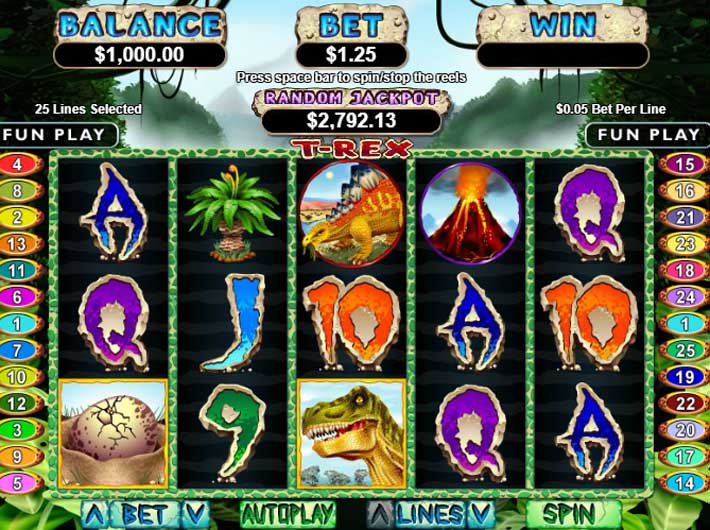 As for the symbols, they take off with the lower value playing card icons. These look fairy prehistoric, as though they were butchered out of stone by cavemen. But we know cavemen don’t remotely belong in the same era as the giant lizards on these reels. Anyway, the brightly colored slabs feature the symbols A, K, Q, J, 10 and 9. Next up are the higher value icons, starting off with an erupting volcano. After that we have a very unusual plant that looks more like a palm tree. Then we have the plant eating dinosaurs, the first of which is the Talarurus. Following it with an increase in value is the Triceratops. And last but not least, we have the Stegosaurus symbol. This brings us over to the game’s layout, which is pretty conventional. It features the common grid of 5 reels and 3 rows. In addition, there are 25 paylines in total, but typically for an RTG slot, these are adjustable. With that in mind, stakes are also relatively flexible, though they don’t exactly soar for the skies. The lowest bet you can make on these reels is 25c per single spin. And the largest possible bet you can make will set you back $6.25 per spin.

As the title of this online slot game may have hinted by now, the Wild symbol in this game comes in the form of a T-Rex. Possibly one of the most popular dinosaurs, the T-Rex Wild will let out a mighty roar every time it’s part of a winning combination. And speaking of that, the Wild will be able to help you out with winning combinations just perfectly. It can substitute for any of the other symbols and complete those sequences for them. On top of that, the Wild also doubles the payouts for those winning combinations, which is even better. On its own, though, it also happens to be the most lucrative symbol on these reels. However, it can only land on reel 3 in the base game and there is one exception as to the icons that the Wild can replace in this game. And it is the game’s Scatter symbol. 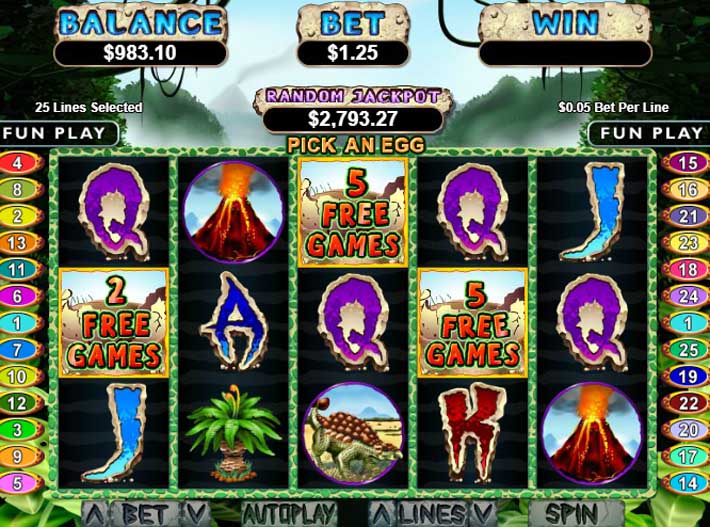 The Scatter comes in the shape of an egg that is about to hatch. And unlike the Wild, it will be able to land in any position, anywhere on the reels. By landing three or more Scatters anywhere on the screen during the same spin, you will trigger the freespins bonus round. But before the freespins begin, you will first have to go through a pick me game. Select the eggs on the screen to reveal your number of freespins, where each egg can award you up to 10 freespins in total.

After this, you will get to play the freespins on a separate set of reels. And keep an eye out for the T-Rex symbol landing on reel 3. When it does, it will eat any of the other dinosaurs present on the reels during that spin and take their place. It’s a very entertaining display, too. Thus, the Wild can help create even more winning opportunities throughout the special feature. On top of that, players can also retrigger the feature by landing another 3 or more egg Scatters anywhere on the reels, so you can gain even more freespins. Last but not least, there’s also a Progressive Jackpot that you can win at any point in the base or bonus game. 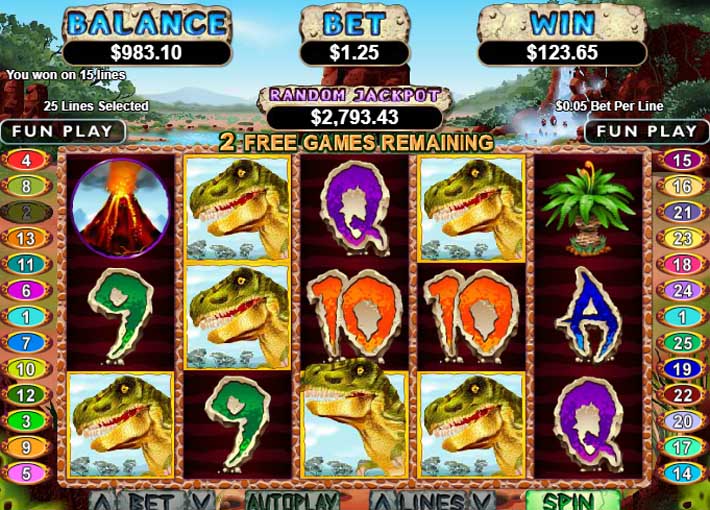 T-Rex is a very decent offering from RTG that has a simplistic, but rewarding approach to gameplay. There’s just one special feature, but it gives you both freespins, as well as more Wilds. And on top of that you get to be entertained by a t-rex that’s eating the other dinosaurs! Visually, the slot doesn’t compare to some of the latest titles by this provider. But it’s still just as exciting and is plenty of fun.