Dracula’s Family is a cre-e-epy slot game by slots provider Playson. Focusing on the world-famous Count Dracula, this vampire-themed slot game boasts some pretty impressive graphics and a very cool design. Even the soundtrack has an awesomely eerie feel to it. Set somewhere in the depths of Dracula’s castle, the reels introduce us to his odd family. We’ve got his lovely wife and moody teenage daughter. There’s also a green monster, who we can only assume must be the butler. Or perhaps some very distant relative. The lower value playing card symbols are also styled to fit the theme perfectly. In fact, so much so, that some are hard to recognize as such, like for example the Q symbol, which is disguised as a draped mirror. 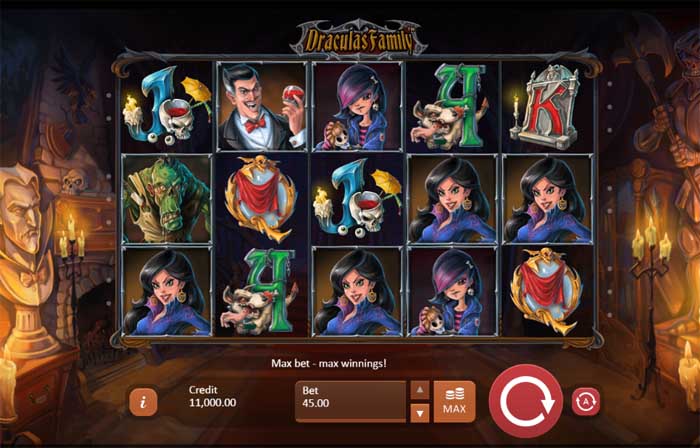 The layout in Dracula’s Family online slot has 5 reels and 3 rows. The total number of paylines amounts to 15, but as is often the case with games by this provider – they are fixed. Wager amounts, on the other hand, are far more flexible. You will be able to stake anything from 30p per spin up to the maximum of £45 per spin. The slot RTP, however, isn’t too impressive and only reaches the mark of 95.55%.

Whether they are Dracula’s sons or in some other way related to him, the two mischievous little twin brothers are the Wild symbol in this slot game. One of them has a sling shot in hand and won’t hesitate to use it, when forming a winning combination. And speaking of those, the Wild will be able to replace any of the other symbols to contribute towards your payouts. However, there is one exception and it is the Scatter symbol. In addition, the Wild can only appear on reel 5, but will convert two whole reels into Wilds, when it appears.

You will notice that the Scatter symbol comes in the form of the game logo. The Scatter isn’t particularly lucrative, but it will be able to trigger the bonus feature. And to do so, you will need to land 3 Scatters anywhere on the reels. Before the freespins actually start, though, you will have four freespins modes to choose from. At first, only the Mad Multiplier mode will be available, with 15 freespins and up to a 5x multiplier. After you have played it for three times, you will unlock the next mode, and so on. 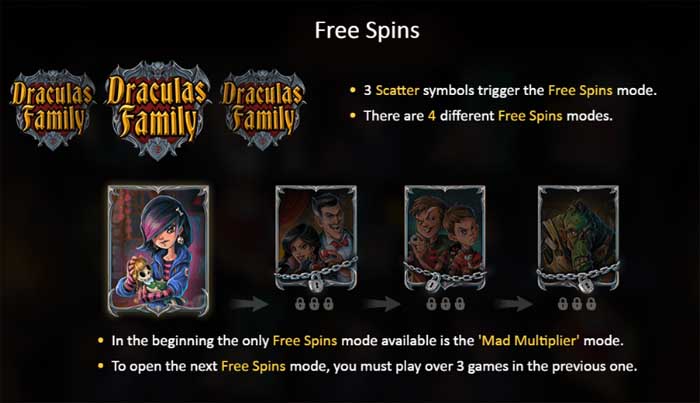 You will also have the opportunity to retrigger any freespins feature, by landing another 3 Scatters anywhere in sight. This will reward you with another 15 freespins on top of the ones you have left.

Dracula’s Family is as volatile a slot game as it is fun. It may seem like a bit of a pain that you don’t have all the freesipns modes at your disposal from the start. And really may turn out to be one. But the number of freespins you get, as well as the multiplier option, in combination with the possibility of retriggering the feature – all that kind of makes up for it.