Sky Way is an aerial themed slot game by casino games provider Playson. It features a really epic and dramatic soundtrack, which sets the mood for some real action. Set somewhere high up in sky, just above the clouds, you will find yourself looking at a heavenly backdrop. This game is all about the early days of aviation and includes the characters from the crew of an airship. In fact, you will get to see the airship as well. Aside from that, you will also see other vintage essentials of an aircraft like that, such as the globe and a gauge. In addition, the developers have also included the lower value playing card symbols A, K, Q, J, 10 and 9. 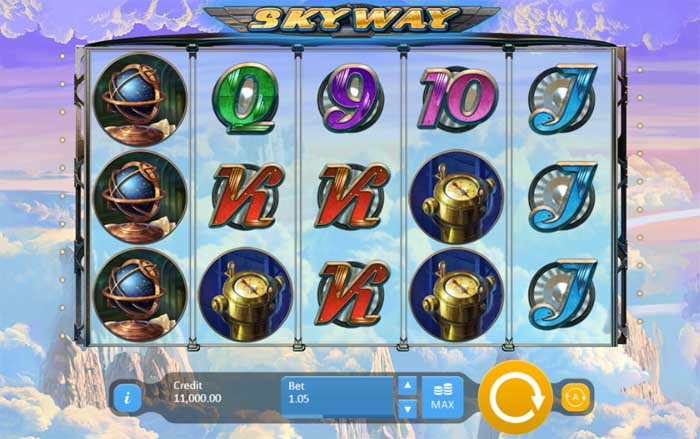 The layout in Sky Way features 5 reels and 3 rows with a total number of 21 paylines. Playson games do have a tendency to have odd numbers like that. But the controls just below the reels will help you adjust them and play with less, if you so choose. Otherwise, the betting range at your disposal is between 21p per spin and £105 per spin. The RTP isn’t exactly the highest, though, at around 95.24%.

One of the symbols of interest that you will want to keep a special eye out for is the pilot. She is also the most valuable icon, giving potential payouts of up to 9,000 times your line bet. But more importantly, she is also the Wild symbol in this slot game. As such, appearing in any position on the reels, you can expect her to replace any of the other symbols to help create winning combinations. However, it cannot replace the Scatter symbol.

The Scatter, in turn, is also quite valuable, offering up to 250 times your total bet. It is in the shape of the airship itself and can also appear anywhere on the reels. However, you will be looking to land 3 or more of it, in order to trigger the freespins bous feature. As a result, you will receive a total of 16 freespins. You will notice that the Scatter will slightly change in its appearance during the freespins feature. That is because, aside from being the Scatter, it will also act as an extra Wild.

Furthermore, you will also have the opportunity to trigger 16 more freespins by landing another 3 or more Scatter during the feature. And let’s not forget this game’s Gamble feature, which may come in handy. You can choose to make use of it after any winning spin to access a simple side game of double or nothing. This will either double your wins or have you lose them all, depending on whether you guess the color of the playing card in the game correctly or not.

Sky Way is a well-designed slot game, with decent graphics and an interesting theme. It’s also very well suited for new players, due to its low variance, which will make for small, but frequent wins.