Dragon Shrine is an unusually bright and light slot game by software manufacturer Quickspin. Despite what your first impression may be when the game loads, this is actually an Asian themed slot. The soundtrack and traditional Asian dragon depictions will give it away at second glance. The backdrop here is very airy and heavenly even, which is very atypical for slot games that share the same theme. But that’s a good thing, because we’ve all seen plenty of the traditional red and gold color schemes, when it comes to Chinese styled slots. The symbols here include the lower value playing card symbols, ranging from Ace to 10. In addition to them, there are four different colored gemstones: white, blue, green and pink.

The layout here isn’t something you see very often, either. There is a total of 5 reels, whereas the first and last only have 3 rows. The middle reels 2, 3 and 4 have 4 rows each. There are 40 fixed paylines and stake amounts can span from 20p per spin up to £100 per spin. Players can count on an RTP of 96.55%.

There are three special symbols on these reels, and we’ll start off with the Wild. It is the most valuable symbol here, offering up to 10 times your bet amount. In addition, it can appear in any position on the reels and replace any of the regular symbols. However, it cannot replace the other two special symbols: the Bonus and the Scatter. 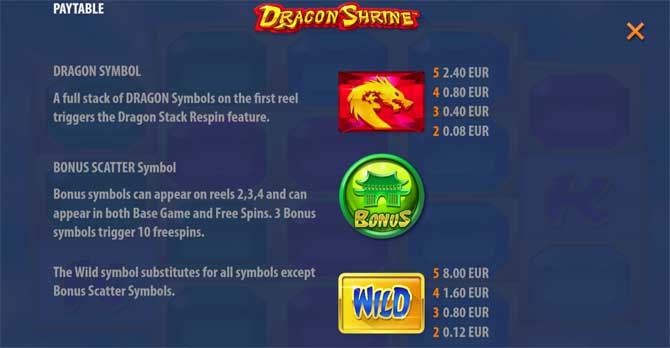 The Dragon Scatter symbol can appear stacked on reel 1 and that is what you will want to look out for. This will trigger the Dragon Stack Respin feature, awarding you three consecutive respins. What’s more, any additional Dragon or Wild symbols that appear on the reels will remain in place throughout the duration of the feature.

The third and final special symbol offers its own bonus feature and comes in the form of a traditional house. This Bonus symbol can only appear on the middle reels 2 to 4. If you land all three Bonus symbols you trigger the freespins feature. This, in turn, will get you a total of 10 freespins. During this freespins bonus feature, players will have the opportunity of triggering the Dragon Stack Respin feature by landing stacked Dragon Scatters on either reel 1 or 5. Whichever the reel, the opposite one will mirror the stack, providing two stacked reels. And what’s more, you can also retrigger the freespins feature by landing another 3 Bonus symbols for an extra 10 freespins.

Dragon Shrine is a neat and fairly entertaining slot game. The graphics and soundtrack are very pleasant, and there’s enough variety ensured by the 2 bonus features. Variance here is in the medium range, so it can make for some satisfying wins.