Fairy Gate is an online slot game by software developer Quickspin. This title boasts an enchanting atmosphere, magical theme and equally magical and compelling visuals. Heck, there’s even a lovely soundtrack to amplify the overall vibe of this online slot game. If you happen to like fairies and all things green and mysterious, then this will certainly be the game for you. Typically for this developer, the graphics are of outstanding quality, so you can actually enjoy gameplay visually as well. The backdrop transports you to an enchanted forest, with a massive tree that must be where the fairies live. You can make out the door in it with encrusted ornaments running all the way from top to bottom. The reels, by the way, are set to the side of the screen so you can have a better look at it. We actually find the asymmetry to be a nice and refreshing touch to the design. 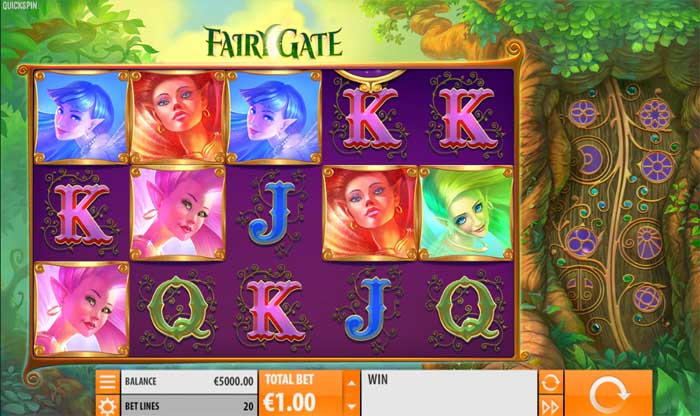 As for the symbols on these reels, they start off with the lower value playing card icons. There are only four of these and they feature A, K, Q and J. Each comes in a different color and might as well be taken directly off the pages of some luxurious story book. Next are the higher value character icons, of which there are also four symbols in total. These are all different fairies that come in different colors, too, for ease of distinguishing. First are the blue and green fairies – they both offer the same payouts. Then there’s an increase for the pink fairy. And last but not least is the highest paying fiery red fairy. The layout in Fairy Gate features the conventional grid of 5 reels and 3 rows. In addition to those, there are 20 paylines here in total. These, however, are fixed, so you won’t be able to regulate them. The betting range in this title is fairly flexible, though. It spans from a minimum stake of 20p per spin up to a total of £100 per spin. And the RTP here is also very agreeable at 96.66%.

Players will likely be happy to know that Fairy Gate boasts two whole special features. But first let us introduce the special symbols, the first of which is the game’s Wild. It is also as lucrative as the red fairy symbol and, just like it, will be able to land in just about any position on the screen. In addition, the Wild will also be able to replace any of the regular symbols in this game. And in doing so, it can create more winning opportunities to help boost your winnings. There is an exception that the Wild will not be able to substitute for, however, and this is the Bonus Scatter icon. 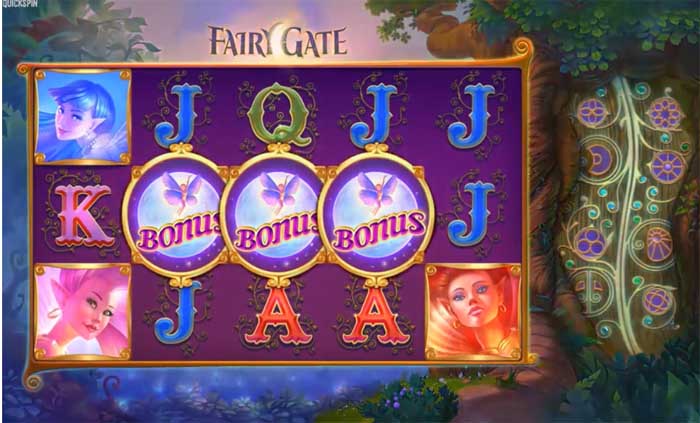 It, in turn, can offer no payouts of its own and can only appear on the middle three reels: 2, 3 and 4. It pictures a mirror with the reflection of a fairy in it. But the Bonus Scatter will be able to trigger the main special feature in this title – the freespins bonus round. For this to happen, though, you will be looking to land all three Bonus Scatter symbols during the same spin on the reels. Once this happens, you will receive 10 freespins on a new set of 7 reels. On these extra 2 reels you can land a new type of symbol – the Fairy Orbs. They can land on each of the freespins, awarding you extra Wilds. So, potentially you can benefit from up to 5 additional Wild symbols during a spin. 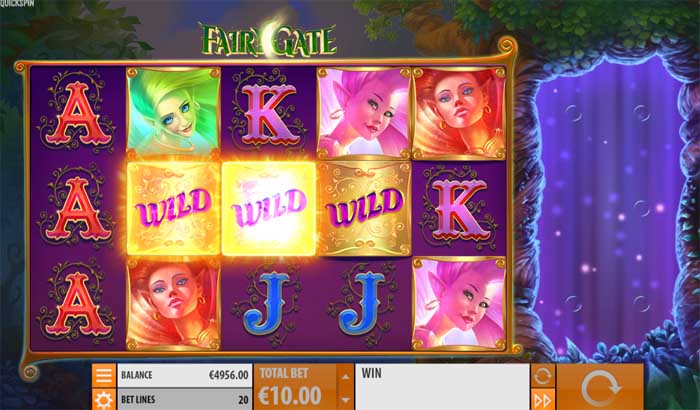 The Fairy Orbs are also part of another special feature in this online slot game – the Fairy Wild Respins. This is a random feature that can take place at any point during gameplay. As a result, the doors of the tree in the backdrop will open to reveal the two extra reels. Then you will get to enjoy a respin, as a result of which you can gain anywhere from two to five extra Wilds. These will appear randomly on the reels, as a result of the fairies from the Fairy Orbs that fly onto the main set. So, potentially, you can get some pretty good prizes.

Fairy Gate is a very decent, medium to low variance title with some decent winning opportunities. It has a great setting with compelling visuals and a pleasant backing track. But on top of that it also has a freespins round and random feature that can prove fairly rewarding. You will find that you will be able to trigger the freespins round at relatively even intervals, so not too often, but also not just once in your lifetime either. All in all, you can count on a maximum possible prize of up to 532 times your total stake.