Ghost Slider is a spooky slot game coming from casino software provider Merkur Gaming. Visually speaking, this is also a more compelling Merkur offering to be available. So, with that in mind, this makes for a very pleasant overall gaming experience. The theme does center on ghosts, eerie mansions, candlelight and tombstones. But it’s nothing all too scary, although you may want to turn down the sound of the game before you start playing. The backing track may be slightly overwhelming. The backdrop takes you outside, to a cemetery – at night. There are creepy, bare tree branches visible in the distance, to add an extra layer of spookiness. And to the sides of the reels you can see stone walls with vines and ivy crawling over them in every direction. You will also notice a set of tombstones at the top of the screen, but they are more than just part of the entourage. 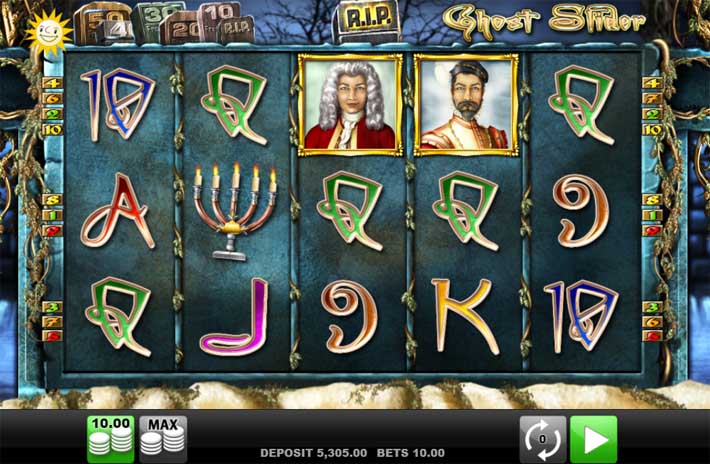 The symbols in Ghost Slider start with the often-seen playing card icons. These are slim and wiry, which oddly fits in well with the theme. And they each also come in a bright colour, as is usually the case. The symbols present are A, K, Q, J, 10 and 9. Next are the higher paying icons, beginning with a candelabrum icon. After that we have a symbol depicting a good with a hand print on one of its pages, following which is a cuckoo clock symbol. And rounding everything out, the highest paying icon on these reels pictures a large, (haunted?) mansion. With its help you can pocket up to 500 times your total stake in payouts from a winning combination. Now, as for the layout, it is pretty traditional and features the most common grid of five reels and three rows. The game offers a total of only 10 paylines, and these will not be subject to any form of adjusting. This also affects the stakes accordingly, but they are well within reason. The minimum possible betting amount on these reels is 10p per single spin. And the most you will be able to wager per spin here is £20.

Ghost Slider boasts not one, but three whole Wild symbols. True, none of them offer any payouts. But they will still be able to fulfil their wildly duties anyway. All three Wilds come in the form of portraits of men, and when you see them partake in winning combinations, they will turn into ghosts and fly away from the reels. What’s more, all three of the Wild symbols are able to show up in just about any position, anywhere on the five reels. They can also appear at any point during both the base and bonus games. And on top of all that, they can also substitute for all of the regular symbols and help complete winning sequences. There are no exceptions as to the symbols the Wilds can replace.

With that in mind, we should also point out that there are no Scatter or Bonus symbols on these reels. There is a bonus game, nevertheless. But to trigger it, you have to go through a slightly different route to the conventional “land-three-matching-symbols” approach. 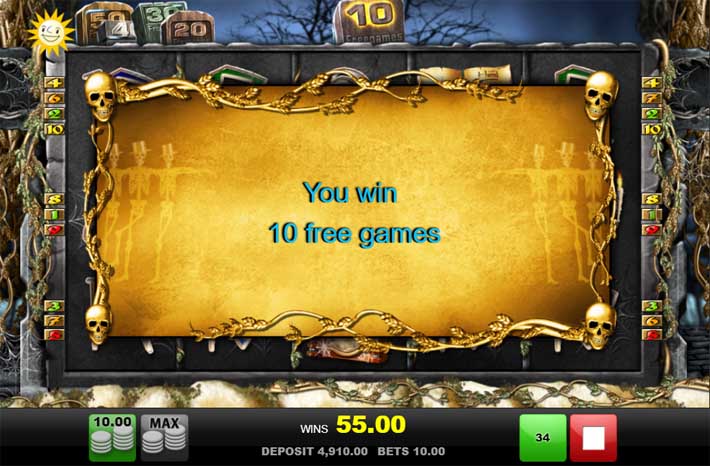 Your fourth consecutive winning combination will award you 10 freespins, with each next giving you 20, 30, 40 and finally – 50 freespins. In addition, this game also boasts a Gamble feature. So, you can take advantage of it after any winning spin during gameplay. What’s more, it will offer you 2 different side games. One is a cash ladder game, and the other is a double or nothing game of cards. The objective in it is to guess the correct card colour. Correct guesses double your amount, whereas wrong ones end the feature and you forfeit your prize.

Ghost Slider is a pretty volatile offering from Merkur, but it also happens to be a fairly entertaining one. The concept of activating the bonus feature alone is unique and fun. On the downside, it may take some sweating to actually reach the freespins in this title. The good news, however, is that thanks to the tumbling reels feature, the freespins bonus can also prove to be very lucrative. And to prevent dry spells in the base game from getting to boring, there’s always the Gamble feature to make use of.