If you’re feeling a little nostalgic and would like to play a game that will provide that specific retro one arm bandit slot machine feel – check out Double Triple Chance by software developer Merkur Gaming. It has all the traditional symbols and even a very basic, vintage style layout that makes for the traditional slot machine look. The backdrop is equally simplistic and doesn’t depict any elaborate scenes that would distract you from gameplay. As for the symbols, they’re all very familiar, as well. They start off with the green diamond shaped symbols, which are the lowest value icons. Then they make their way up past the different fruits symbols, such as the lemons, cherries, oranges and plums. Finally, there are the gold bells and the traditional lucky 7s, and last but not least is the diamond symbol. 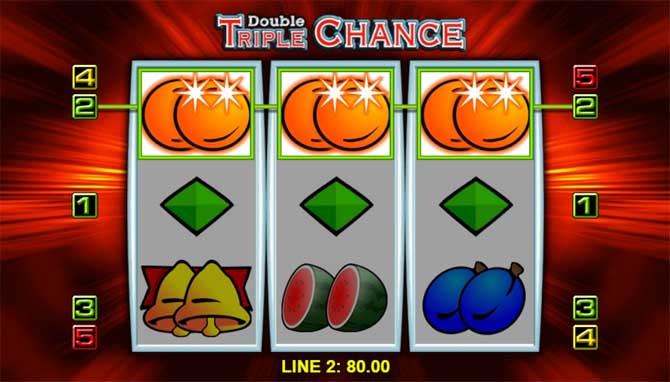 The layout, as we already pointed out, is very simplistic, featuring 3 reels and 3 rows. There are only 5 paylines here, and you won’t be able to regulate them. The betting range is the same as in most Merkur games, starting at 5p per spin and going up to £10 per spin. Slots by this developer also tend to have roughly the same RTP and this one is at around 95.65%.

As this is a retro styled game, don’t expect too many extras. In fact, don’t really expect any extras. There are no Wild symbols here to help you create winning combos, when you lack that one or two necessary symbols to score a win. There also aren’t any Scatters to make for bigger payouts or trigger bonus features. With that said, there are also no freespins, no thrilling bonus rounds and multipliers either. 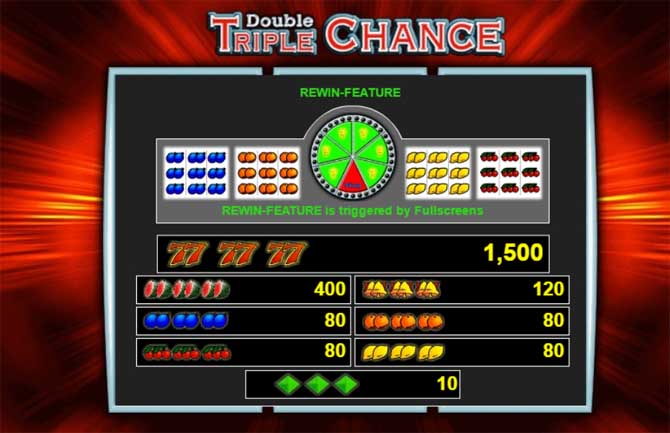 In addition, this game also boasts a ReWin feature, which will further allow you to increase your cash prize. It will occur whenever you manage to fill the screen with all nine symbols of a kind. Thus, you will have essentially landed winning combos on all five active paylines. As a result, the screen will then show you a Wheel of Fortune. There will be only green and red sections on the wheel, and as long as the pointer lands on green, you will continue to receive payouts for that full screen of the same symbol. Once the pointer lands on red, the feature will end.

Double Triple Chance may seem like an overly simplistic slot game and gameplay really is pretty basic. However, you can benefit from some pretty massive wins, thanks to the extra feature, especially including the ReWin feature.