Gold Star is an online slot game by software manufacturer Red Tiger. Traditionally for this developer, the graphics here are really fresh and up to standard. And as sophisticated as the design may seem, it’s also equally simple. The theme in this online slot is party, but a very classy kind of 60s style party. The color scheme would suggest as much, with all the colors of the rainbow in it. You will see smiling stars wearing star sunglasses – why not? As for the symbols, they include the lower value playing card icons A, K, Q, J and 10. Following them and increasing in value is a microphone, the said star-shaped sunglasses and an LP player with a gold record. Last but not least is the highest value symbol – the game logo. 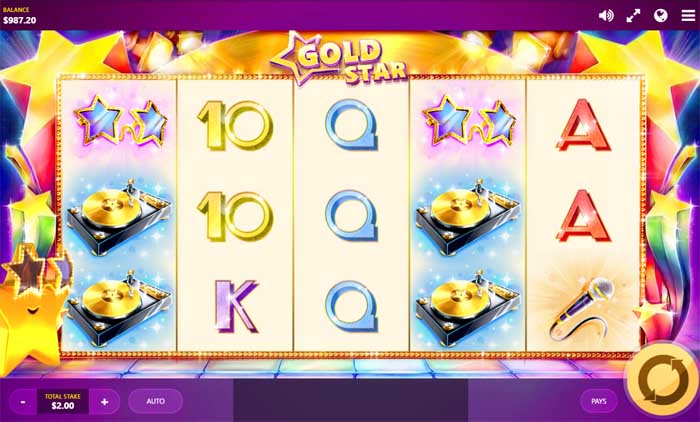 The layout in Gold Star is pretty basic and features just the regular grid of 5 reels and 3 rows. There are 20 paylines here in total, but they will not be subject to your adjustment. On the bright side, though, you will also be able to benefit from all wins paying adjacent, which is a great opportunity for landing more wins. And as far as the betting range goes, it spans from 20p per spin up to a maximum of £100 per spin. The RTP here is at around the 95% mark.

One of the main features of this slot game (and there aren’t really many of those) is the fact that all symbols here can appear in stacks. This automatically contributes to your winning opportunities. And you will especially want to look out for the game logo symbol with that in mind. It can offer you payouts of up to 888 coins for landing 5 on a payline! 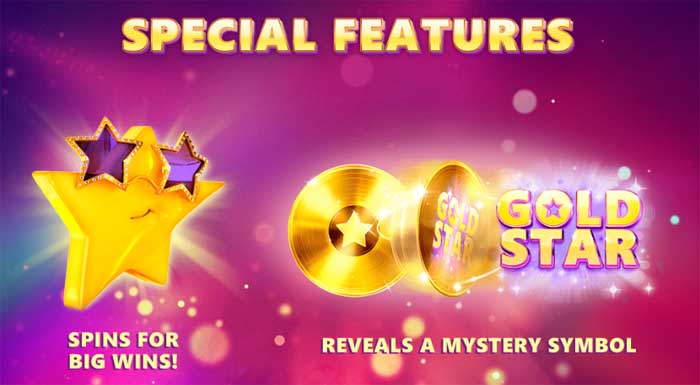 Now, there’s no actual Wild symbol in this slot game. But there is a mystery symbol that comes in the shape of a gold record. In a sense, it also acts as a Wild, but only in a sense. Whenever it lands on the reels, it will transform into a random other symbol to help you create winning sequences. All of these mystery symbols that appear during the same spin will transform to become the same symbol.

The other symbol you will want to keep an eye out for is the Gold Star symbol. It can come onto the reels at any point during the game completely at random. And when it does, it will add even more mystery gold record symbols for the possibility of landing even more winning combos. But that’s about all there is in terms of features here. No Scatters, no Bonus symbols and no freespins rounds or anything of the sort.

Gold Star is very charming and has a fun feel to it, especially thanks to the design and the soundtrack. But gameplay is extremely basic with pretty much only one extra feature here. This may strike some players as boring, but if you’re more for a minimalistic approach – give Gold Star a spin.