Happy Jungle is as descriptive a slot game title as they come. This online slot game by software provider Playson pictures the palm tree lined coast of Madagascar and the reels are filled with its various wildlife representatives. And there’s even an upbeat jungle soundtrack to keep things more genuine and authentic. The control bar probably exhibits the most detail and is actually a pleasure to look at. Lush greenery, polished stones for buttons and wooden planks, showing the different values – all display high-quality graphics. As for the reels, they include the lower value playing card symbols, some in the form of carefully trimmed bushes. The higher value ones include penguins, hippos, lemurs and other monkeys. 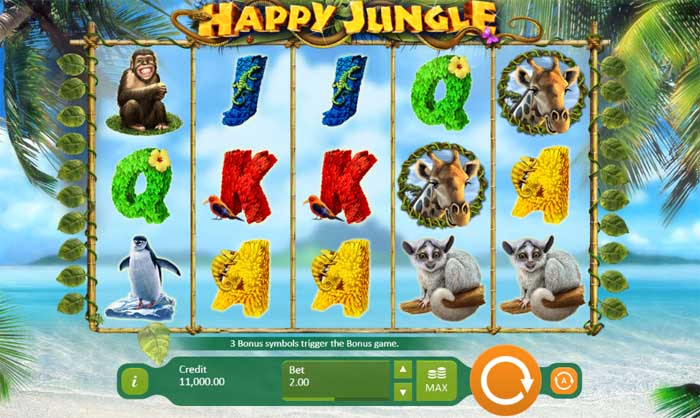 In the frame of several tied together sticks, the layout features 5 reels and 3 rows. The total amount of paylines available in this slot game is 20. And, unlike how it is in the majority of other Playson games, you will be able to regulate that number. Furthermore, you will just as easily be able to control your betting amounts, with stakes starting as low as only 20p per spin. The RTP is neither too low, neither very high, at exactly 95.15%.

Among the numerous flamboyant symbols on these reels, among the most important ones is the Lion Wild symbol. It is the most lucrative of all other icons. But what’s more, it will also be able to substitute for any of the other symbol in this game. It can also appear in any position on the reels. But the only symbols it cannot replace are the Scatter and Bonus symbols.

One of the most recognizable endemic species of Madagascar – the lemur – is the game’s Scatter symbol. You can expect to see it in any position on the reels and it can offer you payouts of up to 50 times your total stake amount. The Bonus symbol, on the other hand, pictures a bunch of tropical fruit, including coconuts, pineapples and bananas. This is the symbol you will really want to look out for, as landing three or more of it will trigger the bonus feature.

The Bonus Game consists of four different levels. First you will enter a pick-me game, in each of which you will need to choose from 5 cells. Revealing different fruit symbols will increase your prize and you will move on to the next level. Landing an empty cell, though, will end the feature. If you successfully pass all other levels, you will reach a new screen with at least 25 freespins. And let’s not forget the Gamble feature, which can help you increase your winnings. You can access it at any point after a winning spin and it consists of a simple double or nothing side game.

Happy Jungle is a relatively entertaining slot game with high quality graphics and a fun theme. This is a medium variance slot, so you will be able to trigger the bonus feature fairly often.