Microgaming is one of the leading and most popular slot game developers in the world. And Immortal Romance just so happens to be its arguably most successful release to date. Even though it’s been around for a few years now, this game still never fails to attract the attention of flocks of players throughout the various online casino platforms. It offers a compelling atmosphere, brilliantly balancing it with lovely graphics and very rewarding features. In addition, the enchantingly melodic soundtrack works splendidly towards achieving that mysterious and romantic feel. The developers have included the lower value playing card symbols, styling them to match the theme. They each showcase their own unique little details, like an old book here, or a pocket watch there. Following these is probably the most romantic symbol on the reels – a wine glass on a table beside a letter and a candle. Next is a castle and following it are the character symbols. First is a young dark headed woman – her name is Amber. After her are the two male characters in the game – Troy and Michael. Finally, the highest paying of the regular symbols is the second female character, who goes by the name of Sarah. Each of these characters has a unique story behind them, and you can read about it in the game. 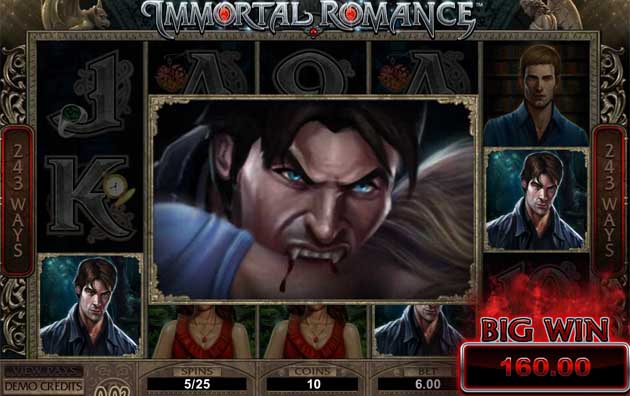 The game has a regular layout of 5 reels and 3 rows, with a total of 243 ways to win. Players are free to adjust the amount of coins they would like to bet, as well as the coin value. This gives them a betting range of 30p up to £6 per spin. The RTP here is 96.86%.

There are a number of interesting side features, such as the animated sequences that appear when you land a winning combination of the character symbols. But let’s get down to the more earthly aspects, such as the special symbols. We’ll start off with the Wild symbol, which depicts the game’s title, so you can’t miss it. It can appear in any position on the reels and will replace any of the regular symbols to contribute to winning combos. In addition, it also doubles your payouts, when part of a winning sequence. However, it cannot replace the game’s Scatter symbol, which is also the most lucrative symbol on the reels. Before we move on to that one, we must mention the Wild Desire feature. 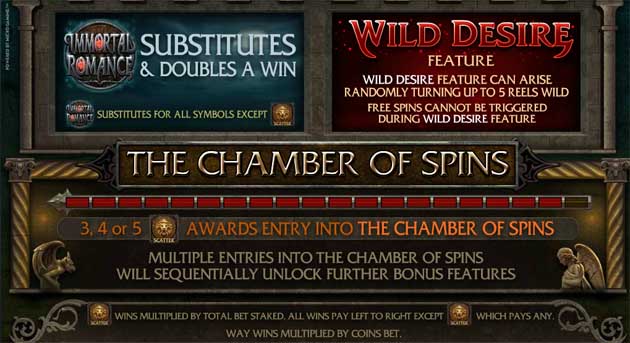 It is a completely random feature, which can turn up to all five reels on the screen fully Wild. This can make for some pretty substantial wins, but it’s not the game’s primary attraction. The Scatter symbol, which depicts a lion door knocker, is responsible for activating the most tempting feature – the freespins round. Called the Chamber of Spins feature, you will need to land at least 3 Scatters in order to trigger it. The feature has four different levels, each of which is represented by one of the characters you met on the reels.

The first one is Amber and she will grant you 10 freespins with a 5x multiplier and an option of retriggering the freespins. Next is Troy, who will offer you 15 freespins with a Vampire Bats feature. This will randomly turn different symbols in 2x and 3x multipliers, whereas you can receive a multiplier of up to 6x at a time. Following him is Michael, who will reward you with 20 freespins and a Rolling Reels feature. If you spin consecutive winning combinations during this feature, it will increase your multiplier. Thus, you can end up with a multiplier of anywhere from 2x to 5x. Finally, the last feature is brought to us by Sarah. She will award players 25 freespins with the Wild Vine feature. The Wild Vine is a separate symbol that can appear on reel 3 during this level. Look out for it, because it can randomly turn other symbols into additional substitutes. What’s more, you get to retrigger this feature by landing 2, 3, 4 or 5 Scatter symbols at the same time. This will provide you with an additional 1, 2, 3 or 4 freespins, respectively.

Immortal Romance is a fantastic slot game that keeps players spinning its reels, even years after its initial release. The Wild Desire feature, though not the main bonus, can offer truly amazing payouts, especially if it fills the whole screen with Wilds. The complexity of the freespins bonus feature is also great, because it offers players to choose their own bonus. Of course, this is only after they’ve triggered it a certain amount of times. But that’s exactly what adds to the overall enticement. If you decide to play a considerable amount of time on the lowest denomination, you can very well unlock all of the features.