Are you ready for some epic action? Join the fearsome beasts and brutal warriors for the battles in Warlords: Crystals of Power slot. This game is a Netent creation and offers some really impressive graphics. The soundtrack is just as epic: both ominous and uplifting, featuring a Celtic theme. The graphics are just as awesome, with very realistic animated features.

This slot game has 3 rows and 5 reels, with 30 paylines. You can bet with as little as £0.15 and all the way up to £150 per spin, which allows the possibility of hitting the maximum jackpot of jackpot win of £1,000,000. The RTP is a satisfactory 96.89%, but the abundance of special features in this game is sure to keep you playing.

Warlords: Crystals of Power offers a whole of three different freespins bonus features. First up is the Barbarian freespins bonus. To trigger it, you will need to land three Barbarian scatter symbols, which will grant you at least 9 freespins. If you manage to land another scatter during the feauture, it will give you an extra 3 freespins.

Landing Priestess scatters will trigger the Priestess feature and will give you 7 freespins and a multiplier for each scatter you land throughout the duration of the feature. Next up is the Samurai freespins feature. You will need to gather three Samurais on the reels to trigger this one. Keep an eye out for this one, because though it will only give you 5 freespins, each Wild symbol you land will stick in place. 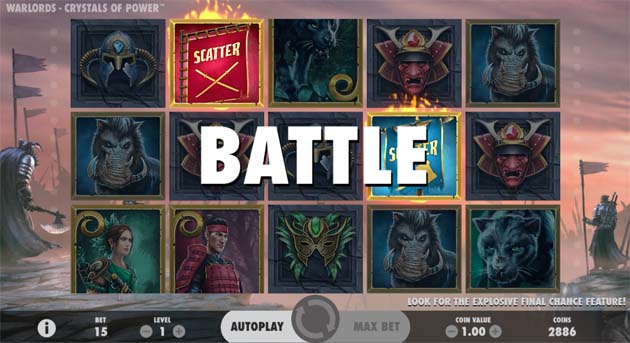 The Wild symbols here come in the shape of three different colored gemstones. Alone, they’re not all that special. But seeing as this game comes with a Random Overlay features, these gemstones suddenly become a lot more valuable. It basically allows the opportunity for more Wilds symbols to appear on the reels. Different weapons will reveal different Wilds, like for example the Barbarian Hammer Wilds will reveal 4 Wilds.

The Priestess Arrow Wilds will unleash anywhere from 2 to 5 wilds on the reels. And finally the Samurai Sword Wilds will give you 2, 3, 4 or even 5 wilds on reels 1 through 4.

If you manage to land two Scatter symbols of a kind on the reels, they will automatically grant you a re-spin. And if as a result of that re-spin you fail to land a third scatter, you trigger the Final Chance feature. This feature will reveal one symbol on the reels that will either grant you a coin win or the third symbol, necessary to trigger one of the freepins features.

As you can see from the above, this game simply doesn’t want to let you lose. It’s a great slot, with superb graphics and a really captivating atmosphere. Netent have really shown us their Viking heritage here. And the cool bonus features can really score you some impressive wins. 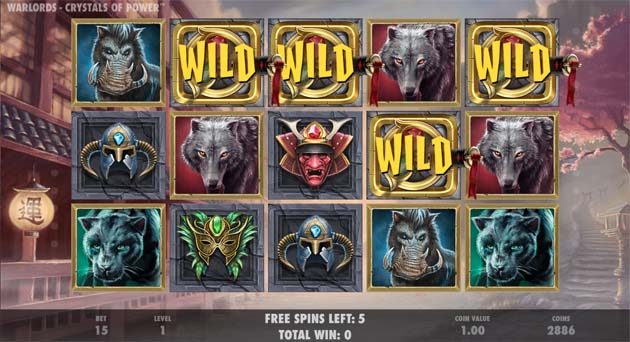 As with most modern video slots, the opportunity for the really big wins is in the bonus features. As mentioned previously, there are three different free spins features in Warlords, each with their own special features. The feature we like the most of these three is the red scatter feature (Samurai). In this feature, the wilds will lock wilds in place for the duration of the free spins, and it is this feature that has the biggest potential for big wins in our opinion. The green scatter (multiplier) feature can also be good if you get up to a high multiplier. The Barbarian feature where you get 3 extra free spins has the lowest variance of the three. You can get a lot of free spins, but since you don’t have a win multiplier or locked wilds, the wins will be smaller than with the other features.