Jurassic Giants is a prehistoric themed online slot game by software developer Pragmatic Play. Mammoths, sabretooth tigers, dinosaurs and even prehistoric humans all come together in this wild mix of perhaps not very chronologically aligned symbols. There’s also an epic soundtrack playing in the background to signify the gravity of those times. As for the backdrop, it certainly shows us a landscape more comfortable for the dinosaur population of this slot rather than anyone else. There’s a large lake, lush greenery… But if we forget for a second that most of the creatures on these reels don’t even belong to the Jurassic Era, there’s actually a certain charm here. The graphics are certainly not the fanciest, but they’re still pretty decent. And once you get started, that will be the least of your worries. 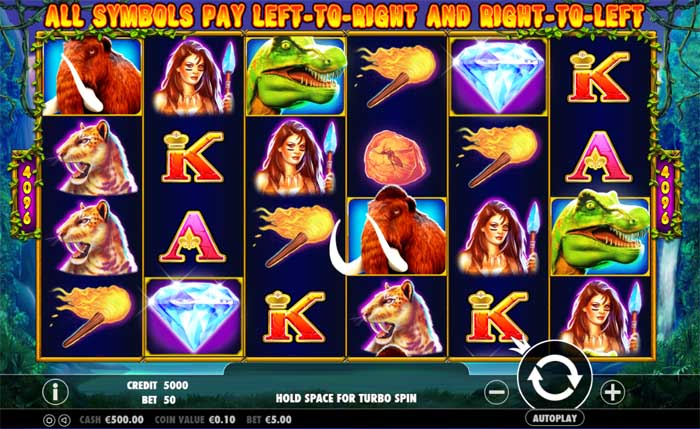 We must say, we would have expected slightly more from the lower value symbols in this slot game. They include the typical playing card icons, but the developers haven’t really done much to dress them up for this theme. So, you will just have to look at the regular A, K, Q, J and 10 the way they are in most other slots. Following them, though, we have the more appropriate jumble of thematic symbols. First is a torch, so fire was already a thing. And in the same value category there’s also the mosquito encased in amber – remind you of anything? Then there’s a slight increase in payouts for the sabretooth tiger and the female hunter. At least we know these two belong in the same period. And last but not least we have the two most lucrative icons: the dinosaur and the mighty mammoth symbols. The layout in Jurassic Giants is, however, rather unusual, featuring a larger grid of 6 reels and 4 rows. In addition, there are a whopping 4096 ways to win! The stakes here are understandably on the steeper side, though. Wager amounts span from 50p per spin up to £250 per single spin. As for the slot RTP, it’s actually decent at 96.01%.

The erupting volcano symbol on these reels is the Wild. As such, it will be able to replace any of the other symbols on the screen. However, don’t expect it to offer you any particular prizes of its own. It also can’t appear just about anywhere on the reels. In fact, you will only be able to land it on reels 2, 3, 4 and 5. Also, the Wild will be able to replace all symbols but one – the Scatter icon. Now the Scatter symbol, in turn, can appear on any of the 6 reels on this screen. What’s more, it will also be able to appear in full stacks, meaning it can cover the entire reels it’s on. It depicts a large brilliant diamond. However, just like the Wild symbol, it won’t be able to offer you any payouts of its own. 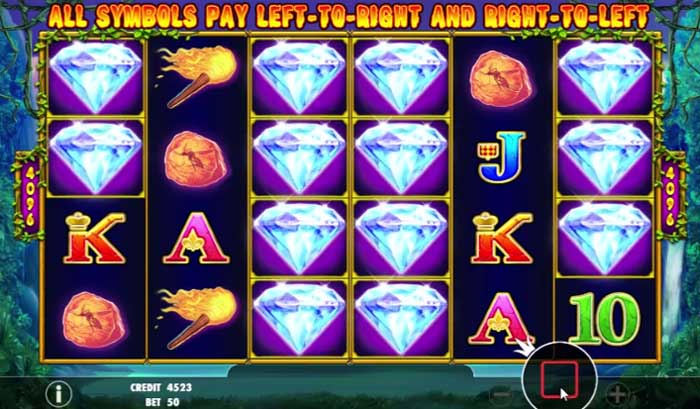 Instead, you can count on the Scatter to trigger this game’s single special feature – the freespins bonus round. The minimum number of diamond Scatters you will need to land in order to activate the feature is 10. This will reward you the minimum amount of freespins, namely 15. From then on, each next Scatter will add 5 freespins to that count, all the way up until you reach 50 (that’s 17 Scatters). Then, 18 Scatter symbols will award you 80 freespins, whereas 19 will give you 100 freespins. But that’s not all. If you manage to land 20 Scatters or more, you can count on a whopping 250 freespins! 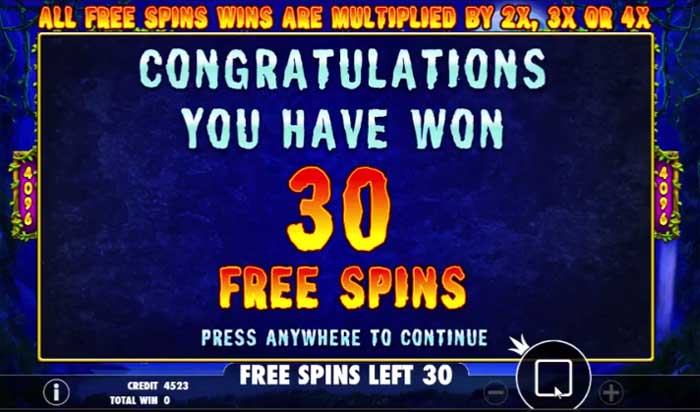 And as if that weren’t enough, you will also get to benefit from a random multiplier on all your freespins winnings. The multiplier can be 2x, 3x or 4x. But even that’s not all yet. Players will also have the opportunity to retrigger the freespins bonus round. As a result, you can gain even more freespins. And what’s more, there’s no limit as to the number of times you can retrigger the freespins. The same rules apply as in the base game, so this can potentially prove to be massively lucrative. Couple that with the game’s high variance – and who knows what amazing wins you can score! 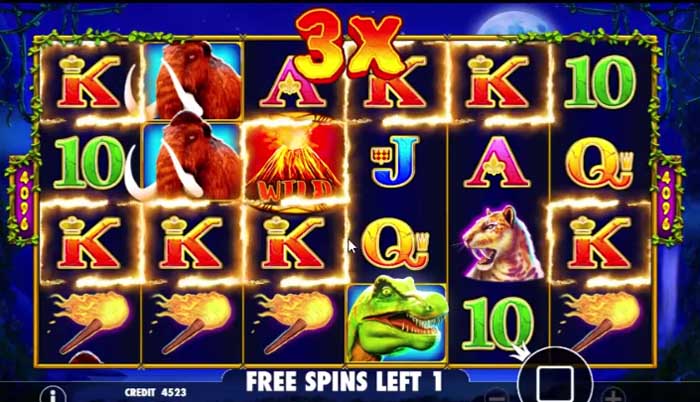 Pragmatic Play has certainly created a very appetizing slot game, with its main attraction being the crazy amounts of freespins you can potentially win. Not only that, but benefiting from multipliers, too. Of course, Jurassic Giants is after all a pretty volatile slot, so triggering the bonus round won’t exactly be easy. But once you do, big wins can come pouring in. It doesn’t hurt that the visuals are fairly entertaining, as well, though not historically accurate. But with the prospect of pocketing up to 4,000 times your stake from a single spin – who cares about accuracy?