Journey to the West

Journey to the West Slot Review

Journey to the West is a slot game by Pragmatic Play and it’s nothing that you might be expecting to see simply based on the name. What’s more, it’s actually quite the opposite. It’s really more of a journey to the Far East, as you can tell by the Chinese styled background. The reels demonstrate a very high graphics standard, but with a tinge of humor in them, too. First are the basic icons that feature some golden hieroglyphics. Following them are several 3D characters, including a fearsome looking bearded man. Next is a goofily smiling pig, after which is a Chinese prince and an ape with a golden headband.

Journey to the West has a 5 reel, 3 row traditional layout. There are 25 paylines in total, which you will not be able to modify. The game offers a theoretical RTP of 96.47%, which is fairly high. And you can bet starting with 25p per spin and going up to £125 per spin. 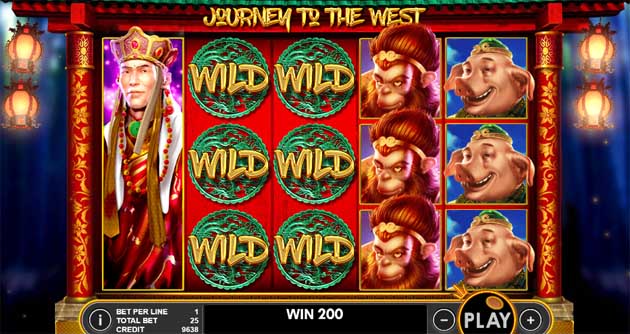 The Wild symbol in this game showcases and emerald green encrusted icon with the word WILD on it. It can replace any of the other icons to help create winning combinations. Its only weak spot, however, would be the Scatter symbol. The Scatter depicts a couple of gold dragon statues and can appear anywhere on the reels.

In order to truly benefit from it, though, you will need to gather a total of 3 or more during a spin. If you manage to do so, you will receive 5 freespins. But before you get to use the freespins, you will need to choose one of the 4 main characters of the game or the Wild symbol. Each one will offer you a different multiplier and stacked symbol. 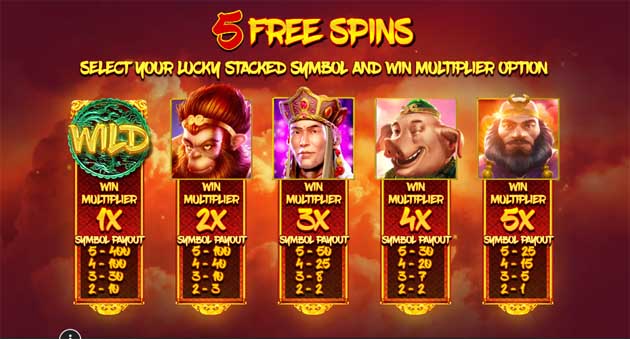 Each of these picks will provide you with its own set of reels, on which you will play the freespins. Obviously, each of those screens will feature its own set of stacked symbols, depending on the icon you chose. What’s even better, though, is that you have the opportunity to retrigger the freespins feature. All you have to do is land another 3 or more Scatter symbols during the freespins, to receive an additional 3.

Journey to the West is a fairly entertaining slot game after one of China’s classic literary works. The graphics make for a good feel and you can also win pretty decently in the game, too. It’s particularly nice that the game offers more diversity in its single freespins feature through the main symbols on the reels.