You want a degree of spookiness in your game, but nothing to really scare the bejesus out of you. In fact, a comic undertone might work nicely. Then you need to try the online slot game Count Duckula by software developer Blueprint Gaming. The title already reveals the theme and if you like cartoon-themed slots, you will love this one. Obviously, the main character here is Count Duckula – the vampire duck. He lives in an eerie castle on top of a steep hill, just as he should. And the backdrop here also depicts a no less creepy graveyard with rows of tombstones. There are some spooky and some downright corny sound effects in the background. There’s evil laughter, birds screeching, chains rattling and the screams of some tortured soul. And sometimes if you’re taking a break the count will even prompt you to not waste any more time. 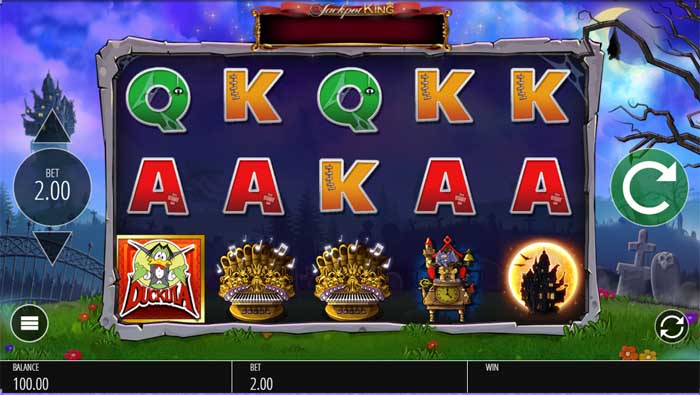 The symbols in Count Duckula feature the lower value playing card icons. These are stitched up, covered in cobwebs and bandaged. And the symbols in question are A, K, Q and J. After that we have mid and higher value icons, the first of which depicts the count’s coat of arms. Then we have an odd alarm clock, following which are the dark castle and an organ. And last but not least, we have the titular character himself as one of the game’s most lucrative symbols. Now as for the game’s layout, it’s fairly typical and features a grid of 5 reels and 3 rows. There are 20 paylines in the base game that increase to 40 during the bonus feature. Needless to say, players won’t be able to adjust these themselves. Therefore, the available betting range here starts at a minimum of 20p per single spin. And the maximum amount you will be able to wager per spin is £500. Keep in mind, however, that the average RTP of this slot is very low at only 93.35%.

Count Duckula also features another symbol that is as lucrative as the count himself and it’s the game’s Wild. It pictures a heart with a stake that has pierced it right through the middle. The maximum it can offer in terms of payouts is up to 500 coins. But in addition to that it can appear anywhere on the reels and replace any of the other symbols. In doing so the Wild will help create better winning combinations and therefore generate higher prizes. However, it will not be able to substitute for the only other special symbol in this title – the Bonus symbol. 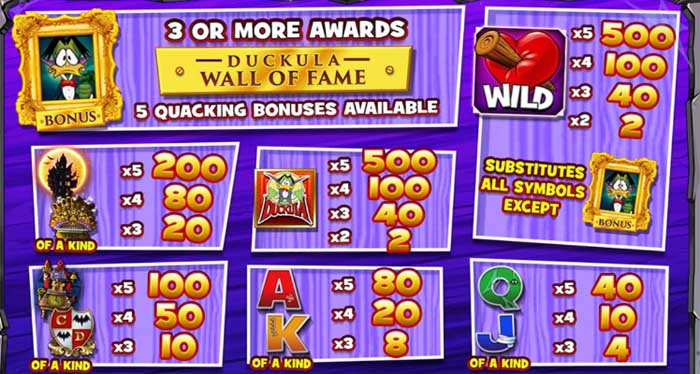 Before we venture into the main bonus feature, let’s first mention the four different random features that can take place at any point during gameplay. One of them is the Count Duckula Wilds feature, during which the main character will walk onto the reels. He will then turn a random symbol on the screen into a Wild, which may cause other Wilds to appear on the screen. A spin will follow, with all the Wilds in place for it. Then there’s also the Count Duckula Winged Win Spin, which will add jackpot symbols to the reels. Another feature is the Nanny Colossal Spin, which adds a Colossal Wild symbol onto the reels. And last but not least is the Igor Mystery Potion feature awarding mystery symbols. 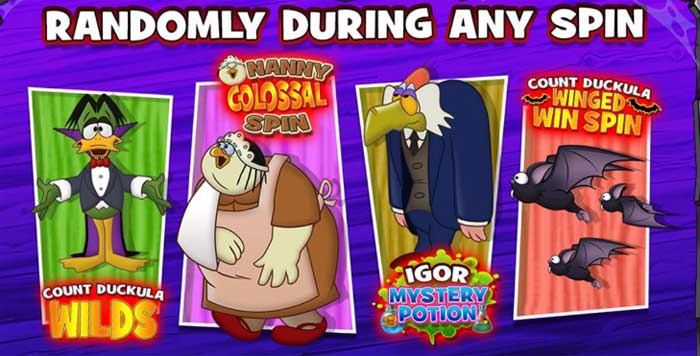 This brings us to the Bonus symbol, which is the portrait of Duckula. It can also land in any position on the screen. But for you to trigger the Duckula Wall of Fame bonus feature, you will need to land a minimum of 3 of these symbols at the same time. As a result, you will get to spin a sort of wheel of fortune, which will determine which of the five bonus rounds you get to play. 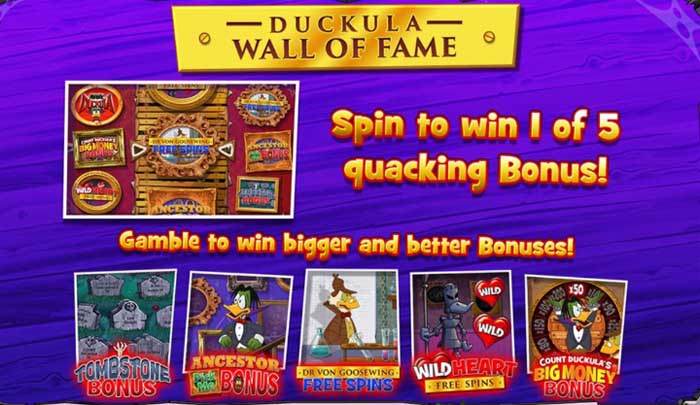 For example, one of them is the Tombstone bonus round, featuring a pick me game with various cash prizes. Then there’s also the Dr Von Goosewing Freespins feature, which will give you 10 freespins with Sticky Wilds. Another freespins feature is the Wild Heart round, which is played on a bigger grid with twice as many paylines. Count Duckula’s Big Money Bonus features a money wheel with multiplier values. And last but not least is the Rapid Cash Pot feature, which is a mini jackpot that you can win.

Count Duckula has an abundance of special features to offer players. From the four random ones, to the five different bonus rounds in addition to the mini jackpot – there’s something for everyone. And there’s also a very decent balance of wins all throughout gameplay, which is great. Furthermore, we thought the theme was very fun and entertaining in itself, too. Plus, it doesn’t hurt that the graphics are of good quality either. All in all, we think it’s a worthy slot to check out, with its only downside being the low RTP.