Megasaur is an online slot game by software manufacturer Realtime Gaming. The theme is the Jurassic period – a time when dinosaurs ruled the planet. These giant lizards will be all over the reels and visible in the backdrop, too. So if you belong to the generation fascinated by these incredible creatures of the past, you will be sure to have a blast spinning these reels. First of all, the graphics are of very decent quality. And on top of that, the developers have included cool audio and visual effects to make gameplay that much more entertaining. In fact, some of them can even be quite terrifying, so watch out for those sharp teeth and hungry jaws. In the backdrop you can see a flock of pterodactyls in the distance, lying against the enormous full moon. And above and around the reels there’s lush, prehistoric vegetation, unlike anything we know today. But let’s now have a closer look at the symbols. 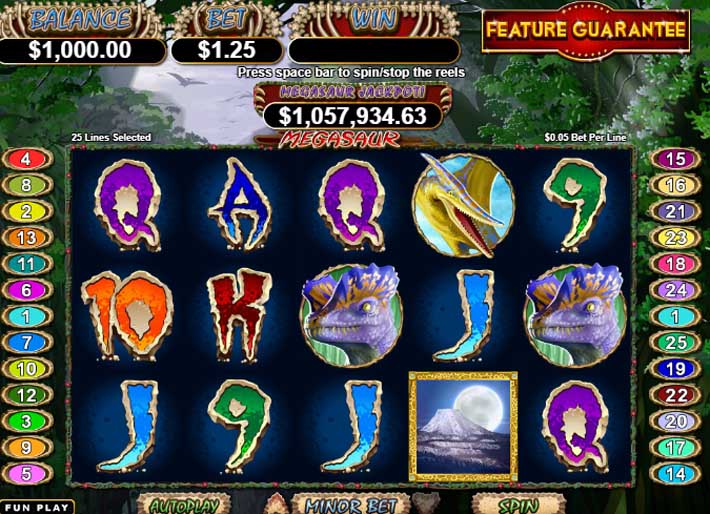 They start off with the lower value playing card icons. These include the symbols A, K, Q, J, 10 and 9. Traditionally, each of the playing card icons comes in its own bright color, such as orange, blue, purple, red and others. After them we have the higher value symbols, all four of which come in the form of different dinosaur species. First is the pterodactyl symbol, following which we have the vicious dilophosaurus. Next in line is the stegosaurus and last but not least is the triceratops symbol. This brings us to the game’s layout, which is quite conventional. It features a grid of 5 reels by 3 rows, and a total of 25 paylines. The paylines here are fixed, and therefore they are not subject to adjustment. And as for the available betting range, you will find that it’s quite limited itself. There are only three betting options in total. First is the Minor Bet of $1.25 per spin, after which is the Major Bet, which will set you back $2.50 per spin. And last but not least, the highest amount you can wager on these reels is the Mega Bet of $5 per single spin.

Note that Megasaur boasts two whole Wild symbols and both of them, ironically, are Megasaurs. One is red and the other – green. Keep an eye out for them, because when part of winning sequences, they can lash out at you from the reels. The Green Megasaur can only land on reel 2, whereas his Red counterpart will only appear on the 4th reel. Neither of them offers any payouts of their own. But both will have the capacity of substituting for any of the regular symbols. Thus, they will be able to help complete winning combinations and potentially boost your winnings. They cannot replace each other, however, and will also not be able to substitute for the game’s Scatter symbol. In addition, the Red Megasaur Wild will double the payouts for any winning combo it partakes in. 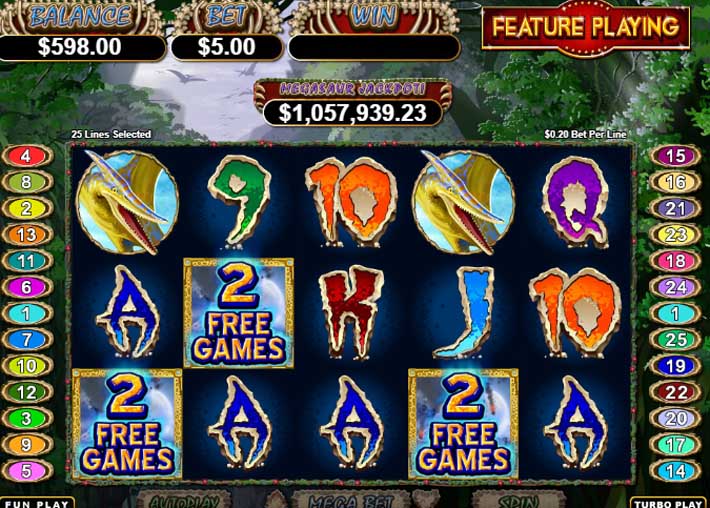 The Scatter symbol on these reels comes in the form of a volcano resting peacefully against the full moon. Unlike the Wilds, it will be able to appear in any position, anywhere on the reels. More importantly, though, the Scatter is your key to triggering the Megasaur Feature. Land 3 or more Scatters anywhere on the screen during a spin, and you will enter a pick-me game. The results of it will reveal the number of freespins you will receive, which can be 2, 5 or 10.

All throughout the duration of the feature, if you happen to land any Green or Red Megasaur, it will eat up all other dinosaurs present and replace them. So, they’re not just playing around – they mean business. In addition, you can also retrigger the feature by landing another 3 or more Scatters. This will award you extra freespins and more winning opportunities. 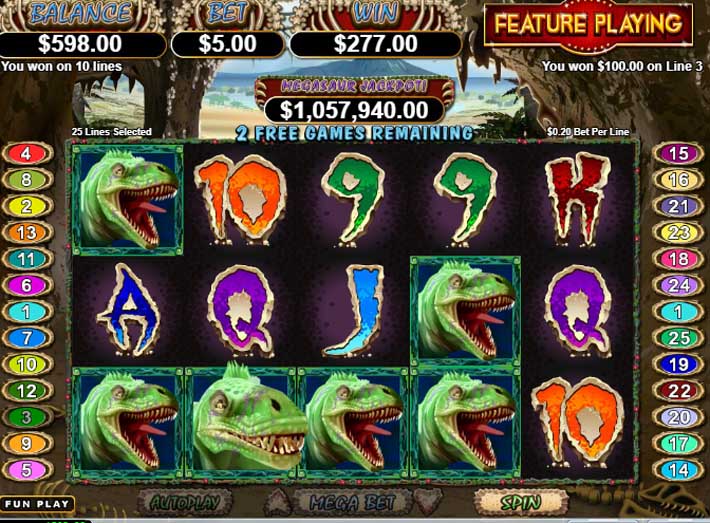 This game also comes with a Feature Guarantee, which makes sure that you will trigger the freespins within 26 to 250 spins. If the Megasaur feature doesn’t activate randomly, then the Feature Guarantee will activate it for you. On top of that, the Megasaur freespins also come with a Win-Win feature. This in turn ensures that you will get a prize, even if you didn’t win much from the freespins. To be exact, if you pocket less than 10x your total stake from the freespins, you can win up to 250x your bet.

Megasaur is mega fun on a number of levels. But it’s also very volatile, so new players best enter with caution. Even despite the Feature Guarantee, triggering the freespins bonus round may prove very tricky. But it is all the more rewarding, at that. Adding to the overall appeal of this RTG offering are the jackpots. Note, however, that your stake will determine your share of those jackpots, should you win them. The Mega Bet will award you all 100% of it.