Lucky 8 is a Chinese themed slot by manufacturer RTG. For those of you who don’t know, the number 8 is of great significance in Chinese culture, so it’s very often present in slots in this genre. And in this particular offering, it happens to be the center of attention. The backdrop here is solely made up of Chinese lanterns. They come in different bright colors and contrary to what you might expect, none of them are red. They come in neon green, blue, pink and purple for the most part. However, there is no real soundtrack audible that accompanies gameplay, besides just the sound of the reels spinning and coming to a stop. The graphics here aren’t of the highest quality either, but that is because this is a rather dated slot game. So don’t expect any fancy animated features, glossy HD visuals or anything of the sort. 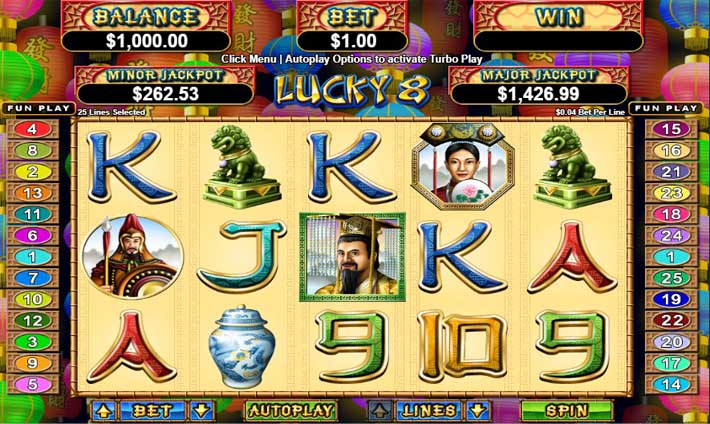 The symbols in Lucky 8 start off with the lower valuable icons. As is custom, these come in different bright colors as well. And we would like to point out that their design is perfectly in tune with the game’s theme. They have a very Chinese vibe about them and the symbols are A, K, Q, J, 10 and 9. Next in line is a tall, very beautiful blue clay pot or vase and a traditional Chinese guardian lion statue. After that we have a Chinese warrior, following which we see a symbol depicting the Great Wall. And finally, there’s a female character symbol (perhaps a princess?) as the highest paying of the regular symbols. The layout in Lucky 8 features a regular grid of 5 reels and 3 rows, with 25 paylines in total. You can regulate the paylines here freely, as you prefer. And the same also goes for the betting amounts, which start at a minimum of only 25c per single spin. The largest wager amount you can bet here is $6.25 per spin.

The Emperor symbol is both the most lucrative symbol on these reels and also the game’s Wild icon. As such, it has the capacity to substitute for any of the regular symbols on these reels. On top of that, it will also be able to increase your winnings by offering a multiplier. For every winning combo that the Wild takes part in, it will provide a 2x, 3x or even a 8x multiplier on the prize! On its own, though, the Wild can give you up to 3,888 coins in payouts. One more thing: the Wild will not be able to replace only one of the symbols present here and that’s the game’s Scatter icon.

The Scatter, in turn, comes in the form of the Lucky 8 symbol. It can land in any position, anywhere on the five reels. It is nowhere near as lucrative as its Wild counterpart, though. But instead of that the Scatter symbol will be able to trigger the freespins feature. For this you will need to land 3, 4 or 5 Scatters all at the same time during a spin, anywhere on the screen. This will award you a total of 8 freespins. However, in addition to that, you will also benefit from a random multiplier of 2x, 3x, 5x or 8x on each and every freespin. For each freespin a gong will reveal the multiplier. In addition, you can also retrigger the feature by landing another 3 or more Scatters at the same time. 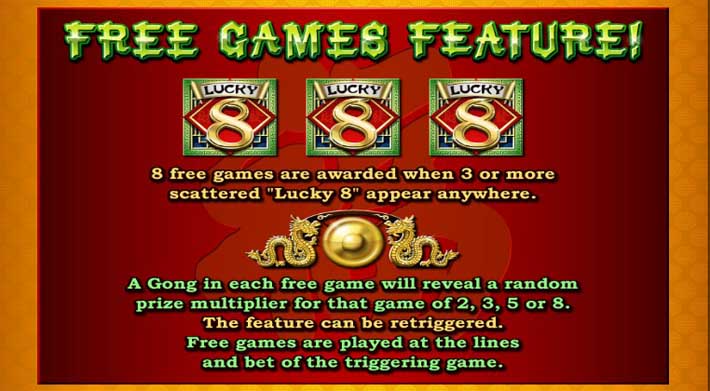 In addition, this title also boasts a Win-Win feature. However, in order to benefit from it, you will need to be playing on all 25 active paylines. The Win-Win feature can then take place after the freespins round if the overall winnings are less than or equal to 8 times your total triggering bet. As a result, you will receive a bonus prize that can be anything from 3 to 88 times your total bet.

Lucky 8 is a fairly simplistic game, with a straightforward approach to gameplay and a popular theme. The visuals aren’t of the latest quality of course, and there’s just one main special feature. But, it can be a fairly rewarding one at that and you even have a fallback in case the freespins don’t grant you satisfactory prizes. The Progressive Jackpot is another attractive part of this online slot game, so that’s something players will consider. As far as the variance goes, we would put this offering in the low to medium range.