Panther Queen is an exotic themed online slot game by software manufacturer Pragmatic Play. Set somewhere in the dense jungles of Mesoamerica, the backdrop demonstrates a waterfall in the distance – on one hand; on the other, it shows us a glimpse of an Aztec pyramid. There’s also a great, jungle soundtrack to support the theme, complete with animal noises. And speaking of animals, you will be seeing plenty of those on the reels, as well. In fact, they even come in some pretty high quality graphics. There are snakes, panthers, monkeys, toucans and exotic flowers. In addition, there are 5 different lower value playing card symbols, decorated in ancient Mesoamerican civilization style patterns.

You will notice that the layout here is slightly unusual. It features the customary grid of 5 reels and 3 rows, but there’s also an additional 6th reel, which is separate. The rightmost sixth reel only has multipliers on it, so you will want to keep a close eye on it, as well. There are 25 paylines here in total, but you will find that they are not subject to adjustment. Stakes, on the other hand, are more flexible and can span anywhere from 25p per spin up to £125 per spin. The average RTP here ranks at about 96.5%

Gameplay is slightly more different than what you see in most games out there. That is mainly due to the multiplier reel, which will offer you a multiplier of 1x to 10x for each and every spin. There’s also a pyramid symbol on that reel, but we will explain more about it in just a bit. 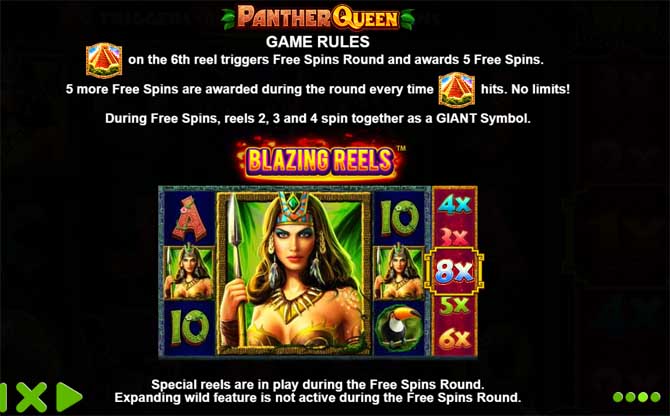 Panther Queen also boasts a Wild symbol in the form of a beautiful female warrior. She is among the most lucrative symbols on the reels and can land anywhere on the reels. Furthermore, she also has the capacity to replace any of the other symbols to help create winning sequences. However, her other super power involved being able to expand and cover an entire reel, when she lands in the middle position of that reel. Watch out for this, because if you can fill the screen with Wilds in this manner and land the 10x multiplier simultaneously, you’re in for a jackpot of a whopping 4,000 times your total stake! 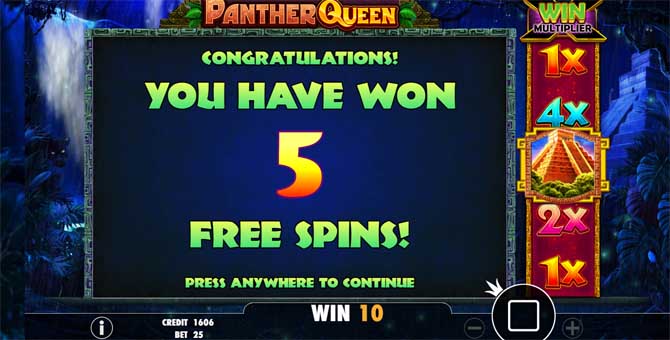 Last but not least, we mentioned the pyramid symbol on the sixth reel. Once you land it, it will trigger the freespins bonus feature, awarding you a total of 5 freespins. During the bonus feature, the middle reels 2, 3 and 4 will merge to form a Giant symbol. This can potentially make for even larger wins. Furthermore, you will also be able to retrigger the feature unlimited times and gain an extra 5 freespins each time.

Panther Queen has great visuals and even though the theme isn’t all that original, the developers have made an effort to make it fun. Furthermore, gameplay is unique and offers a very exciting gaming experience.