Queen of Gold is an Egyptian themed slot game by developer Pragmatic Play. And while this is not by far a rare or unique theme, some slots are better in it than others. And Queen of Gold certainly seems to be among the better ones. Visually, it’s quite rich and vibrant, offering great graphics quality and much color, in a very tasteful way. The backdrop offers a view over the Egyptian pyramids at dawn, with the sun bathing everything in different hues of pink, gold and orange. The reels stand out perfectly with a deep, satin kind of dark blue. Each of them has a sleek frame of gold and blue – the typical pharaoh colors. As for the symbols, they start off with the customary lower value playing card symbols. They are perfectly styled to match the theme and include only A, K and Q. Following them are the depictions of some of the most recognizable Ancient Egyptian deities: Bastet, Anubis and Horus. Leading the whole lot is none other than Queen Cleopatra herself

As far as the setup goes, you will notice that there are 6 reels and 3 rows. The sixth and rightmost reel has various multipliers on it and a Joker symbol. There are 25 paylines in total in Queen of Gold and you will be able to use them to bet as little as 25p per spin or anywhere up to £125 per spin. And as for the RTP, you can expect an average of about 96.5%.

Special Features in Queen of Gold

The pharaoh’s mask represents the Wild symbol in this slot game. As such, it can replace any of the other symbols to help create winning sequences. However, it cannot substitute for the Bonus symbol here. The Bonus symbol, in turn, is responsible for the most prominent feature that Queen of Gold has to offer. 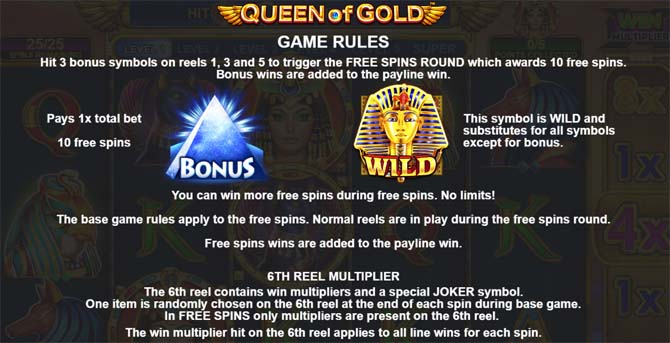 It can only appear on reels 1, 3 and 5, and in order to benefit from it, you will need to land all three during a spin. Following this, you will receive a total of 10 freespins. During the freespins feature, you can also benefit from the 6th reel with all the multipliers on it. And in addition to that, the Joker symbol will be removed from that reel throughout the duration of the feature. What’s more, you can also retrigger the feature an unlimited number of times! You will again need to land all three Bonus symbols in order to add another 10 freespins to the ones you already have.

Note also that there are several levels of multipliers here, where on the first one they range from 2x to 10x. You can level up by landing a Cleopatra symbol in the position with a circle in it. You will need to land 5 of them within 25 spins, in order to move on to the next level.

Queen of Gold is a very attractive slot game and not just visually. The opportunity of gaining multipliers of up to 100x your stake is just about as appealing as any. And add that to the freespins feature – priceless.