Paydirt is a slot machine by software provider RTG. The theme in this offering is that of gold mining, and it takes you back to the Wild West. And with that in mind, it has all the most traditional imagery present. For one, let’s first have a look at the backdrop of the base game. It pictures the countryside, with what appears to be a very small settling. Little picket fences separate the homes from the small water towers, and beyond that it’s just endless pine forests and mountains. But if you head over to the paytables for reference, you will notice the backdrop there tells a whole different story. You will find yourself in the tunnel of a gold mine, with cobwebs on the sides. There’s not much else in sight but a big black nothingness ahead. The graphics quality here isn’t the greatest, but it has a fun cartoonish feel to it. 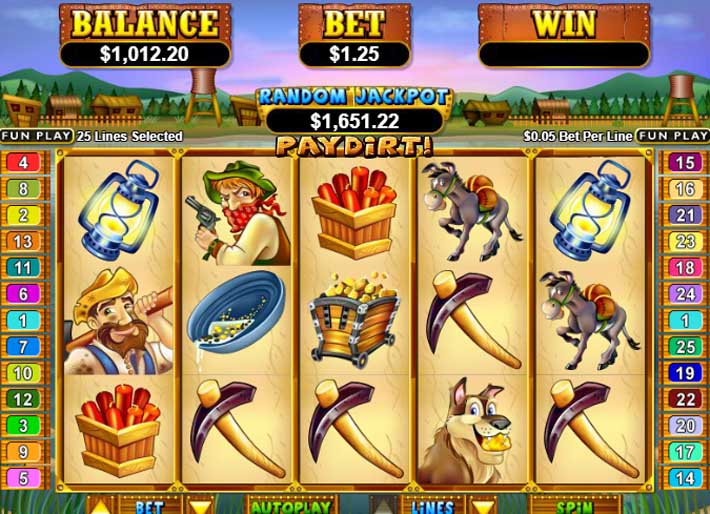 That fun vibe is enhanced by the symbols on these reels. And they start off with the lower value icons depicting mining gear. First in line is the oil lamp, following which we have the pickaxe and a gold sifting pan. Next is a box of dynamite, after which is the symbol of a wolf clenching a gold nugget in its jaws. Then there’s the donkey symbol, which appears to be backing away from something. And in the same value range is also a wagon filled all the way to the top with gold nuggets. This brings us to the higher value icons on these reels. The first of them would be the bandit, with a scarf covering his face. After that comes the miner, looking tired but happy. And finally is the gold mine itself as the most valuable symbol on these reels. Now as for the game’s layout, it features the most common 5 reel by 3 row grid. On it are 25 available paylines in total, whereas these are flexible and you can adjust them to fit your preferences. Therefore, stakes here start at a minimum amount of just 1c per single spin. And they range up to a maximum of $6.25 per spin.

Keep an eye out for the Gold Nugget symbol, as it acts as the game’s Wild. And as such, it will be able to replace any of the regular symbols here to help complete winning combos. That way you can count on a higher winning potential and more prizes. However, it does not substitute for the Scatter symbol. And in addition to that, the Wild doesn’t offer any payouts of its own. But as if that weren’t enough, it doesn’t appear just about anywhere on the reels either. Instead, it can only land on the reels 2 and 4. On a brighter note, though, the Wild symbol can triple your payouts for winning combinations that it becomes a part of.

The bigger attraction on these reels, however, is the game’s Scatter. It comes in the form of a sign that says ‘Paydirt!’ and can land in any position, anywhere on the reels. The payouts it offers are rather insignificant, but it can trigger one of three special features. In order for this to take place, though, you will need to land 3 or more Scatters during the same spin. As a result, you will enter a pick me game, where you will need to select one of the three Paydirt signs. This will, in turn, reveal the special features you have activated. 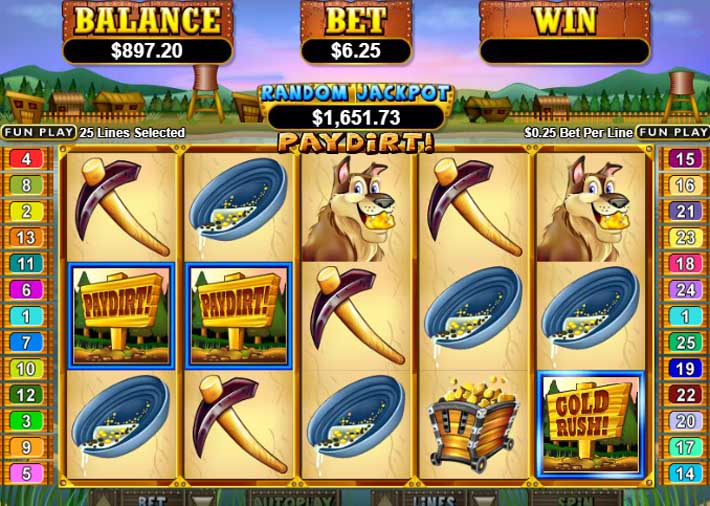 One can be the Gold Rush feature, which will award you a total of 12 freespins. And throughout their duration, the Wild symbol will be able to land on any of the five reels. Landing another 3 or more Scatters during this round will award you an additional 12 freespins. Then there’s also the Gold Fever feature, which will give you 5 freespins. And during these freespins, reel 3 will be completely covered in Wild symbols. You can retrigger this feature just the same way as above and receive another 5 freespins on top. 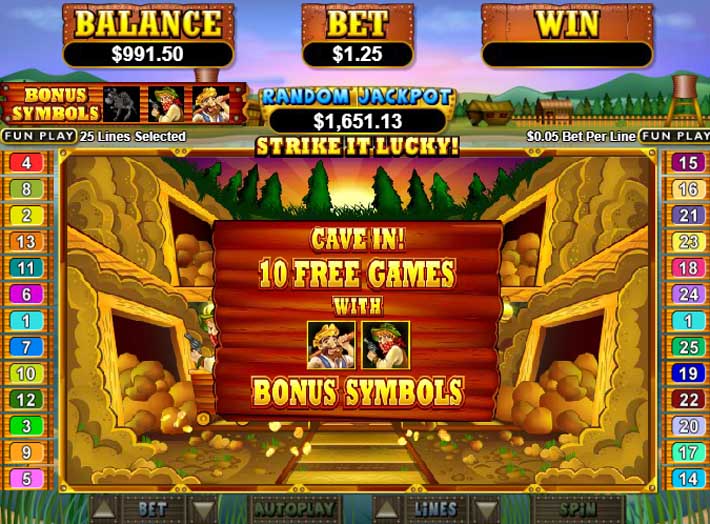 And last but not least is the Strike it Lucky special feature. Before it begins, you will need to pick one of the five gold mines on the screen. It will reveal to you your Bonus symbol, after which you will receive 10 freespins. And all throughout the duration of the freespins, any time the Bonus symbol appears, a Wild will takes its place.

Paydirt is a fun online slot game, there’s no argument about it. Furthermore, it offers not one, but three whole different special features. And that’s not very common with games by this developer. More importantly, though, these can also be very rewarding, especially thanks to the Wild’s 3x multiplier. And it also helps that the theme is a likable one, and the developers have dressed it up in fun, entertaining visuals.