Rainbow Ryan is an Irish luck themed online slot game by slot games developer Yggdrasil. But it’s not your typical Irish luck theme, mind you. The mischievous leprechaun here certainly has developed a more sophisticated sense of style and he has also turned to becoming a rock star, as well. You will see him appear on the screen, playing an oddly shaped guitar and wearing a pair of round shades. Notice that the backdrop is also fully in tune with the whole rock star idea. As a matter of fact, the reels form a giant stage, sandwiched between two pillars of speakers. And if you’re a fan of the heavier side of the musical spectrum – then you’re certainly in luck. The developers here have included some distorted guitar to enhance the overall vibe. And we have to say they’ve done a pretty good job. 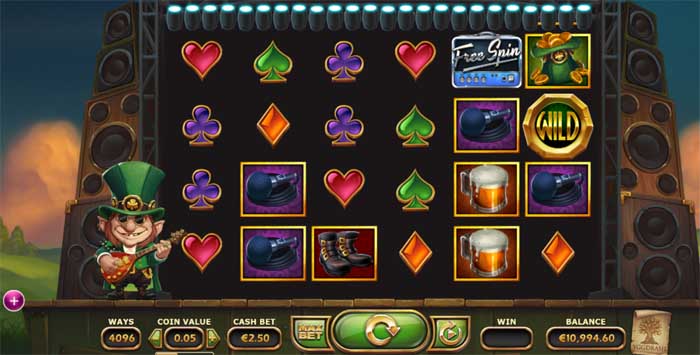 As for the symbols in this slot game, there aren’t too many of them. As a matter of fact, there are only 8 regular symbols here in total. And they start with the lower value playing card suits, each in the form of a gemstone and gold frame. The symbols include the clubs, diamonds, hearts and spades. Following them, we have the higher value pint of beer, a microphone, and a pair of boots. And last but not least, the highest paying symbol is the one depicting a bag of gold coins. Now, let’s have a closer look at the game’s layout. It’s actually rather unusual, if you compare to the majority of other slots out there. There are 6 reels and 4 rows, with a whopping 4096 ways to win! Obviously, the paylines are fixed, so you can’t adjust anything here. As for the betting amounts, they start reasonably low and have a solid maximum. Stakes span from only 10p per single spin up to the total of £100 per spin. And the RTP is also quite tolerable at 96.30%.

Let’s first begin by introducing this slot game’s Wild symbol. You can miss it, as it comes in gold and green and has the word ‘Wild’ on it. It can appear in any position on the reels, replacing any of the other symbols. That way you can count on potentially better winning opportunities. However, there’s one symbol that the Wild cannot substitute for and that’s the game’s Freespins icon. But before we get into the freespins feature, there’s another feature we need to describe. 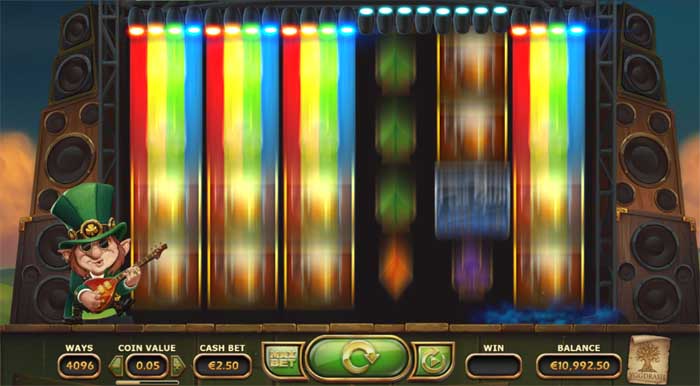 Rainbow Ryan boasts a Rainbow Reels special feature, which the leprechaun triggers at random, at any point during the game. Note also that the leprechaun’s stage name is Ryan, so that’s how we will be referring to him. So, when the feature becomes active, Ryan will sync anywhere from two to all six reels. This means that these reels will begin to display the exact same symbol. And that, in turn, means you can potentially land even higher paying winning combinations. That’s especially true if you happen to land one of the higher value symbols on these synced reels. 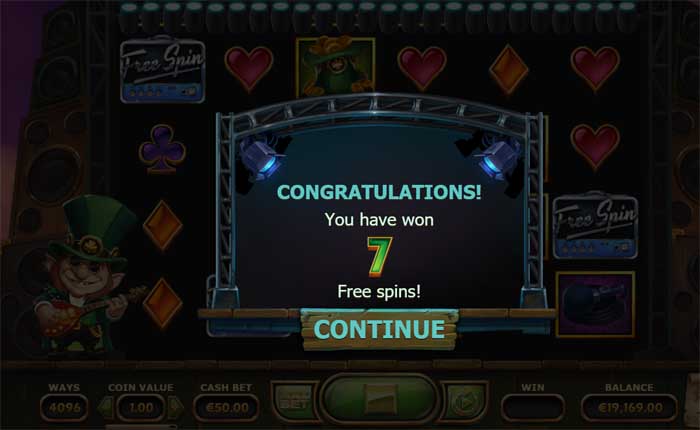 But now for the major attraction: the freespins bonus round. As we already made it clear, there’s a special symbol that will help you trigger this feature. If you land a minimum of 3 Freespins bonus symbols, you will activate it and receive the minimum of 7 freespins. The more bonus symbols you land, the higher your freespins count will be. Thus, 4 and 5 Freespins symbols will award you 10 and 15 freespins, respectively. And the most you can count on is 20 freespins for landing 6 bonus symbols at the same time. But what’s more, you will also get to benefit from the Rainbow Reels feature indefinitely all throughout the freespins round!

To be clearer, for every freespin, you will have at least 2 synced Rainbow reels. And from there that number cannot decrease! On the contrary, it can only grow, so you can potentially have all reels synced, which could result in some pretty massive winning opportunities. This will especially be the case if you manage to get 3 or 4 synced reels already during the very first freespins. And if you managed to land a higher number of those to begin with, just sit back and prepare to pocket some handsome prizes.

Rainbow Ryan is certainly a really cool, fast paced and fun online slot game. We enjoyed the new take on the rather old and boring (by now) theme. And it was interesting to see the notorious leprechaun put on a new look for a change. But besides that, there’s really plenty going on in this game. There are two main features that can prove exceptionally lucrative and the medium to high variance here will make sure of that. But with the same in mind, don’t expect the freespins round to present itself that easy to you.