Shangri La is an online slot game brought to us by software provider NextGen Gaming. To those not familiar with the name, Shangri La is actually a fictional place. It was introduced to readers by James Hilton in his 1933 novel Lost Horizon. This place has become synonymous with paradise on Earth and, according to the book, is located somewhere in the Himalayas. So, now you have the background and the setting of this online slot game should make more sense. First off, we should point out the incredible quality of the graphics and visuals here. The backdrop features this magical, mystical land with a large temple and waterfalls surrounding it. In the distance you can make out the snow-covered mountains. There’s also a very atmospheric soundtrack playing, which just enhances the whole majesty of the scenery. 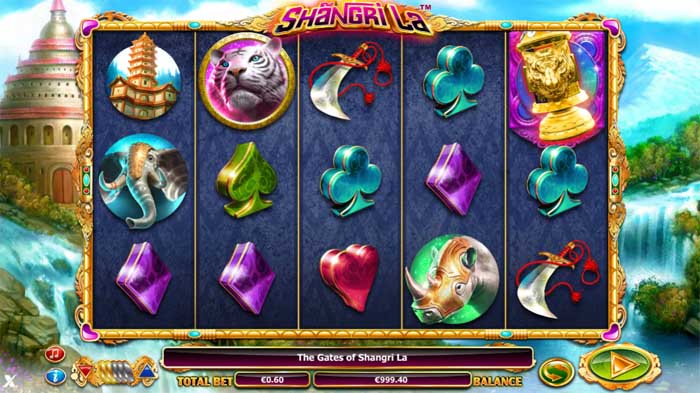 Moving on to the symbols, the splendor of it all continues. First we have the exquisitely designed lower value playing card suit icons. These are the diamonds, clubs, hearts and spades. Following them and increasing in value, we have the sword symbol with a curved blade. Then there’s a beautiful pink water lotus flower. After that we have a symbol depicting a tall traditional building. Then, making our way to the higher value symbol in this game, we have an elephant wearing something like a golden helmet. Next is a rhino that is also wearing something similar, perhaps more reminiscent of a mask. And at last we have the magnificent tiger. This is the highest paying symbol, offering prizes of up to 500 coins. This brings us to the layout of the game, which features 5 reels and 3 rows, with a total of 15 paylines. These, however, are fixed, so won’t be able to regulate them. As for the available betting amounts, they range from 20p per spin up to the maximum of £40 per single spin. The RTP here is also pretty decent at approximately 96.63%.

Shangri La isn’t just any paradise; it’s a features paradise, too. There are plenty of extras to enjoy in this title. But let’s first begin by introducing the game’s Wild. It comes in the form of a young woman and can appear only on the middle reels 2, 3 and 4. The wild symbol will substitute any of the other symbols on the screen. This means that you can count on better winning opportunities. And better yet, for any winning combination that the Wild takes part in, she will also double the payouts from that win. That’s right, there’s a 2x multiplier on all Wild wins. And on top of that, you can also randomly gain additional Wilds on the reels at any point during the game. And last but not least, the Wilds can also turn their entire reels wild when they appear on the screen. However, the Wild symbol doesn’t exactly boast any payouts of its own. There’s also one exception as to the symbols it will be able to replace and that is the Scatter symbol. 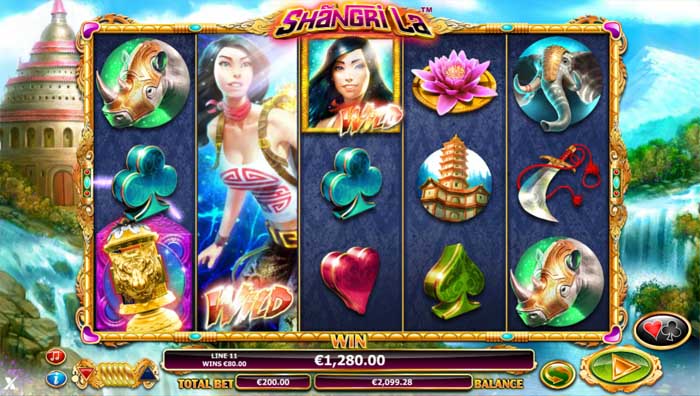 The Scatter symbol, in turn, is the most lucrative symbol on the reels, offering prizes of up to a whopping 3,000 coins. It comes in the form of a gold statue and will be able to trigger the Feature. In order for that to happen, though, you need to land a minimum of 3 Scatters at the same time. As a result, you will enter a new screen with a wheel of fortune. Spin it, and it will reveal to you one of four bonuses you will get. 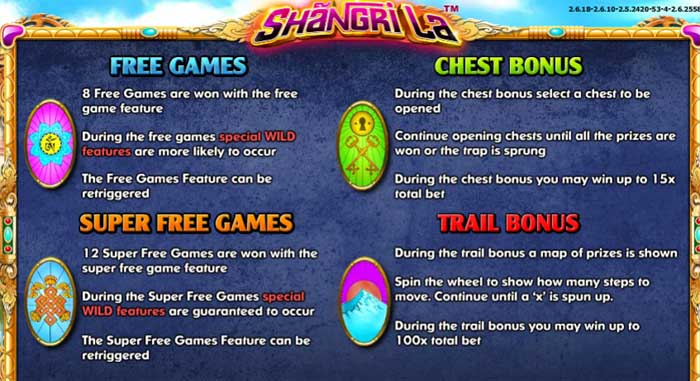 The available options include freespins, where you will receive a total of 8 freespins. During this round, the Wild features will be more likely to occur and you can also retrigger it. Then there’s the Chest Bonus feature, where you will need to pick chests until you’ve gotten all the prizes or until you spring a trap. You can win up to 15x your stake during this round. Next is the Super Freespsins feature, awarding you 12 freespins. Here, you will be guaranteed to experience Wild features and you can also retrigger the freespins. Then last but not least we have the Trail Bonus, where you will make your way across a treasure map, collecting prizes as you go. This feature can provide you with a total of up 100x your stake.

As you can see, there really is plenty in store for players to take advantage of. There are 3 features in the base game alone, and another four in the bonus round. In addition, you can also trigger those at fairly decent intervals. Sure, it’s not the most rewarding online slot game in terms of the payouts, but you can still score pretty nicely. And in addition to that, you have a very pleasant exotic theme to enjoy. As far as the variance here goes, we’d put it in the medium range.