Shaolin Spin is an online slot created by developer iSoftbet. As you can already guess from the title, the theme here is clearly Chinese and you can count on a lot of traditional sounds and visuals. There’s some characteristic music to support the vibe, though it does have an oddly modern touch. We’re not quite sure how that makes us feel. But there’s always the option of muting the sound for those who have made up their minds. For those who have ever even heard of the term shaolin, the term obviously has to do with kung fu. And as a matter of fact, shaolin kung fu happens to also be among the oldest and most famous Chinese martial arts. So prepare to meet your elderly kung fu master and engage in some Yin and Yang gameplay. The rather subdued very dark, dark red backdrop will allow you to focus better on the brighter contrasting symbols on the reels. 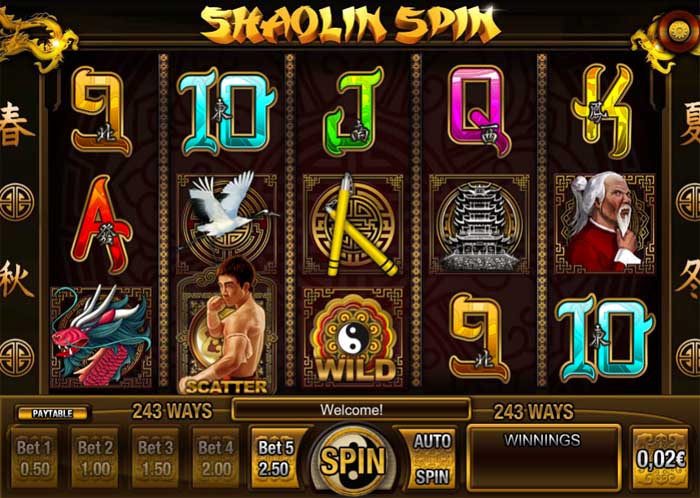 Speaking of those, they include the lower value playing card icons. Each is neatly styled to fit in with the theme, accompanied by Chinese hieroglyphs. The symbols present are A, K, Q, J, 10 and 9. Following them, we have the higher value icons. First in line are the symbols depicting a crane and a pair of nunchakus. Then there’s a tall temple, following which is the grey-heard master, stroking his long beard. And then at last but not least, we have the most lucrative symbol on these reels – the dragon icon. It can award up to 20 times your total stake. The layout in Shaolin Spin will be familiar to most, featuring 5 reels and 3 rows with 243 ways to win. Obviously, those are fixed. Stakes here, however, have a rather humble range and span from 25p per spin up to the maximum of only £12.50 per single spin. We must say that the RTP is refreshingly high, with a long term theoretical RTP of 97.15%.

This slot features a Wild symbol in the form of a Yin Yang symbol. The Wild doesn’t offer any payouts of its own. But it will readily be able to substitute for any of the other symbols on the reels. Thus, you can count on it to help you create better winning opportunities throughout gameplay. However, the Wild will not be able to replace the game’s Scatter. In addition, it can only appear on the three rightmost reels: 3, 4 and 5. But better yet, the Wild can also expand in the shape of a cross. As a result, you can benefit from up to 4 extra Wilds whenever you land only one during a spin. Hence, this makes for even better winning possibilities. 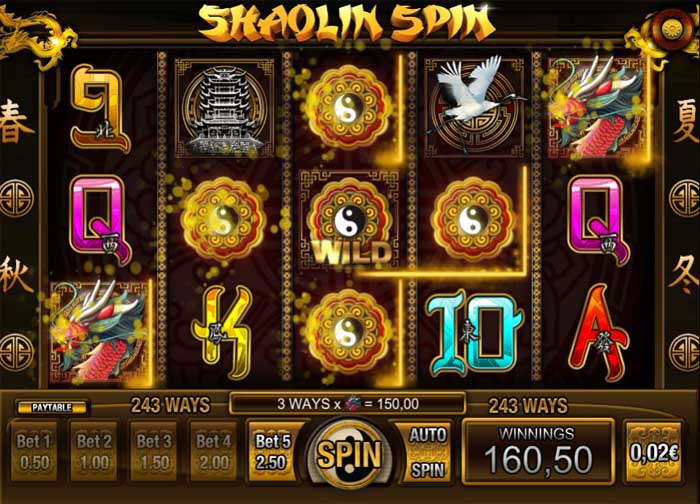 As for the Scatter symbol, it depicts a young kung fu warrior, who is clearly in the middle of training. Unlike the Wild, though, it can land in pretty much any position, anywhere on the five reels. But in order to benefit from it, you will be looking to land at least 3 of these symbols all at the same time. This will result in a cash prize and a certain number of freespins, depending on the number of Scatter symbols you landed during that spin. Thus, 3 Scatters will award you 4x your total bet and 10 freespins. If you land 4 Scatter symbols, then you can count on receiving a total of 6x your stake and 15 freespins. Finally, landing the maximum of 5 Scatter symbols all at once will award you a total of 20 freespins and a cash prize of 10x times your total stake. 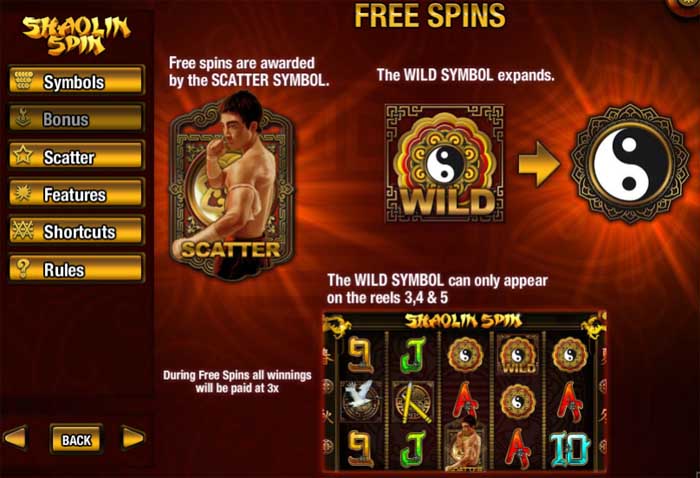 The highlight of the freespins feature, however, is the fact that all winnings will be subject to a 3x multiplier. That, together with the expanding Wilds feature can certainly prove to be pretty lucrative. As a matter of fact, the highest amount you can gain in this slot game per spin is 2,500 coins. Needless to say, you can only score wins like that during the game’s freespins bonus round. However, this just about covers the amount of special features that Shaolin Spin has to offer. So there are no other bonuses like pick me games, cash trails or similar. In that sense, the developers have taken a rather simplistic approach to the setup and overall structure of this slot game. But that’s not at all a bad thing.

Shaolin Spin, as we have already concluded, features a rather simplistic and straightforward setup. With only one real special feature and the expanding Wild to aid it, what else do you really need? The graphics are pretty decent, and the theme is a fairly popular one. In addition, this is a low to medium variance title, so this amount of features, in our opinion, is only appropriate. The high RTP is also a very nice touch, and it gives you a better odds in the long run.