Snowflakes is about as revealing a title as they come. This slot game is produced by one of the most well-known software developers out there – Nextgen Gaming. The backdrop features a wintery night sky, with a snowy blanket covering the surface and sprawling as far as the eye can see. The soundtrack offers the same dream-like feel, as do the reels themselves. And speaking of the reels – their whole beauty is in the fact that you can’t see them. That means you will have a better opportunity to look at the brilliant backdrop. The symbols on the invisible reels are also a treat to look at and perfectly fit in with the whole atmosphere that the design and soundtrack achieve. They are all different snowflakes, which you can distinguish by size and hue. For example, the lower value ones are smaller in size and there are only four of them. The rest include six different colored larger snowflakes.

As for the setup, it features the customary 5 reels and 3 rows, with a grand total of 25 paylines. You will notice that there’s no option to adjust them, however, you can regulate your wager amount. Stakes can span from 30p per spin all the way up to a whopping £600 per spin. The RTP is also relatively satisfying at the mark of around 96.57%.

The Wild symbol in Snowflakes comes in shape of a block of ice and the word ‘Wild’ carved in it. It can appear in any position on the reels and can stand in for any of the snowflake symbols to contribute towards winning sequences. It also offers the second highest payouts on these reels of up to 400 coins. The highest paying symbol, however, and also the only one for which the Wild cannot substitute is the Scatter symbol.

The Scatter offers an immense 2,500 coins for landing 5 anywhere on the reels. It comes in the form of an icy sphere and is responsible for triggering the Frozen Wilds freespins feature. In order to activate it, you will need to land at least 3 Scatters anywhere on the reels. Their exact number will also determine the amount of freespins you receive. Thus, 3 Scatters will get you 7 freespins, whereas 4 and 5 Scatters will give you 10 and 15 freespins. But what makes this feature all the more special is that any Wilds that you land will become static symbols for the remainder of the freespins. What’s more, you can also retrigger the bonus round for even more freespins!

This game also boasts two random features, one of which is the Icy Wild feature, during which up to 5 symbols on the reels may become Wild. The other one is the Wild Wind feature, where up to 5 Wild symbols can appear on the reels. 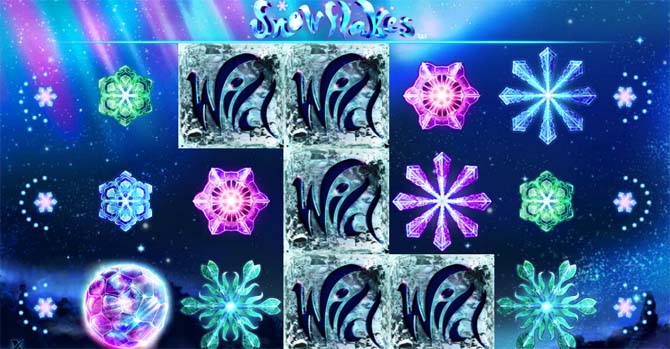 Snowflakes is as rewarding visually as it is in terms of gameplay. The different features are sure to provide just the right amount of entertainment and winning opportunities. We really like the fact that the wilds “freeze” in place in the free spins feature, giving the feature a great potential for big wins. If you lock in a lot of wilds early in the free spins feature, you are almost guaranteed a big win, so this is what you are hoping for when you play Snowflakes. The base game can be a bit dull, but the free spins feature is what makes this slot fun to play.