Sugar Parade is an online slot game by software manufacturer Microgaming. As you can tell from the title, this game is all about sweets, candy and every form of sugary delights you can imagine. The backdrop depicts a magical world of fields and snow-capped mountains, with a rainbow in the far distance. But if you look closer and pay attention, you’ll realize the snow is really just more sugar and frosting. And the reels here appear to be lined with strips of bubble gum. There’s a really lively soundtrack playing in the background, too. And it really helps bring about the atmosphere of a parade. You just feel like breaking into a triumphant march when listening to it. What’s more, there are some appropriate animated sequences in this slot game, especially to mark winning combos. Some of the symbols genuinely go wild on the reels. 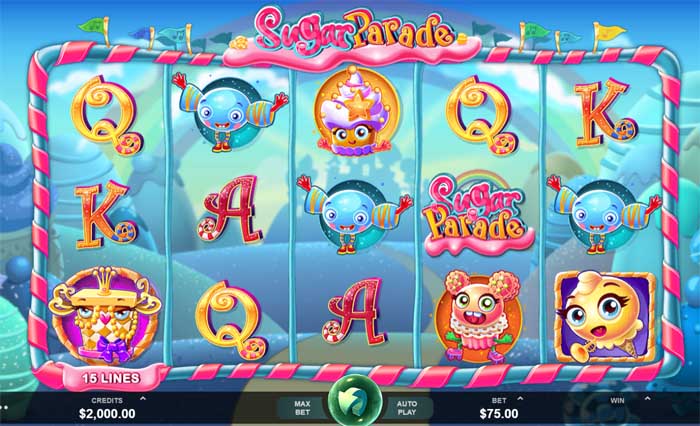 And speaking of those, they start off with the lower value playing card icons. These are only Ace, King and Queen. But they’re at least very neatly styled, with lollipops and a fitting quirky font. Following them, we have the higher value icons that might be a bit of a fuss to describe. They’re all different character symbols, composed of sweets of all kinds. First we have the blue candy, after which we have the overly happy-looking green ice cream cone. Then there’s an orange cupcake with a massive crown of frosting. And finally, the two most lucrative symbols of the lot are the hyperactive pink cupcake on rollerblades and the friendly yellow cake. The layout in Sugar Parade is pretty straightforward, featuring the regular grid of 5 reels and 3 rows. And there are 15 paylines here in total, but they are also fixed. So adjustments in this part of the game won’t be possible. Players will be pleased to know that the betting range is rather flexible, though. Wager amounts spam from 15p per single spin up to a total of £75 per spin. And the RTP is at a solid average of 96.56%.

One of the symbols you will want to be on the lookout for in this online slot game is the logo icon. It is by far the highest paying symbol on these reels, and it also happens to double as a Wild. Thus, it will be able to replace almost all of the other symbols in this game to help you land better winning combos. The only exceptions to this rule are the Scatter and Bonus symbols. Note also that the Wild can appear in any position, anywhere on the reels. And what’s more, it can even offer you payouts already for landing only 2 of these symbols on a payline.

Now, as for the game’s Scatter, it pictures a rather oversized yellow ice cream scoop on a very small cone. Just like the Wild it can also appear anywhere on the reels, and it will also offer payouts for landing as few as only 2 during a spin. However, its more important role here is its ability to trigger one of the two special features – the freespins bonus round. Landing a minimum of 3 Scatter symbols in any position during a spin will award you a total of 10 freespins. And on top of that, you will also get to benefit from a 3x multiplier on all your freespins winnings! You can also retrigger the feature and gain an additional 10 freespins. All you need to do is land another 3 or more Scatter symbols simultaneously on the same spin. 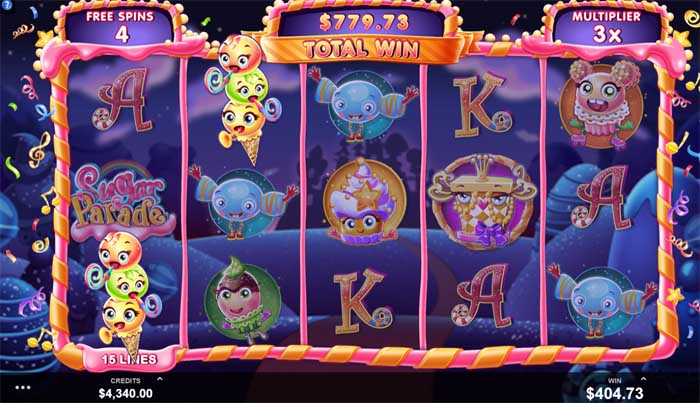 But in addition to the above, Sugar Parade also has one more special symbol and a special feature to go along with it. The Bonus symbol can appear in any position, anywhere on the reels. And while it doesn’t offer payouts the way that the other symbols do, it can still prove fairly rewarding. You will be looking to land at least 3 of these symbols in a line, starting from the 1st reel. This will trigger the Bonus game, where you will need to pick from a selection of 12 prizes. The number of picks you get will correspond to the number of Bonus symbols you landed. So, 3, 4 or 5 Bonus icons will grant you 3, 4 or 5 picks, respectively. The more picks you get, the higher your potential cash prize can be. 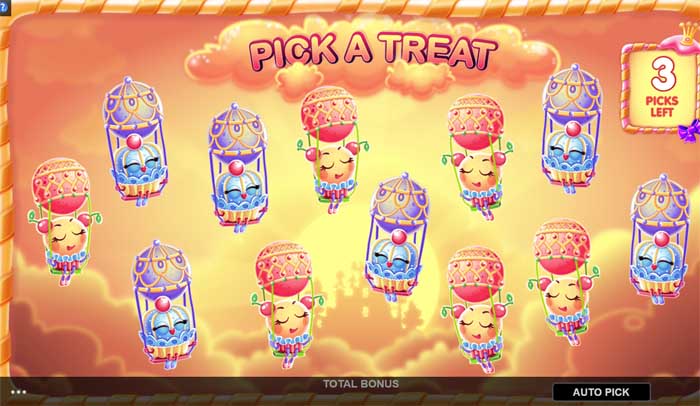 Sugar Parade is very bright and colorful and there’s this constant bombardment of music and visuals all throughout gameplay. Nevertheless, gameplay itself is really quite simple and straightforward. And you will also get a chance to experience the different features at more than decent intervals. This is a low to medium variance title, so don’t expect to land extremely large wins. But the freespins can prove to be very satisfyingly rewarding, with a possibility of pocketing up to 1,658 times your total stake from just a single spin.