Imperial Dragon centers on a very typical for slot games theme of China and the Far East. This Blueprint Gaming slot pictures a compelling backdrop of an old Chinese city, covered by the mist of early morning. A few branches of blossoming trees overlook the reels and the soundtrack is a mixture of very subtle sounds of wind chimes and some characteristic Chinese music. As for the symbols, they include the standard lower value playing card symbols: A, K, Q, J and 10. The symbols aren’t styled to match the theme, however, which we think is a shame. As for the rest of symbols, they all picture very traditional Eastern imagery, such as handheld fans and gold coins. In addition, you will see red lanterns, the characteristic Chinese buildings and a guardian lion.

The Setup of Imperial Dragon is fairly standard, featuring 5 reels and 3 rows with a total of 20 paylines. The paylines are not subject to adjustment, but you will have a pretty flexible stake range starting with 20p per spin and reaching up to £100 per spin. The RTP is set at 95.53%.

The Wild symbol is also the highest paying symbol on these reels, offering payouts of up to a whopping 20,000x your line bet. It comes in the form of none other than the Imperial Dragon itself. What’s more, it can appear in any position on the reels and replace any of the regular symbols. However, the only symbol that it cannot substitute for is the Scatter. 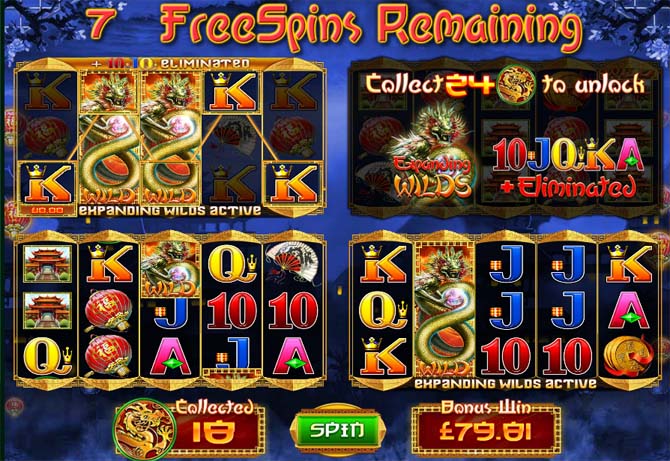 The Scatter, in turn, is what you will be looking to land in order to trigger the Golden Dragon Bonus. More precisely, you will need to land at least three of these symbols anywhere on the reels. And the more you land, the more rewarding this freespins bonus feature will be. Thus, 3 Scatters will grant you 15 freespins, whereas 4 and 5 Scatter symbols will give you 20 and 50 freespins, respectively. Furthermore, throughout the duration of the feature, you will be collecting any Golden Dragon symbols that appear on the reels. They will go into a panel that you will see just under the reels. 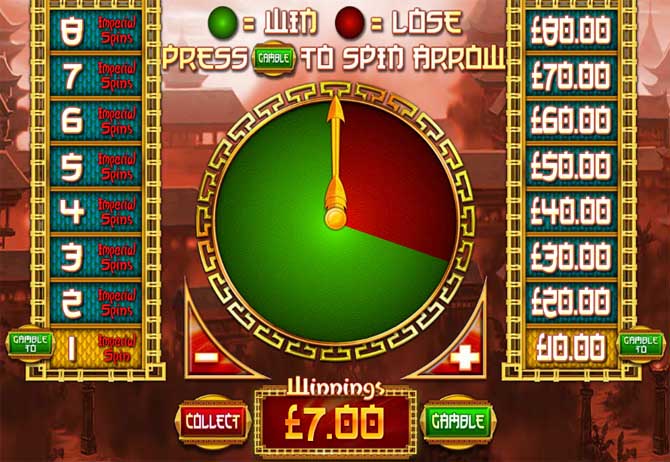 Imperial Dragon is a surprisingly rewarding slot game, considering the very generous bonus round. In addition, this slot also has a Gamble feature, in which you can gamble your way to a massive 100 imperial free spins. Quite unlikely, but it can happen. If you don’t wan’t to aim for the 100 free spins, you can cash out a lower amount of empirial spins along the way as you win the gambles. The bigger the win you gamble, the higher the probability is for you to win the gamble. The Imperial free spins are a really innovative and fun feature, which also holds a great potential for big wins. All things considered, it is easy to understand why this slot machine is so popular amongst slot players. The bonus features are unique, the game play is smooth and the sounds and graphics are very well made. Imperial Dragon is another great release from Blueprint Gaming and we would recommend you to try it out at one of our recommended casinos who offer Blueprint games.