Once again, our planet is in need of heroes to save the day (and win us some money along the way). To be honest, from graphics to soundtrack, and from base game to bonus rounds, Yggdrasil’s Super Hero slot has it all. Even the user interface and paytable are nicely executed, and more importantly, clearly understandable.

Cut to the bone, Super Heroes is a game with 5 reels, three rows and 20 paylines. The max bet is 20 coins per spin, one per line. Given that coin the value ranges from 1p to £5, which amounts to a mx stake of £100 per spin. The RTP is decent, 96.1%, which means the house edge is mere 3.9%. The slot it self is medium to high range in terms of volatility.

The basic symbols are what seem to be space-era iterations of card suits – blue for diamonds, green for spades, red for hearts and purple for clubs. There are also four high-paying symbols in the likes of comic book villains (with some nicely executed, sinister looking animations that activate on winning spins), as well as two special symbols, the wild and scatter. The wild reads “wild”, and scatter reads “free spins”, which goes a long way to making the game easily understandable even to non-punters. Naturally, the wild substitutes any symbol except for scatter. 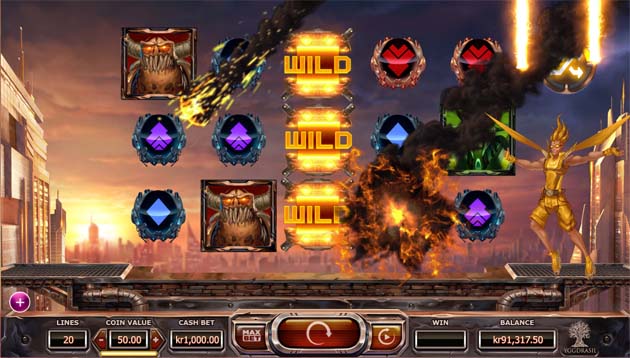 There are six heroes, each of whom has their own set of powers (slot bonuses) – Hopper, Knox, Mirage, Racen, Tesla and Trance. They appear in the Super Hero feature, where they are summoned on either side of the reels to work in pairs (well, one after the other, really, but you get gist). In short, this is how each of them will help you:

Hopper will summon a meteor shower to turn various random symbols into wilds, landing you up to five of these anywhere on the reels.

Knox will hadouken a beam of fire into the total win of the special feature, multiplying it up to five times.

Mirage uses magic to turn every high-paying symbol sitting on the reels into a die. The dice will then spin, revealing random amounts of coin until a mystery win is awarded. This win may vary anywhere from 5 to 1,000 coins.

Raven will throw a spinning blade (how appropriate), which can turn up to four reels into wild reels; it’s basically like stacking wilds.

Tesla will create an impact wave that’ll change anywhere from two to five symbols into other symbols that will complete a winning combo – essentially, an expanding wild.

Trance will conjure up a portal that’ll award you up to four extra spins.

It’s important to keep in mind that these superhero features will activate randomly on any spin during the base game. On the other hand, every freespin will have it, and the way to activate freespins is by landing at least three scatters. Landing three scatters gives you four freespins, four scatters equals five freespins, and landing five scatters triggers seven freespins.

The heroes are assigned a level between one and four, which will be random during the base game, but start from one and increase with each spin during the freespin round. The idea is – the greater the level, the more power the hero wields. 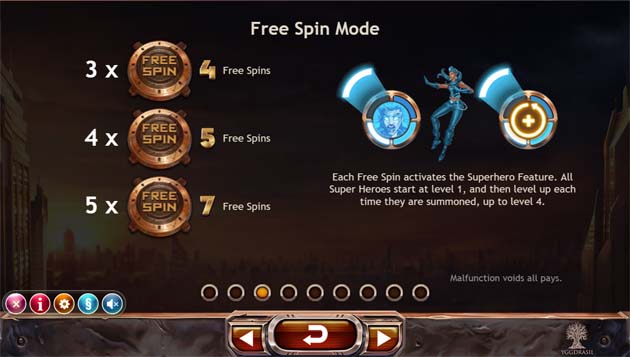 All things considered, Super Heroes is certain to attract lots of players for years to come. It has everything one might want from a slot – decent RTP, great bonus rounds, excellent graphics and animations, and, best of all, high entertainment value.