Troll Hunters is an entertaining slot game by provider Play’n GO. The slot centers on Norse mythology and features three characters, who are in fact the troll hunters. And you get to meet their prey, as well – the troll himself. In Scandinavian folklore, trolls are large, treasure hording creatures, related to giants, who are often harmful to humans. The reels also showcase a variety of different Viking weapons, such as an axe with beautiful ornaments, a hammer and a sword. Other symbols include a shield, helmet, wrist protectors, a lantern, as well as skull drinking cups and earrings. And apart from offering pretty decent graphics, this game has a number of interesting animated features to show.

The layout of Troll Hunters features 5 reels and a somewhat unconventional 5 rows. This is a medium-variance slot game with a relatively high RTP or 96.73%. Players can start betting already with as little as 20p per spin and increase that up to £100 per spin.

The main attraction of this Play’n GO slot machine is its freespins bonus feature. Now, you may notice that gameplay here is a bit different than with most other games. For example, there are no paylines, on which you need to land symbols of the same kind to win. Instead, you need to land at least three of a kind either horizontally or vertically. When you do form a winning combo, the symbols from it disappear and make way for the icons above them.

To trigger the special feature, however, you will need to clear the bonus reel completely. You will notice as the symbols move around that some of the reels have the letters B.O.N.U.S. on them. Revealing the whole word will activate the freespins feature, awarding you a total of 10 freespins. 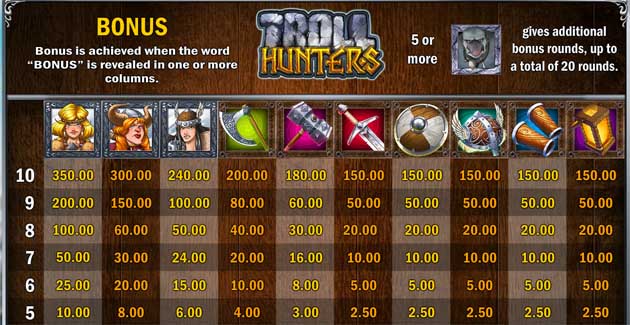 After this, a new screen will appear, with the giant troll standing right beside the new set of reels. Here, yet another set of rules applies. To win, you will need to land 5 matching symbols anywhere on the reels. Here, you will be looking out for the troll symbol. If you can land 5 of him on the reels, it will award you with an extra 5 freespins. This way you have the possibility of gaining a total of 20 freespins at a time.

And if you can clear the screen of all the symbols, then you will score a whopping 500 times your stake!

All in all, Troll Hunters is fun and entertaining slot game. Play’n GO is known for delivering pretty good graphics, and it hasn’t let its fans down from that point of view. There isn’t a real abundance of bonus features, but they are relatively unique and fairly lucrative. With a RTP of 96.73%, it is one of the better slots out there in terms of value.