Wizard of Oz – Road to Emerald City is an online slot game by software provider WMS that’s based on a dearly beloved theme. If you haven’t automatically started hearing one of the songs from the 1939 film in your head after so much as reading the title, you might be in need of re-watching it. For those, who still clearly remember this classic, you will be pleased to see all your favorite characters on the screen. Seven of them line the top of the reels and they even include Dorothy’s dog Toto! The backdrop takes you directly to the magical realm, with the yellow brick road in the foreground. And all around it are endless fields of pink flowers, beyond which is the Emerald City. In addition, you will also get to enjoy the jolly soundtrack from the film playing in the background as you spin the reels. 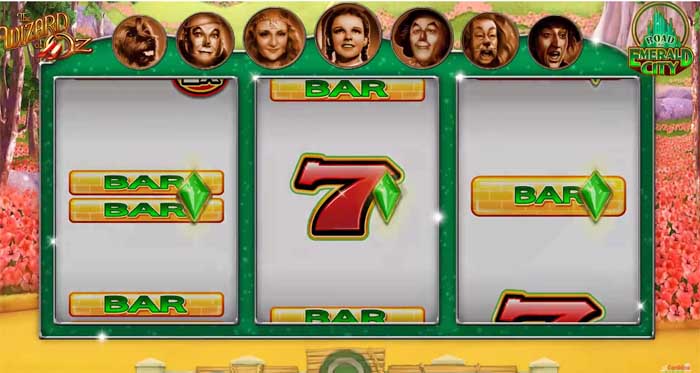 The symbols in this slot mainly pay tribute to the classic slot machine icons. First in line are the lower value BAR symbols. They come in single, double and triple BAR forms. In addition, you can also form winning combos with any three of these. But increasing in value, we have another traditional symbol – the red lucky number 7. Following this, we have a symbol depicting the whole crew standing before the Emerald City. As for the layout here, it’s quite basic and is in line with the retro slot machine theme. There are only 3 reels and 3 rows, with a total of 9 available paylines. The paylines here are fixed, though, so you won’t have the option of regulating them in any way. With this in mind, stakes here might come across as rather steep. The minimum amount you will be able to wager on these reels is 35p per single spin. And the largest amount you can bet per spin in this online slot game is £70. The RTP in this online slot is at a long term average of exactly 96%.

For being a seemingly basic and simplistic slot game, this game actually has a number of extras on offer. In the base game you will notice the logo symbol is the very most valuable icon. But it also happens to act as a Wild, replacing any of the other icons, except only for the 2x multiplier and the Emerald icon. However, the symbol showing Dorothy and her friends also acts as a Wild symbol and can appear in any position on the reels. But it will only be able to replace all icons except for the game logo, the 2x multiplier and the Emerald.

This 2x multiplier can appear on any of the other symbols at random. As for the Emerald icon, here it plays the role of a Bonus/ Scatter symbol. You will really want to find this one, as landing three or four of them on the reels will activate one of seven different bonuses. The difference is that 3 Scatters will simply activate the bonus. And four will offer a cash prize worth 3x your stake in addition to activating the bonus.

First we have Dorothy’s freespins feature, which will award you anywhere between five and twenty freespins. If you triggered this round with 4 Emeralds, you can continue to collect them during the bonus. Gathering 3 of them will trigger a further feature. Another bonus – Glinda the Good Witch Booster will give you an additional money prize or multiplier on your win. Then there’s also the Scarecrow Crow Prizes bonus feature, where one, two or three crows will land. The first one awards a cash prize, whereas the next two can either generate a money prize, or a winning multiplier instead.

Another feature you can trigger is the Cowardly Lion Multipliers, which in turn will reward you with a single freespin. Reel one will only display multiplier values from 1x to 25x for this feature. And in addition to that the Emerald will also take on the role of a Wild. Then there’s also the Wicked Witch freespins feature, where the Wild Witch will cover reel 1. This feature gives you 3 freespins with Sticky Wilds.

Simple slot game, huh? Who would have thought it has this many special features to surprise you with. It may certainly seem like a lot to wrap your head around. But once you start playing it won’t be long before you get the full hang of it. This slot is a medium variance slot game, but with massive winning opportunities during some of the bonus rounds. As a matter of fact, you can potentially pocket up to a staggering 3,571 times your wager.