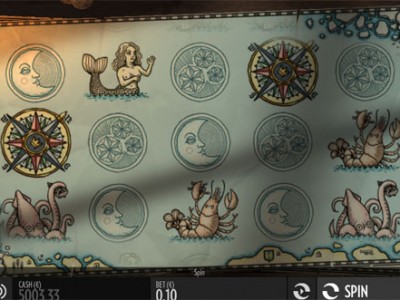 For the explorer in you, Thunderkick brings you a beautifully designed game called 1429 Uncharted Seas. With this one, you’re set to sail around the world at a time when discovering and exploring new lands and oceans was at its peak. The reels in this game are presented on a map, and are filled with various angry-looking sea animals, such as a spiny tortoise, a ferocious sea slug and a warped octopus. In addition, you’ll find icons of the sun, moon and stars.

1429 Uncharted Seas provides a five reel and three row layout for players, as well as 25 fixed paylines. The available bets range from the minimum of £0.10 up to the maximum of £100 per spin. There’s also an autoplay feature included for if you’d like to sit back and watch your winnings build up without constantly pressing the spin button.

What’s exceptionally great about this game is its visually appealing graphics, and the soundtrack/background noises that make it feel exactly like you’re aboard a vessel in search of new land.

The wild symbol that is included in this game is represented by a terrifying sea snake. This will substitute for all other symbols in order to make a winning combination, and will appear on reels two, three and four only. Should it feature in a winning combination, the wild will then expand to cover the entire reel, offering up further opportunities.

The coloured compass is the game’s bonus symbol, and acts as a scatter icon. Spinning three or more of these will provide you with the bonus round of freespins. There’s 10 freespins available for three scatters, 20 freespins for four scatters and five scatters will give you 50 freespins of the reels.

So, it’s time to go exploring with 1429 Uncharted Seas!