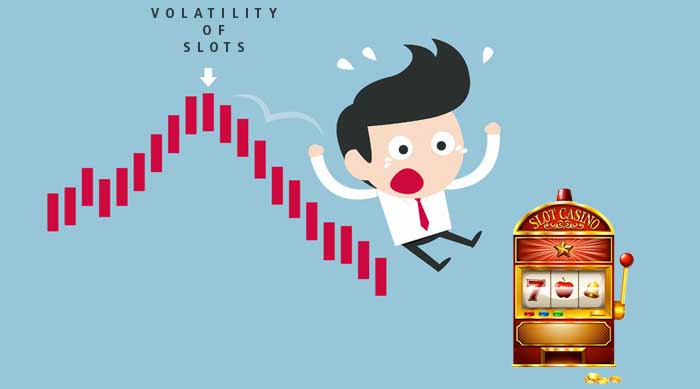 A lot of people see the words variance and volatility used to describe online slots without actually knowing what those words mean. They’re two words that mean essentially the same thing, and on the most basic level, they describe the chances of having large, wild swings in your sessions. Variance is a term in statistics that describes how far from the mean (ie: the average) most of the sample will be. The larger the variance or volatility, the more chances you have for big swings.

Understanding the volatility of slots

Unless you’re given the right way to think about it, variance is something that’s difficult to get a feel for in the real world. We’re going to give you a quick example that will help you to develop that feel.

What you’ll notice here is that you’ll win an average of $1 each time you flip the coin or roll the die. However, you’ll have much larger chances of losing several games in a row when you roll the die than when you flip the coin. That means the player’s advantage (much like the player’s RTP in slots) stays the same, but the variance changes substantially. The variance of the coin flip is fairly low, and the variance of rolling the die is much higher.

How the variance of a slot machine affects play

When you have a high level of variance, you increase your chances of having a losing session, but you increase the value of your wins the times that you come out on top. Along these lines, it will affect your play by causing you to be more likely to bust out before you actually get around to hitting a big winning session. To compensate for this, you should use smaller bet sizes with high-volatility (another word for variance) slots. Ideally, you would also play longer sessions to give yourself a better chance to smooth out those swings with some big wins, but not everyone has time for that.

The point is that, in an ideal situation, you’d end up betting the same amount on a high-variance slot as you would a low-variance one, but you’d just do it differently by making more bets of a smaller size.

How to determine the volatility of a slot machine

You can get a reasonable idea of the level of volatility for an online slot by looking at how balanced the pay table and bonus features are. If there is a lot of value concentrated in the top prizes or bonus features, especially if those features are fairly rare, then you probably have a high-volatility slot. Progressive jackpot games are a great example of this. On the other hand, if the top payouts are relatively low, and there are a lot of small and medium prizes with a high hit-rate, then chances are you have a low-volatility slot on your hands.

A good example of an online slot with a low level of variance is the Incinerator online slot powered by Yggdrasil. This game’s top payout on a single win is just 200x, but it’s designed so that you can get several wins on the same spin. The hit-rate is extremely high in this game, and value isn’t tied up in some rare bonus feature that rarely happens, as a result, players could enjoy this game with larger bet sizes than usual just because the variance is so low.

On the other end of the spectrum, an example of a particularly high-variance game would be Mega Moolah, the huge progressive jackpot game powered by Microgaming, and at the time of this writing, the world record holder for the largest online casino jackpot in history. This game always has a progressive jackpot of at least $1 million, and there are other top payouts like a five-figure static jackpot and a value-packed free spins bonus feature. All of this comes at the expense of small and medium wins, and the hit-rate is pretty low, so the overall volatility is very high. Other noticeable high variance slot machines are Raging Rhino from WMS, Mega Joker from NetEnt and Dead or Alive from NetEnt, to name a few.

If you look in the middle of the variance spectrum, you’ll find games like Net Entertainment’s Starburst slot. There are some small, medium and large wins in this game, and there’s a bit of value available in the bonus feature. However, they don’t go so far in either extreme that the game’s variance becomes clearly high or clearly low, so you end up with a nice, balanced game.